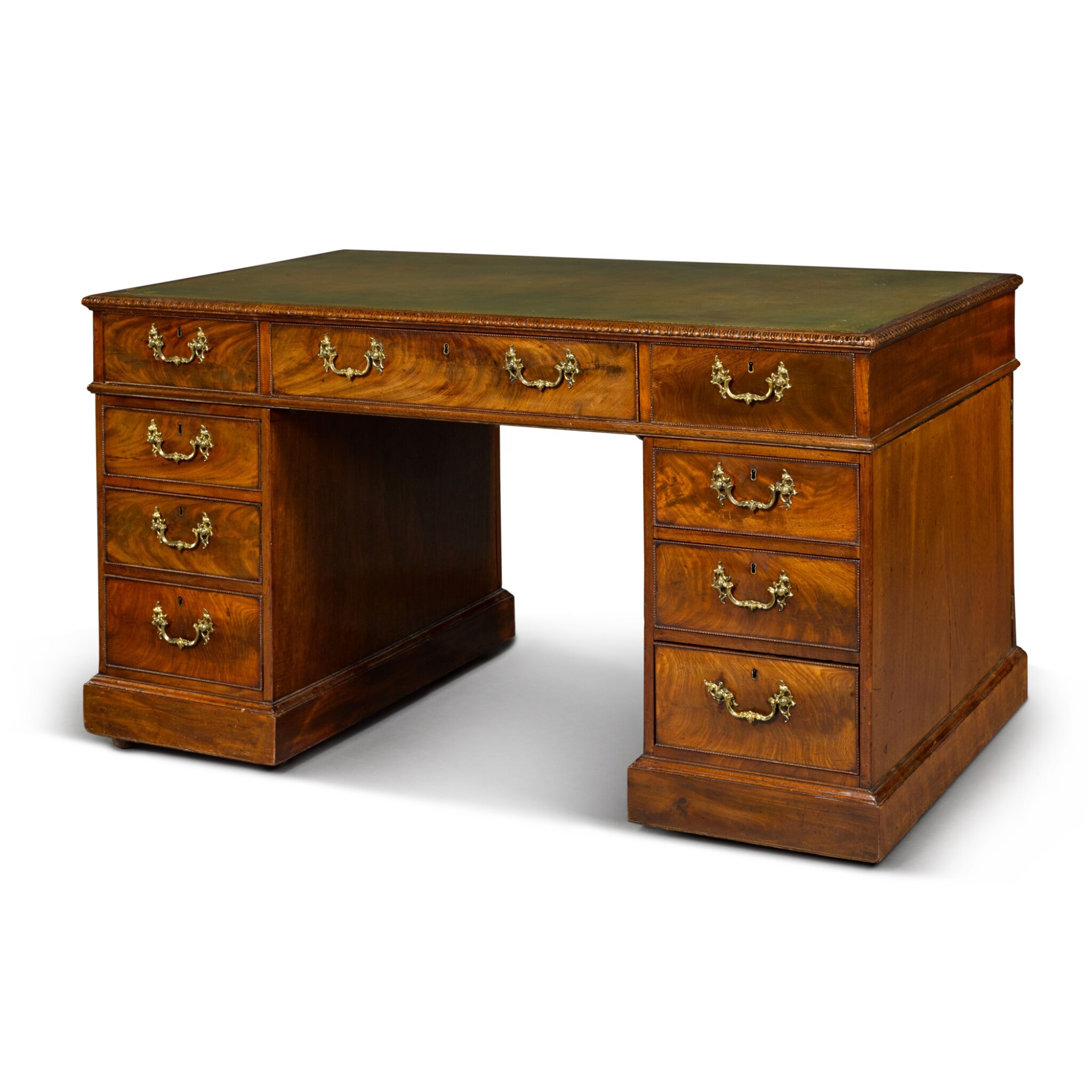 the later leather inset top with a leaf carved moulding above three frieze drawers and three drawers in either pedestal, the reverse side with a dummy drawer in the centre, all drawers with carved rope pattern edges, with gilt-brass handles and escutcheons in the rococo manner, flanked by drawers either side and with cupboards in each pedestal, one pedestal cupboard enclosing the two remaining folio slides, on concealed wooden castors

A smart desk in overall reasonable restored condition but would benefit from further attention. The later leather inset top in good order. Rubbing to carved detail notably to moulded edge of top. Some losses to beading of drawer fronts and evidence of some repairs and replacements. Similarly there are some losses and replacements to veneers notably to banding of top. Pedestals with age splits to interior and exterior sides. One cupboard door with age split and lower hinge of this door is detached from pedestal and there is a notable split to the timber near this site. One drawer with detached lock which will need to be reattached. Generally with typical minor old marks scuffs and scratches consistent with age and use.

The form and quality of cabinet work exhibited on the present desk are commensurate with the St Martin's Lane syndicate of cabinet makers whose output is epitomised by the leading 18th century furniture designer and manufacturer Thomas Chippendale. Furthermore its configuration, handles and dimensions are similar to those on a library table supplied to William, 5th Earl of Dumfries for Dumfries House, Ayrshire, Scotland, circa 1759 (see Christopher Gilbert, The Life and Works of Thomas Chippendale, 1978, 2 vols., vol. II, p. 236, figs. 431 and 432). Pierced gilt-brass rococo handles such as those on the offered lot are a variant of a rococo design frequently used by Chippendale and his contemporaries, although it is unclear whether these were typically sub contracted to outside suppliers such as William Bent who was based in St Martin's Lane, being one of many braziers in London who could have provided this service (see Gilbert op. cit., vol. I, p.45). Another instance of a closely related handle found on a documented Chippendale piece is on a commode recorded at Goldsborough Hall, illustrated ibid. vol. II, figs. 226 and 270.

Comparable desks with attributions to Chippendale which have recently appeared on the market include an example with related plinth carving, sold Sotheby's New York, 21 October 2004, lot 31 and another of more rectilinear form sold Christie's London, 3 July 1997, lot 50.