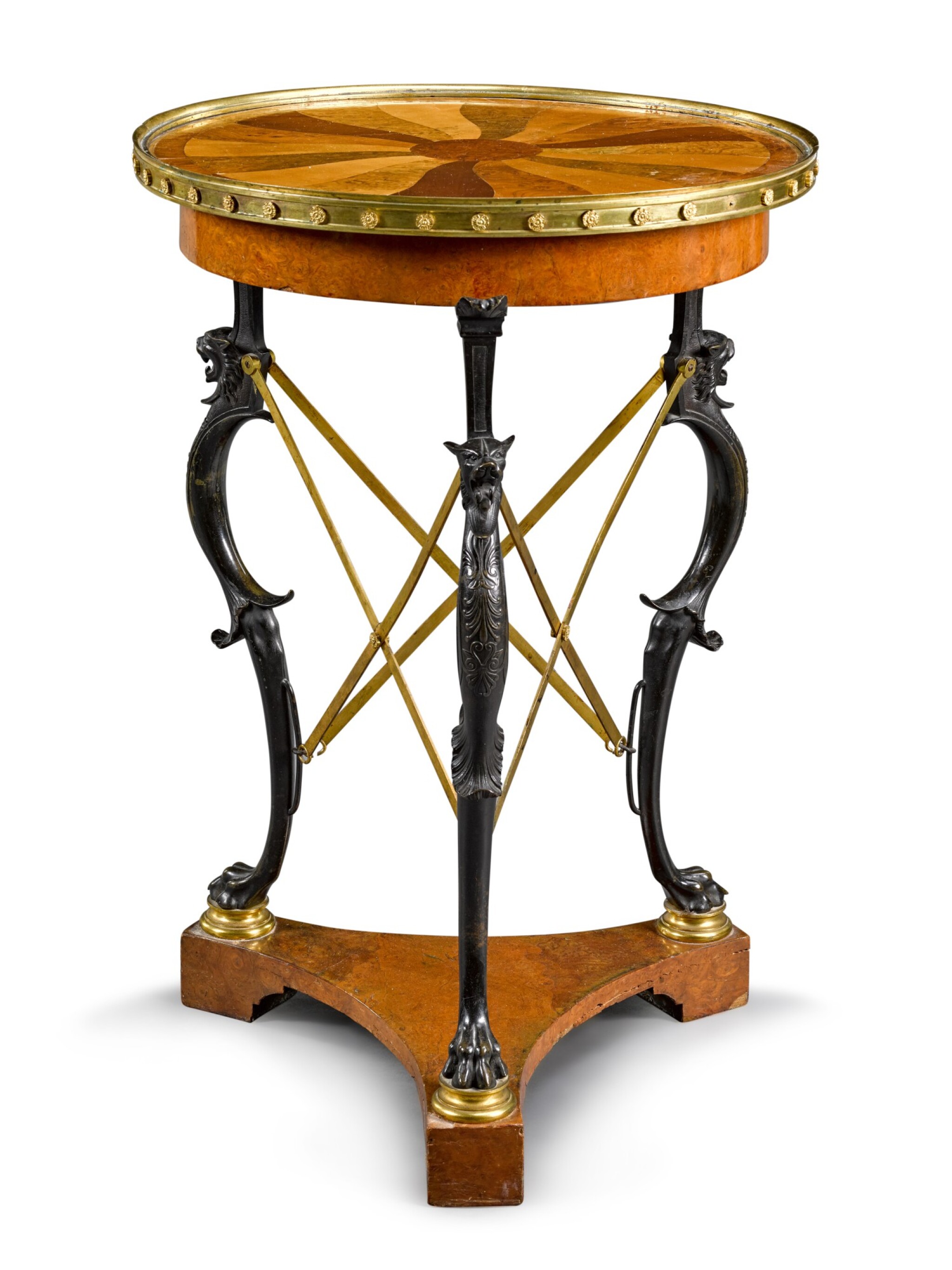 with a specimen wood top above three lion monopedia joined by 'X'-form gilt-brass rods, on a veneered concave tripartite base, the stamp of Louis-Philippe, Duc d'Orléans (1773-1850), later King Louis Philippe I (1830-1848)

In overall good condition. The top with very minor scratches, as to be expected given age and use.The gilt bronze with very minor scratches and old marks, consistent with age. Some rubbing and scratches to patinated bronze supports. With a detachable glass protective top. The veneered based with some minor scuffs and some age cracks with some associated veneer lifting, one chip to one corner. Ready to place.

A symbol of the Antique revival and of the neoclassical style, the present gueridon is modelled after a Roman Antique folding tripod supporting a removable basin dated from the 1st century AD. Excavated at Herculanum, the tripod is today in the collections of the Louvre Museum, Paris (inv. no. BR2576). A gift from Ferdinand IV to Napoleon Bonaparte in 1802, the tripod was then in the collections of the French diplomat and important art collector Edmé-Antoine Durand (1768-1835), who then sold his collection in 1825 to Charles X.

The discoveries at Herculanum (1715) and Pompeii (1755) are undoubtedly important historical events and gave birth from the late 18th century to an Antique revival in furniture designs. The discovery of the Herculanum tripod and its arrival in French collections must have stirred a great fascination amongst artists and art connoisseurs at the time. From the collections of Louis-Phillipe I, Duc d’Orléans, King of the French (1830-1848), cousin of Charles X, it is clear that the ébéniste who executed this gueridon had a direct access to view the tripod as the guéridon’s base is almost in every respect similar to that of the Herculanum tripod and features the claw feet, stylized foliage, feline masks and X-shaped rods.

The design of the Herculanum tripod was widely used throughout the 19th century and many cabinetmakers re-used the model and the feline masks and x-shaped rods as supports for atheniennes and gueridon tables. For example, a similar example was offered at Christie’s Paris, 16 December 2008, lot 294. The design for a plateau or stand, with comparative stylised monopodia supports, by Ferdinand Levillain and cast by Barbedienne, was illustrated in the 1889 Gazette des Beaux-Arts (reproduced in J. Meyer, Great Exhibitions, Antique Collectors club, 2006; p. 276, H28).