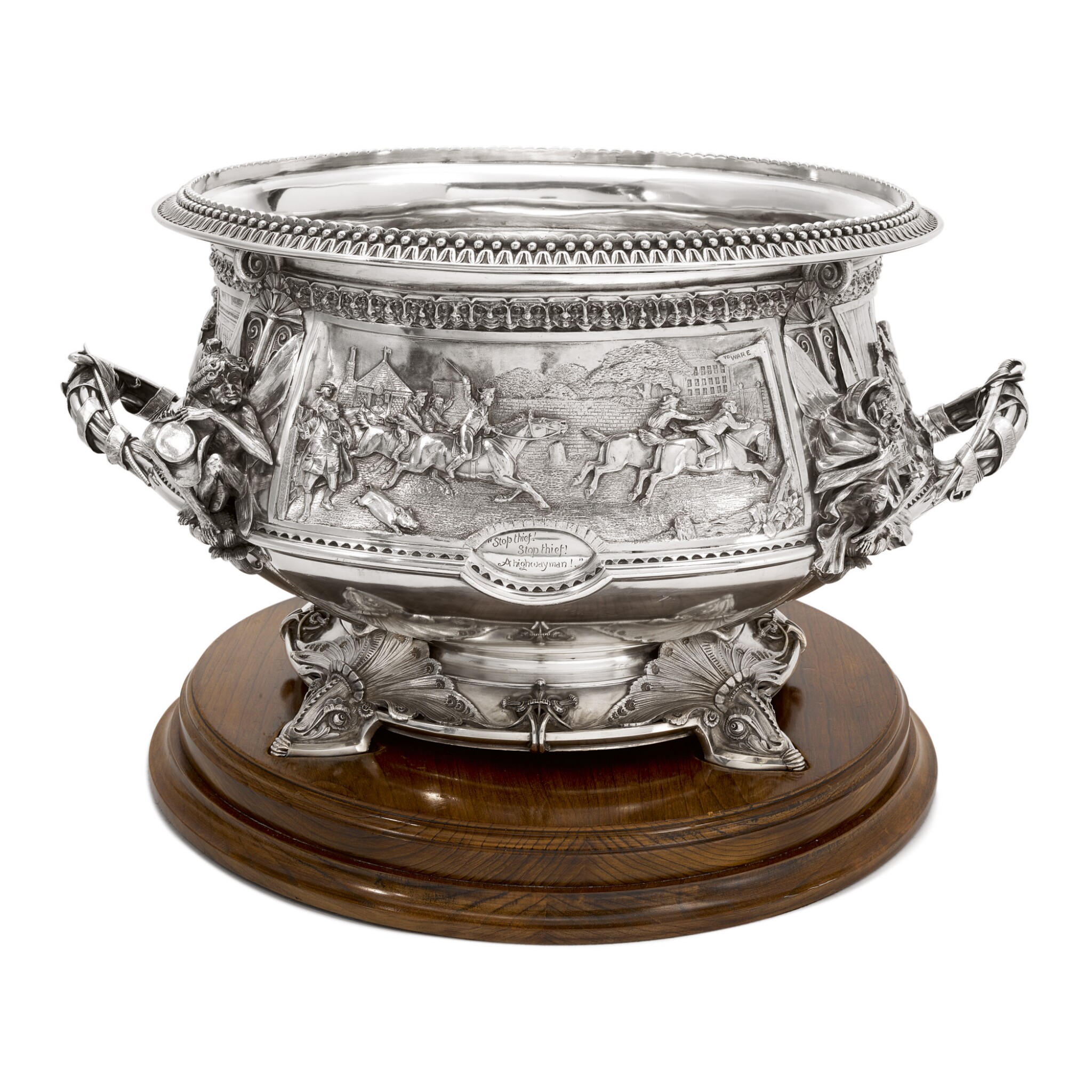 circular, raised on four bracket feet capped by butterfly wings, cast and chased with four scenes from the poem John Gilpin by William Cowper, each scene separated by fantastic figures in full-relief, belt-tied twig handles incorporating swords and whips, all below a border of goblin masks, the scalloped rim applied with bead and wrigglework, on a wood plinth

length over handles 21 in.

A few minor dings, otherwise good condition. The wood base with some surface scratches.

The scenes shown are taken from the following verses of William Cowper's poem John Gilpin:

Each bottle had a curling ear,

Through which the belt he drew,

And hung a bottle on each side

To make his balance true.

The dogs did bark, the children screamed,

Up flew the windows all;

And every soul cried out, "Well done!"

As loud as he could bawl

Not one of them was mute;

And all and each that passed that way

Did join in the pursuit.

And Gilpin, long live he;

And when he next doth ride abroad

May I be there to see!

John Culme has found that this bowl was “The Stockbridge Cup”, run for at Stockbridge Races, Hampshire, Thursday, 30 June 1881. The prize was £300 and the cup this “circular two-handled bowl, with panels representing in high relief Gilpin’s ride to Edmonton, which was supplied by Messers Hunt and Roskell, of New Bond st.” The winner was Charibert, a chestnut by Thormanby out of Gertrude, who in 1880 had a series of wins at Ascot, Newmarket and Brighton. He was owned by Robert Charles de Grey Vyner (1842-1915), who shortly thereafter inherited Newby Hall, Yorkshire, with its wonderful Robert Adam interiors.

This Stockbridge Cup was also shown by Hunt & Roskell at their New Bond Street premises in December 1893 at a loan exhibition of works of art in silver “which for costliness, artistic design, and excellence of workmanship are far beyond comparison with the ordinary presentation ‘pieces of plate’… the Stockbridge Cup of 1881, won by Charibert, and lent by Mr. R.C. Vyner, which has for its subject the story of John Gilpin's ride to Ware, several panels illustrating the humorous incidents of the story” (The Sporting Life, London, Saturday, 23 December 1893, p. 5).