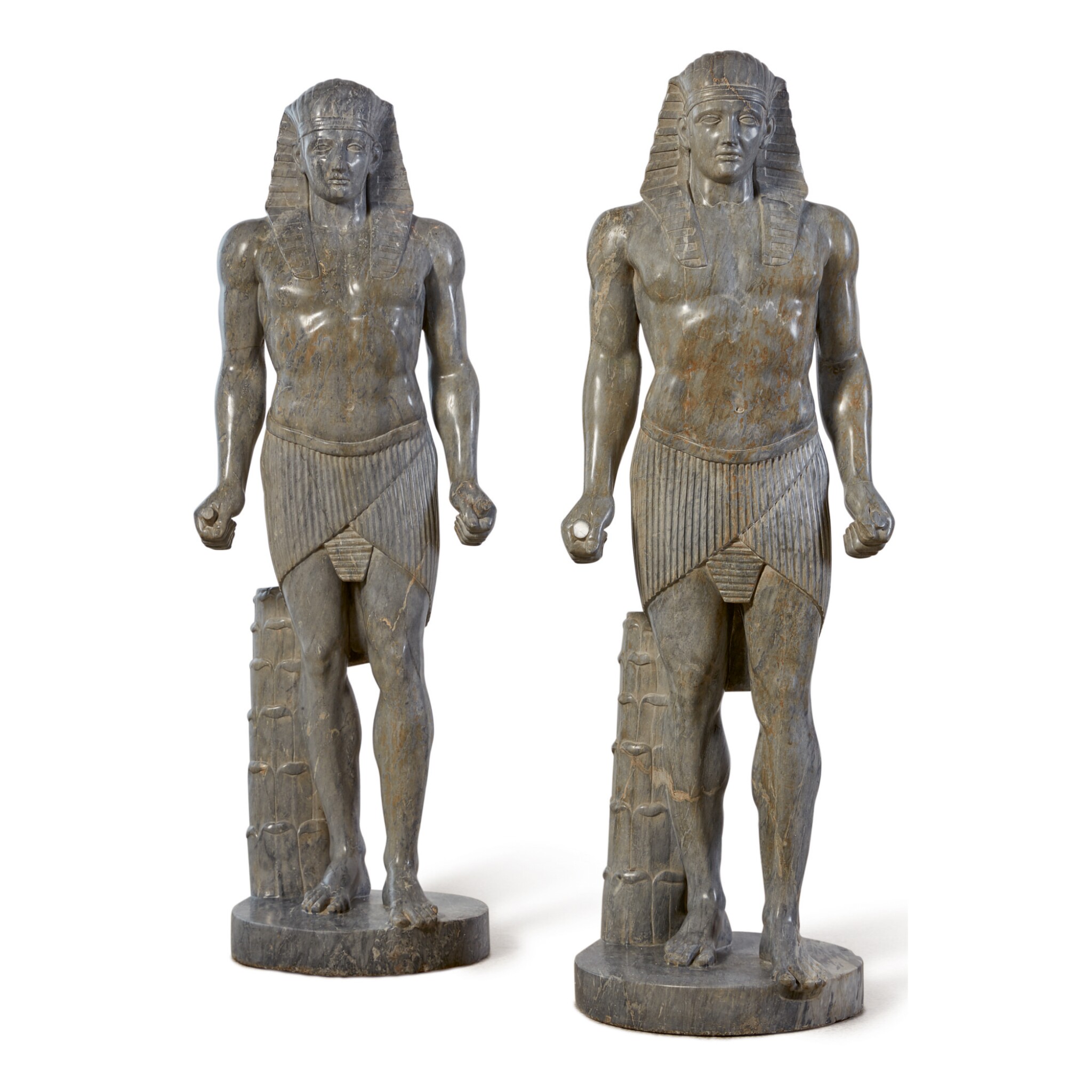 height of figures 5 ft.; height of pedestals 32 in.

﻿ Some wear and cracks, possibly inherent, and small chips to bases on both figures. Surface discolouration present, more pronounced on one figure and visible in catalogue photographs. Wooden pedestals in good condiiton with scattered marks, rubbing, and losses to painted and gilt surface decoration.

The young favourite of the Emperor Hadrian, Antinous drowned in the Nile during an Imperial visit to Egypt in 130 AD, and the heartbroken Emperor had Antinous deified and ordered shrines to be built throughout the Empire. Due to the nature of his death, Antinous was often depicted as the Egyptian god Osiris wearing the traditional nemes headdress, and the most famous surviving example of this iconography is an over life-size statue unearthed at Hadrian's Villa in Tivoli in 1740 and displayed from 1742 in the Capitoline and from 1838 in the Vatican Museum.

The Antinous statue quickly captured the public imagination and was reproduced by both Piranesi and Hubert Robert among others, contributing to the burgeoning interest in Egyptian taste as part of the broader neoclassical revival of the later 18th century. Cardinal Albani incorporated a pair of copies of the Vatican statue in his Roman villa constructed between 1747 and 1767, and versions were recorded in the gardens of the Villa Borghese and the Palazzo Barberini.

North of the Alps, a virtually identical pair of figures flank the door of the Blue Hall at the Palace of Ostankino near Moscow (Turchin, 1979, pl.99). The palace was built between 1792 and 1798 by Count Sheremetev and his wife Princess Cherkasskaya. The majority of interior decoration was executed by Russian architect P. Argunov. In England the collector and connoisseur Thomas Hope had a version in his London house-museum in Duchess Street, visible in Plate VIII of his seminal Household Furniture and Interior Decoration (1807).

In France, the sculptor Pierre-Nicolas Beauvallet (1750-1818) produced a copy after the Vatican statue for the neo-Egyptian Fontaine du Fellah in the Rue de Sèvres in Paris, built in 1806, and a pair of bleu turquin marble Antinous figures attributed to Beauvallet and comparable to the offered lot are now in the Musée Marmottan Monet, Paris.