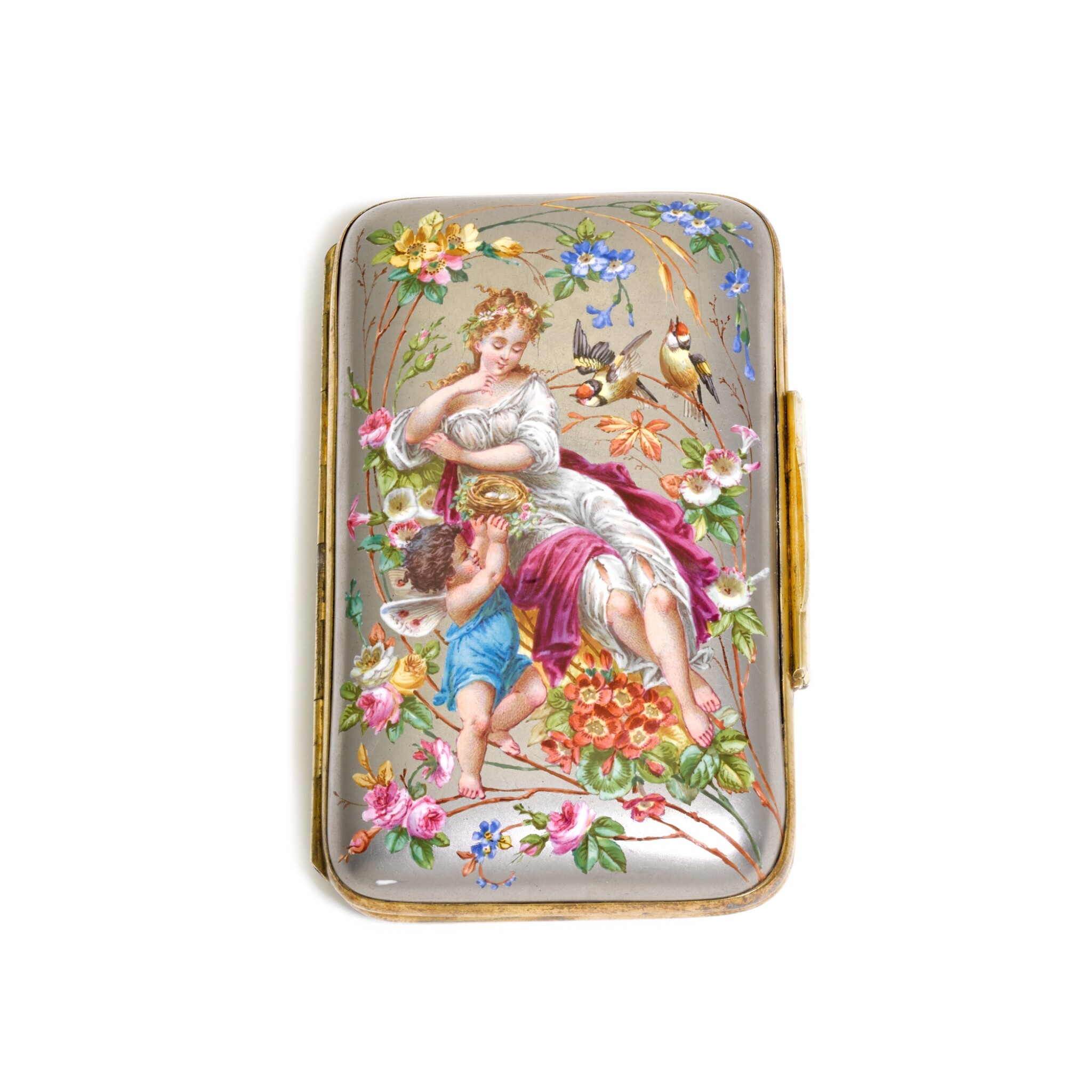 rectangular with rounded corners, the front elaborately painted with a young lady contemplating a bird's nest held by a butterfly-winged putto, within brightly painted flowers and two singing robins on a twig, the reverse painted with two robins feeding their fledglings in a nest, surrounded by abundant flowering plants, the interior painted with with robins and tomtits, one drinking from a shell-shaped bird bath, the others flying around colourful floral foliage, fitted with scrolling silver-gilt clips, rectangular thumbpiece, maker's mark, date letter for 1882, sovereign's head duty mark

A ravishing case in good condition; some wear to the reverse and front lower left corner

The workshop conducted by Henry William Dee (1822-1896) and his brother, Louis (1832-1884) at Sherrard (now Sherwood) Street in London's Soho district was among the most interesting in Victorian London. While both men styled themselves a jeweller or wholesale jeweller, it is clear from surviving objects in gold and silver struck with their respective maker's or sponsor's marks that they demanded exceptional craftsmanship. The same can be said of their father, Thomas William Dee (1792-1869) who about 1827 established their business, together with a partner, John Peter Fargues (1781?-1851).

One of the specialities of Dee's enterprise was their expertise in mounting, as with this present visiting card case. The painted porcelain body, probably imported from Bohemia, is delicately mounted in silver-gilt while the interior is fitted with two sprung clips of thick scrolled wirework, a characteristic feature of Dee's work.

Both T.W. and H.W. Dee retired, respectively in 1867 and 1880, when the business was described as 'jewellers and silversmiths'. Thereafter Louis Dee was the sole managing partner until his early death at the age of 52. Following Louis Dee's death his business was assigned to Leuchars & Son, retail dressing case makers, stationers and silversmiths of Piccadilly who were in turn assigned in 1888 to Asprey & Co.

Ironically, the way that the silver and jewellery business as a whole was traditionally conducted, the names of the actual manufacturers, like Dee & Sons, was unknown to the buying public. Ask any customer at that time who was familiar with London shops dealing in luxury goods and few if any would have known of Dee's existence. And yet, their workshop supplied all the best shops in London and even some in Paris. Royal commissions came their way too, as with a Russian-style 18 carat gold cigarette case, 1874, applied in enamel and rose-cut diamonds with the cypher of Albert Edward, Prince of Wales (later King Edward VII). This object, which was almost certainly originally supplied through the Crown Jewellers, R. & S. Garrard & Co., was sold for £12,500 at Sotheby's in the sale of the Romanov Heirlooms: The Lost Inheritance Of Grand Duchess Maria Pavlovna, on 30 November 2009 (lot 78).