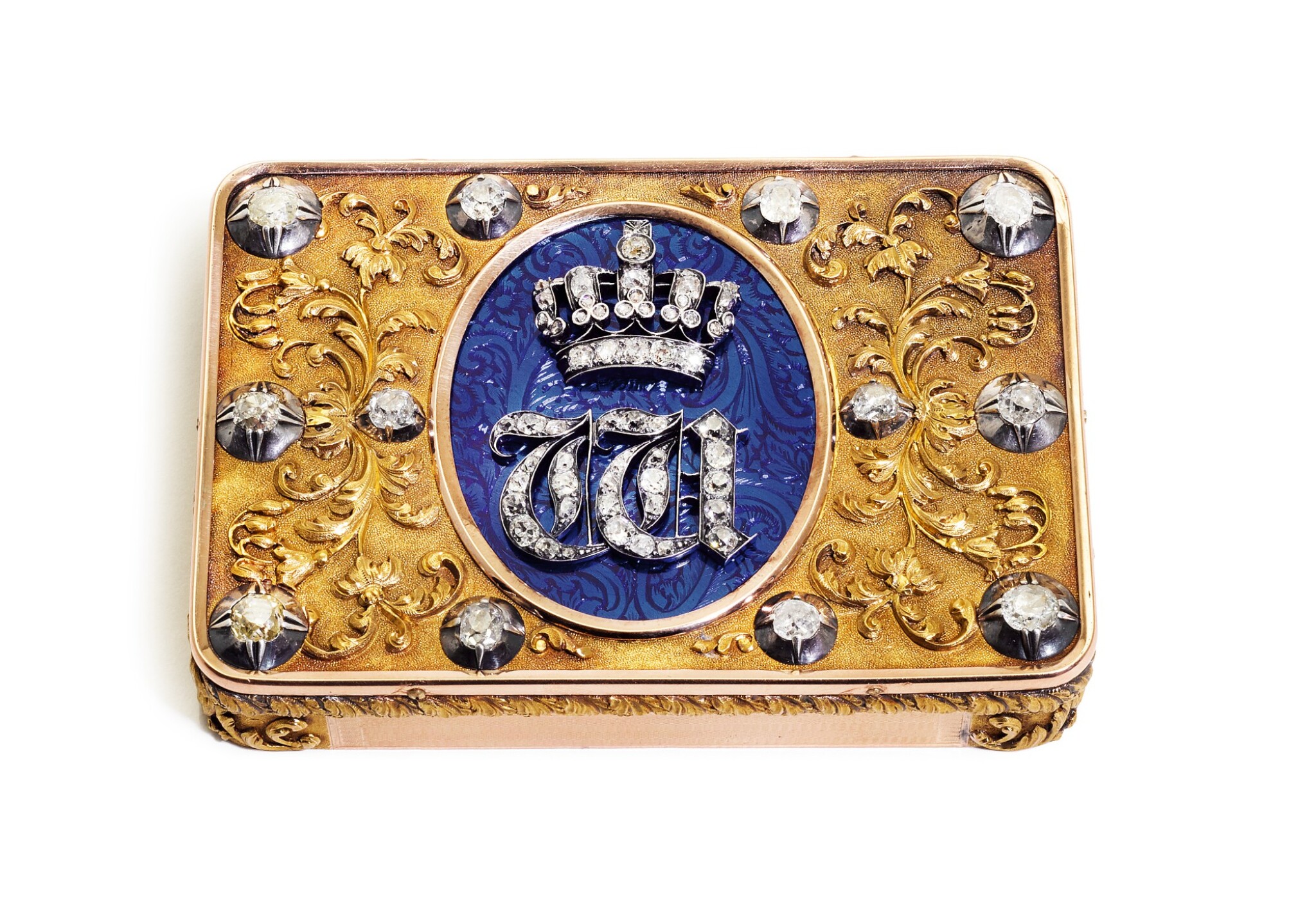 rectangular with rounded corners, the lid later applied with the rose diamond and paste-set cipher of William II, King of the Netherlands, on translucent blue damask enamel, within scrolling foliage and framed by collet-set diamonds and pastes, the sides and base with geometrically engine-turned central panels within leafy borders on a sablé ground, the inside of the lid engraved with a presentation inscription reading 'Presented/TO CAPTAIN THE HON.BLE A. N. HOOD / GROOM IN WAITING TO THE QUEEN / BY HIS MAJESTY WILHELM II / King of the Netherlands / August 8th 1845, apparently unmarked

Smart general appearance, hinges probably replaced, the lid lining has possibly been out, very few scratches around the pins on the side of the lid

The recipient of this box was the Hon. Alexander Nelson Hood, later a general in the British Army, who was the eldest son of Samuel Hood, 2nd Baron Bridport (1788-1868) and his wife, Charlotte, 3rd Duchess of Bronté (1787-1873), daughter of The Rev. William Nelson, 1st Earl Nelson and 2nd Duke of Bronté (1757-1835), brother of Vice-Admiral Horatio Nelson, 1st Viscount Nelson and 1st Duke of Bronté (1758-1805). Admiral Samuel Hood, 1st Viscount Hood (1724-1816) was his paternal great-grandfather, of whom Lord Nelson had said that he was 'the best Officer, taken him altogether, that England has to boast of.'

The occasion of the gift of this box was the visit to England of King William II of the Netherlands. 'Yesterday morning [8 August 1845] Viscount Hawarden and the Hon. Captain A. Nelson Hood, the Lord and Groom in Waiting to the Queen, who were selected for the honour of attending his Majesty during his sojourn in this country, had respectively an audience of the King, when his Majesty, in gracious terms, expressed his obligations for their kind attentions, and presented each of them with a valuable gold snuff box, studded with brilliants, bearing a miniature likeness of his Majesty [sic], as a souvenir of his visit.' (The Standard, London, Saturday, 9 August 1845, p. 3b)