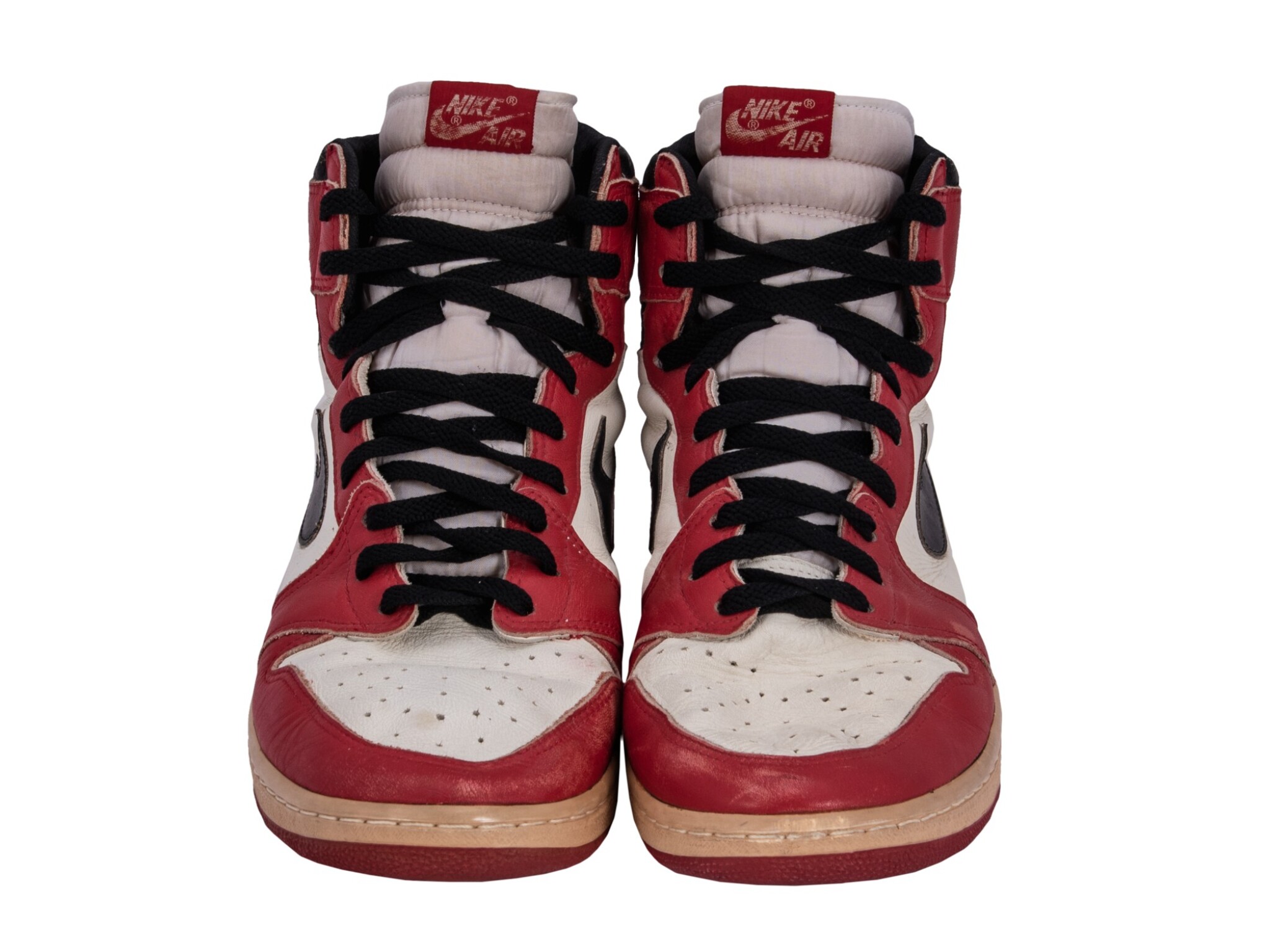 Despite the emergence of Magic Johnson and Larry Bird, the NBA was still battling its way out from the down decade of the 1970s. By 1984, both Johnson and Bird had won two NBA Titles and the game was becoming more popular. The Chicago Bulls were given the gift drafting behind two teams that were in desperate need of centers. The Houston Rockets selected Hakeem Olajuwon with the first overall pick and the Portland Trail Blazers selected Sam Bowie. Left waiting at the number three pick was Michael Jordan, a guard from North Carolina, who bypassed his senior season.

Jordan, unlike any player in the history of the league, propelled not only the Chicago Bulls into prominence, but ushered in a new era of aerial basketball and marketing. Nike, recognizing the talents and marketability of the young charismatic player, signed Jordan to a shoe contract. Offered is a pair of Nike sneakers worn by Jordan during his rookie season and have been attributed to the March 5th, 1985 game against the Washington Bullets. Jordan led all scorers with 37 points, while adding 9 rebounds and 8 assists as the Bulls came away with a 104-99 win. As with other documented Michael Jordan personally game worn shoes from 1985, these two shoes are actually different sizes, specifically size 13 for the left shoe and size 13.5 for the right shoe. The sneakers with this discrepancy were made based upon the specific requests of Michael Jordan himself. The manufacturers code inside each shoe states “850102-TYPS” with the last two letter of “PS” referencing “Player Sample” and were shoes not meant for general release. The “01” and “02” in the “850102-TYPS” code are for January and February respectively, indicating that these sneakers were made for Jordan to use during the second half of his rookie season.

These sneakers feature a red and black color scheme to match the Chicago Bulls. The outsides of the shoes are red, along with the heels and ankle supports. The rest of the sneaker design is white with black laces, black Nike “swoosh” on both sides, and black trim above the red ankle support. The soles of the sneakers are red and display excellent game use. According to the “Footlocker Approved” website, “In 1985, Nike gave Jordan and his signature line of sneakers and apparel a unique logo - clearly, this line was created to be very different from Nike's previous basketball efforts. Designer Peter Moore was given the task of coming up with the first Air Jordan shoe. The Air Jordan 1 featured the Nike Swoosh on the mid panel and a newly designed wings logo on the upper ankle. The first Air Jordan was similar in design to other popular Nike models released in the 1980s such as the Air Force 1, Terminator and Dunk. The Air Jordan 1 featured a Nike Air unit for heel cushioning, padded foam ankle collars for additional protection and a toe overlay for added lockdown.” These sneakers display moderate game use with the white leather toe areas displaying notable creasing, consistent with legitimate game wear. There is heavier use on the left shoe and scuff marks found on the back heels are also consistent with game use. These sneakers come with a LOA from MEARS (317517) for the game use, along with a letter of provenance from Brett Van Tich, who states he obtained the shoes from a gentleman Jordan gifted them to after the March 5th, 1985 game.