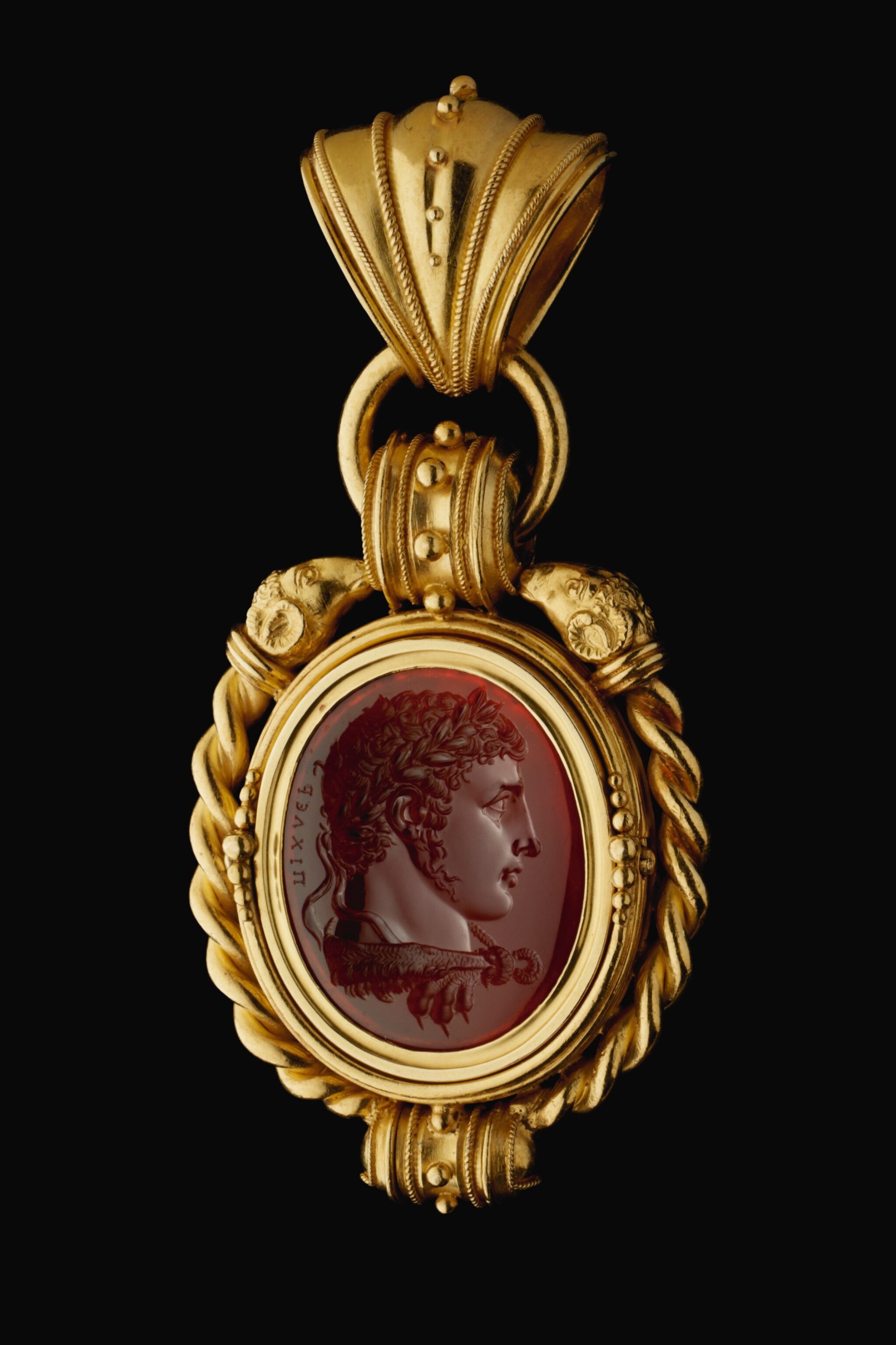 INTAGLIO WITH A VICTORIOUS YOUTH AS HERCULES

signed: PICHLER in Greek in reverse

carnelian, within an elaborate pendant mount, possibly by Castellani

Overall the condition of the intaglio is very good with minor dirt and wear to the surface consistent with age. The gem is superbly engraved and retains its beautiful original highly polished surface. There is a very small natural vein or fissure (possibly due to a percussion point) above the signature between the left edge and the hair. There is very minor natural veining to the stone, including a barely visible vein running from below the signature to the jaw. There is some minor dirt between the stone and the mount. A few minutely small specks to the surface of the stone. The mount is in good condition with general wear consistent with age. The clasp does not fully close. There is a very slightly visible original joint at the suspension loop.

This superb intaglio is one of the finest carvings by the celebrated Roman gem engraver Luigi Pichler to have been on the market in recent years. It shows a young man wearing a laurel wreath in the guise of Hercules, with skin of the Nemean lion about his shoulders.

Luigi Pichler heralded from a distinguished lineage of gem engravers. His father Antonio and his half brother Giovanni were both gem cutters and he assumed the running of the family studio in 1791. He went on to work for the Habsburg Imperial family in Vienna and so impressed the French court jeweller François-Régnault Nitot that the latter tried to persuade him to move to Paris. Pichler received many distinctions later in life including a diploma from the Academy of St Luke and membership of the Academy in Venice, as well as, in 1839, Knight's Cross of the Order of St Gregory the Great and, in 1842, of the Order of St Sylvester.

The suspension hoop of the pendant mount is very close to those seen on a necklace with gems signed by Pichler in the Albion art collection and published by Diana Scarisbrick, The Art of Gem Engraving: From Alexander the Great to Napoleon III, exh. cat. Hakone Open-Air Museum and Fukuoka City Museum, 2008, p. 286, no. 371. The present mount differs from the Albion mounts in having rams head terminals as opposed to serpentine motifs.