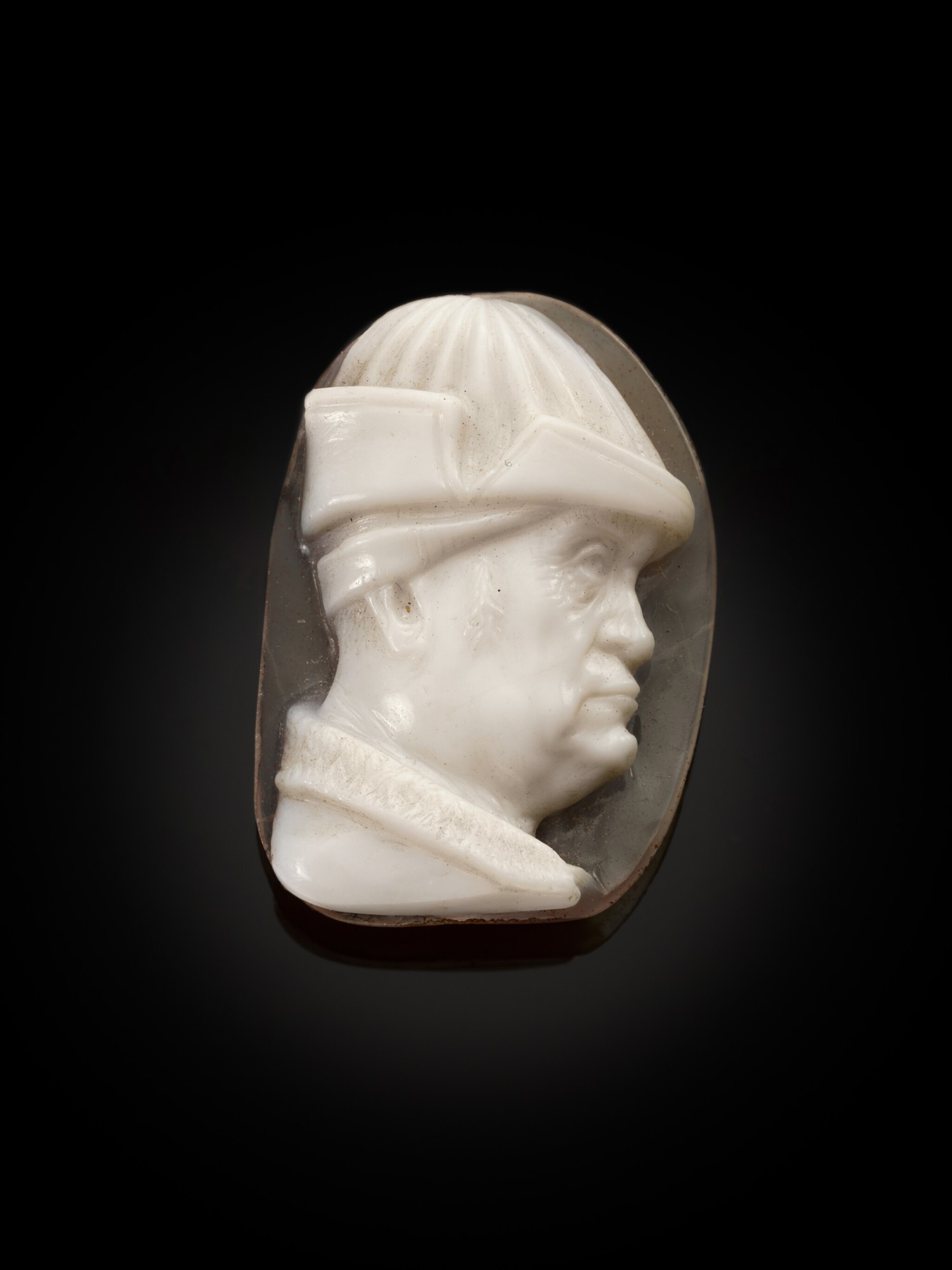 Overall the condition of the cameo is very good with minor dirt and wear to the surface consistent with age. There is a possible small chip to the end of the clothing on the proper right side. There is a small dirt filled inclusion or original hole to the reverse of the nose (visible only from the side), and another possible very minor one to the reverse of the mouth. There are very minor abrasions to the edges of the pink layer (including to the bottom). Dirt to the crevices. There is natural veining including two very slightly visible veins (or a possible percussion point) in the form of an X in the pink layer, one of which runs diagonally through the stone (visible to the reverse).

As one of only four known 15th-century cameos with the profile of René of Anjou, this characterful portrait carved in two-layered onyx is a rare treasure. Duke of Anjou, titular King of Naples, and father to Margaret of Anjou, wife of King Henry VI, René was a pioneering patron of the arts and is recorded to have commissioned at least two cameo carvers with his portraiture. Excitingly, the present cameo may now be added to the existing corpus of contemporary hardstone depictions of the King, which exemplify the re-emergence of glyptic portraiture before the High Renaissance.

The survival of René of Anjou’s account books provides a valuable testament to his artistic patronage, as well as a precious documentary source concerning the history of early Renaissance glyptics. In November 1452, René is recorded to have paid 8 écus d’or for a cameo with his portrait carved by the ‘lapidaire’ Jehan Saillart, while Thomas Pigne, ‘faiseur de camahyeuz’, was remunerated for a cameo with the King’s head, and another with his bust, in August and September 1477 (d'Agnel, op. cit., nos. 870 and 962). According to his books René also acquired numerous gems bearing other, mostly religious, subjects, of which some he had mounted and gave away as gifts. Given his evident proximity to glyptic artists, it is likely that more cameo portraits of René were made in his lifetime. Indeed one such stone, mounted in a jewelled setting, is mentioned in a royal inventory at Fontainebleau castle in 1560, while another, surrounded by 12 emeralds, was recorded at Pau Castle in 1562 (see Scarisbrick 2008, op. cit. p. 69).

The most famous of the surviving cameos portraying René of Anjou is the example in the British Museum, London (32mm., inv. no. 1890,0901.16), which was formerly in the collection of Henry Howard, 4th Earl of Carlisle (1694-1758). Carved in three layers of sardonyx, it depicts the King in profile wearing a grooved hat with a feather over a skull cap, and a coat with a fur collar. Distinguished by bushy eyebrows and a sideburn, the sitter’s advanced age is emphasised by a pronounced engraving of facial lines and sagging flesh, in particular around the eyes, mouth, and neck.

A second, slightly smaller (25mm.), version of this portrait type in three-layered sardonyx is now in the collection of Guy Ladrière, having once been owned by Caroline Bonaparte (1782-1839). It compares closely to the British Museum cameo in the treatment of the stone and the King’s facial features, but differs in the appearance of the headgear – here a fur hat without skull cap – and the more simplified truncation below the collar.

A third cameo portraying René of Anjou in profile is housed in the Cabinet des Médailles de la Bibliothèque Nationale in Paris. Formerly in an English collection, it was purchased for the Cabinet from Alain Moatti in the 1980s and published in 1989 (Giard, op. cit.). Seeming to portray a younger King than the above-mentioned examples, it is stylistically quite distinct. The smallest of the group (18mm.), it is carved in two-layered onyx, like the present cameo, with the King’s head in white and the background in a colour described by Jean-Baptiste Giard as ‘café au lait’. The King’s hat is near-identical to that seen in the Ladrière cameo, but lacks the feather whilst being here worn over a skull cap. The collar has a tubular appearance, and the King’s features are smooth, plump and somewhat idealised, betraying fewer signs of age, though suggesting a certain degree of physical decline in the subtle modulation of the nasolabial fold and jaw.

The present cameo, which hails from the eminent Nuremberg collection of August Merklein (1865-1940), appears to combine elements from all three of the above examples, whilst not obviously being based in either style or imagery on a single prototype. Using a similar material and technique as the Paris cameo, it shows the King in a manner more analogous to the British Museum and Ladrière examples, with pronounced wrinkles around the eyes, chin and neck, which are, however, incised more subtly and delicately here. A grooved hat with upturned edges worn over a skull cap, the King’s headgear is comparable to that worn in the London cameo, but again lacking the feather. The depiction of the collar, on the other hand, finds its closest parallel in the Ladrière stone.

The variations between the above cameos are, of course, explained by the known fact that René of Anjou was portrayed in hardstone by at least two, and most likely more, different craftsmen. Indeed, in the presence of tantalising records regarding named gem carvers at René’s court, attempts have been made in the scholarship to ascribe the surviving glyptic portraits to artists working in the King’s orbit. Knowing of only the British Museum example, Dalton (op. cit.) proposed a tentative attribution of the stone to the cameo carver Thomas Pigne mentioned in René’s books, about whom and whose oeuvre little else is known. Prior to this (Forrer, op. cit., p. 71), the London cameo had been brought into association with Pietro da Milano (1410-1473), the north Italian sculptor and medallist who created the King’s medal portrait in 1462, upon which the cameos may in part – though not wholly – be based (see example in the British Museum, inv. no. 1936,0117.1). A similar approach was taken by Giard (op. cit.), who argued for an attribution of the Paris cameo – clearly by a different hand – to the enigmatic Dalmatian sculptor Francesco Laurana (1430-1502), who is celebrated for his marble portrait busts. Laurana was called to René of Anjou’s court twice to execute sculptural commissions; on the first occasion he modelled a medal portrait of the King and his wife (dated 1463, example in the Münzkabinett, Staatliche Museen Berlin, inv. no. 18218542), while in the last decade of the King’s life, he frequented his court in Provence. Indeed, the King’s facial appearance in the Paris cameo is remarkably close to Laurana’s 1463 medal, while it may be said that the sitter’s smooth, almost classicising features correspond to Laurana’s artistic vision. In the absence of other cameo carvings securely attributed to Laurana, however, this attribution remains little more than a compelling hypothesis.

It could perhaps be argued that the Paris cameo is the earliest of the group, and based on Laurana’s medal from the 1460s. The other three cameos may then represent the work of separate carvers who followed a depiction of the King in his more advanced years, with a physical appearance closer to his likeness in the Matheron Diptych by Nicolas Froment (Musée du Louvre, Paris), which was completed in 1480, the year of René’s death. Since we know from the records that cameo portraits of the King were made within the extensive timeframe of at least 1452 to 1477, such an hypothesis is certainly plausible. Stylistic comparisons for all four cameos, including the present example, can be drawn with Italian glyptic portraits made in the second half of the 15th century by largely anonymous carvers. The veristic treatment of facial features, with heavily incised lines and modulations in the flesh, finds a parallel in the shell cameo portraying Cosimo il Vecchio in the Museo degli Argenti, Florence (inv. no. Gemme 1921, n. 211), thought to have been carved in a Florentine workshop. The same museum preserves an analogous, emphatically engraved late 15th-century onyx portrait depicting a nobleman from the House of Bourbon (inv. no. Gemme del 1921, n. 110). A close stylistic comparison for the present cameo, on the other hand, is found in a two-layered onyx portrait of Ludovico Maria Sforza, attributed to Domenico dei Cammei (inv. no. Gemme 1921, no. 109), which exhibits a similarly subtle treatment of surface textures and facial features. Although the gem carvers in René’s account books have French-sounding names, the fact that the titular King of Naples is known to have employed a number of Italian artist indicates that the present cameo could well be the work of an Italian, or Italian-trained, cameo carver.

It has been noted that few princes of his day boasted as many titles as René I. Among others, he was Duke of Anjou, Count of Provence, Duke of Bar, Duke of Lorraine and, between 1435 and 1442, King of Naples, a title he retained after his expulsion from Neapolitan control by his rival claimant, Alfonso V of Aragon (1396-1458). He retreated to France, finally retiring to Aix-en-Provence, having been more at home in the world of art and letters than political affairs. As well as being active himself in the fields of painting and literature – he wrote poetry, allegorical works, and a tournament book – René created a flourishing artistic environment at his court. He patronised numerous renowned painters and sculptors of his time, including Nicolas Froment (1435-1486) and Francesco Laurana, through whom he brought the Italian Renaissance style to the south of France.

Along with its three related examples, the present cameo represents a fascinating testament to René’s rich artistic patronage, and more particularly his role in the Italian-led resurrection of glyptic portraiture in the 15th century.