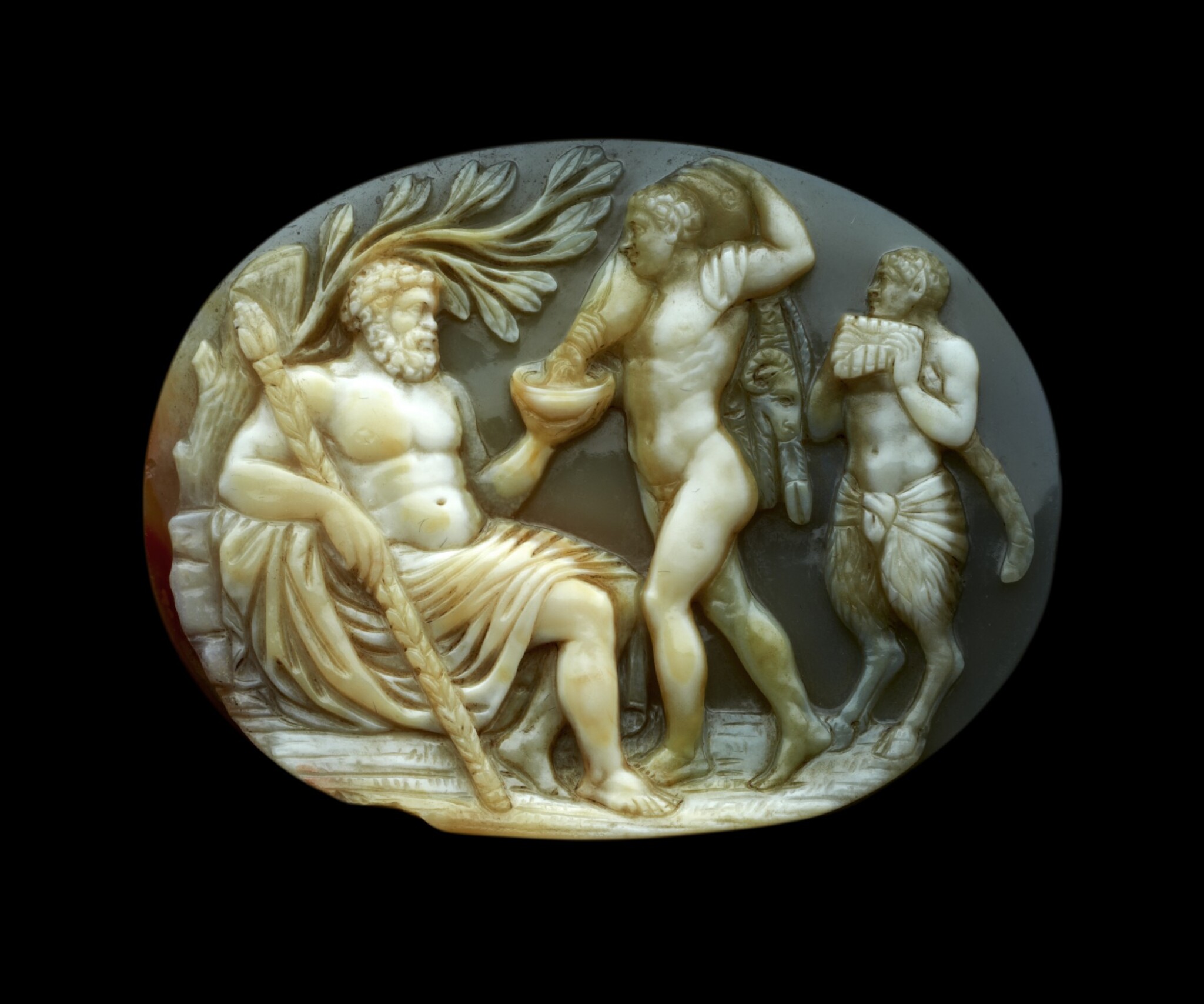 Cameo with Silenus attended by a Bacchant and a Satyr

with a label to the reverse printed: 420

Overall in very good condition with very minor surface wear and dirt consistent with age. A chip to the terrasse below the seated figure.

This highly accomplished cameo epitomises the fascination with Bacchic subjects held by ancient and Renaissance gem engravers alike. Its protagonist is possibly Bacchus, the god of wine, but with his full beard and portly body type, he is more likely to represent the elderly Silenus, his teacher and companion. Following a well-known iconography, Silenus is attended by a Bacchic follower who pours wine into his cup from a wineskin, while a satyr plays the pipes behind. Similar depictions of Silenus being thus entertained are seen in ancient Roman art, such as a relief in the Museo Nazionale Romano, Palazzo Altemps, which inspired Renaissance and Baroque versions of the motif, including a drawing for the 'Tazza Farnese' by Annibale Carracci (1560-1609).

In both subject and style, the present cameo is consistent with 16th-century Italian gem engravings based on antique prototypes. A number of similar cameos depicting Bacchic and other mythological scenes within a landscape are found, for example, in the Museo degli Argenti, Florence (Gennaioli, op. cit., nos. 51-54) and in the collection of the Duke of Northumberland at Alnwick Castle (Scarisbrick et al., op. cit., nos. 8 and 20). The gems in Florence in particular show an analogous figural style, with a bead-like rendering of hair that is characteristic of the period.

What distinguishes the present cameo is its superb quality of carving. Its engraver shows a rare sophistication in depicting anatomy, with pronounced musculature in the figures, and an astonishing degree of naturalism in minutely carved details, such as the ram's head on the Bacchant's cloak. The elaborate folds of Silenus' drapery convey the engraver's meticulous study of the antique, and compare, for example, to the drapes in a 16th-century cameo with the Sleeping Hermaphrodite (Gennaioli, op. cit., no. 57). Like many Renaissance cameos, the present gem was probably inspired by an ancient composition, which the engraver emulated with remarkable artistry.