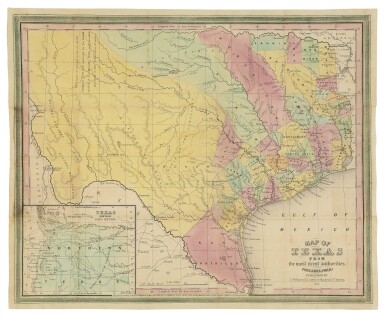 Map of Texas from the Most Recent Authorities. Philadelphia: Published by C. S. Williams, 1845

A rare pocket-map issue of an outstanding map published the year of annexation. The present copy, which was acquired at a Dorothy Sloan Rare Books auction, 14 February 2007, seems to be the only separately issued pocket version cited in the auction records. The map is most frequently encountered in its appearances in world atlases published by both Samuel Augustus Mitchell and Henry S. Tanner. Streeter had a copy of Tanner's atlas version preserved as a pocket map.