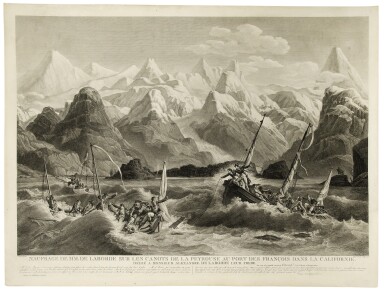 The loss of two launches during La Perouse's expedition in Lituya Bay, Alaska

"La Pérouse's expedition [aboard the frigates Astrolobe and Boussole] was one of the most important scientific explorations ever undertaken to the Pacific and the west coast of North America ..The charge to the expedition [which took place between 1785 and 1788] was to examine such parts of the region as had not been explored by Captain Cook; to seek for an interoceanic passage; to make scientific observations on the various countries, peoples, and products; to obtain reliable information about the fur trade and the extent of Spanish settlements in California; and to promote the inducements for French enterprise in that quarter...La Pérouse sent dispatches back to France from Kamchatka and Botany Bay. The two ships then set sail from Botany Bay, in 1788, and were never heard from again" (Hill).

In July 1786, La Perouse arrived at a majestic looking inlet off the southeast coast of Alaska. Naming the bay Port des Francais (present day Lituya Bay), La Perouse cautiously guided his ships into the fjord, eventually anchoring in the shelter of a small island at the head of the bay. After exploring and trading with local natives, on 13 July 1786, three small launches set sail back into the inlet to take soundings prior to the continuation of the expedition. Venturing too close to the entrance where the Pacific Ocean tidal currents created hazardous conditions, one of the boats capsized; the second boat (captained by Édouard Jean Joseph de Laborde de Marchainville) attempted to rescue the drowning sailors on the first, but suffered the same fate; the third boat, realizing the danger, returned to the safety of the inlet. In all, 21 sailors were lost.

The present engraving, after a painting by noted French marine painter Louis Phillipe Crepin, depicts the above scene, with the first boat sinking in the foreground, the second boat throwing a line at the right, and the third ship returning toward the head of the bay, with La Perouse's ships just visible behind the island at center left. The background is dominated by majestic snow-capped mountains, accurately depicted the beauty of the bay. As the title of the print suggests, the painting and engraving were done in honor of the fatal heroism of Édouard Jean Joseph de Laborde de Marchainville, who is depicted at the bow of the second boat throwing a line to the first launch, as well as his brother Ange de Laborde de Boutervilliers, who was aboard one of the two launches. The print is dedicated to their brother, French antiquary and Napoleonic politician Louis-Joseph-Alexandre de Laborde. The above scene is described in the second volume of La Perouse's official narrative, published in 1797; Crepin's painting is believed to have been done in 1806.