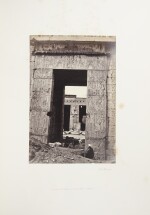 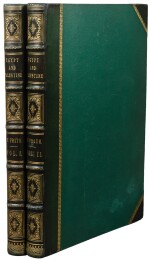 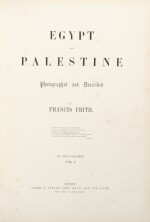 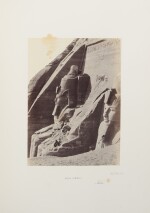 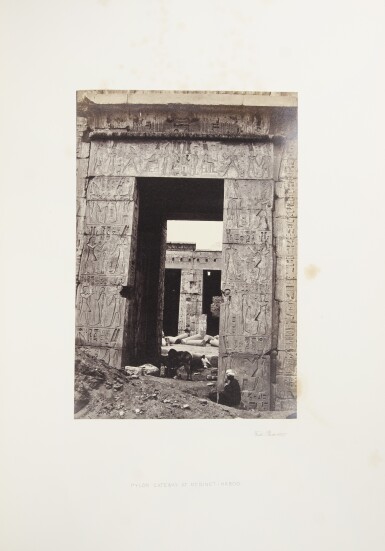 2 volumes, small folio (17 1/8 x 12 3/8 in.). 76 mounted albumen photographs, extra-illustrated with 3 additional images by Frith in the rear of Vol. 2, dated in the negatives 1873-1875; foxing, principally to the mounts. Contemporary half green morocco and green pebbled cloth boards, spine gilt with raised bands.

"One of the most renowned nineteenth century photobooks" (Parr & Badger).

By the mid 1850s, Frith had sold his grocery and printing businesses to devote himself full time to photography. Between 1856 and 1860, he made three expeditions to Egypt, Sinai, Ethiopia, and Jerusalem, photographically documenting Middle Eastern architecture and culture. "On the first, he sailed up the Nile to the Second Cataract, recording the main historic monuments between Cairo and Abu Simbel. On the second, he struck eastwards to Palestine, visiting Jerusalem, Damascus and other sites associated with the life of Christ. The final expedition was the most ambitious, combining a second visit to the Holy Land with a deeper southward penetration of the Nile. His photographs of the temple at Soleb, 800 miles south of Cairo, represent a genuinely pioneering achievement. Unlike many travel photographers of this period, Frith used the wet collodion process in preference to the more convenient paper-based calotype. Because it involved chemically sensitizing the glass plates on site, this process posed particular problems in a climate dominated by heat, dust and insects. Commenting sardonically on how his chemicals often boiled on contact with the glass, he nevertheless produced negatives that are remarkable for their consistently high technical standard ... Frith photographed most of the key monuments several times, combining general views with close studies of their significant details and broader views of their landscape environment. The clarity of his images proved to be of immense value to archaeologists. The photographs are also often powerfully composed, revealing an understanding of the poetic qualities of light that gives them lasting aesthetic value" (McKenzie, Grove Art).

The present work was the first published fruit of these travels, originally published in 25 monthly parts, with three images per part, between 1858 and 1859, with the parts re-issued upon completion in two volumes (as here). Although most famous for his much larger photographs (Egypt, Sinai and Jerusalem, 1862-63), Parr and Badger praise the artistry of the present images: "With the 9 by 7 inch view camera, Frith was liberated not only from the technical difficulties, but also from the aesthetic responsibilities of making a grand statement." Depicting landscapes, monuments and views, Frith's photographs of Egypt and the Holy Land established his reputation as one of the most important photographers of the 19th century. "It is for good reasons that Firth's views of Egypt and Palestine were the star attractions of the 1858 exhibition of the Photographic Society ... 'His subjects in Palestine and Egypt impress us with a consciousness of truth and power which no other art production could produce'" (Truthful Lens 30).

Many of the negatives, first printed here, were reused by Frith in later publications, including his deluxe edition Queen's Bible, and his four-volume set printed by Mackenzie in 1863.