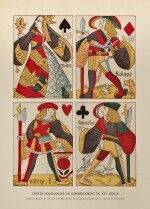 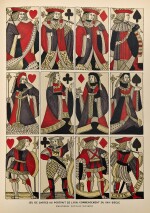 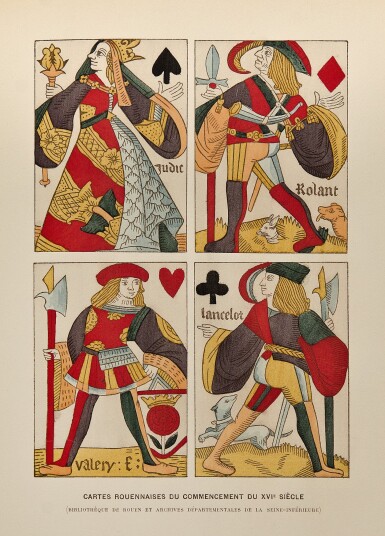 2 volumes, large 4to (12 5/8 x 10 in.). Titles in red and black, half titles, 180 plates, 122 of which colored and five mounted, numerous uncolored illustrations. Expertly bound to style in red half morocco over original boards, spine gilt-lettered, original hand-colored illustrated cream thick-paper wrappers folded and bound in at the front of each volume, top edge gilt; neat repair to foot of spine of Vol. I.

This exhaustive treatise covers the origins and evolution of the playing card from the earliest known examples in the Middle Ages, describing their evolution and the changing techniques employed in their manufacture, and offering notes on those involved in their trade. Also covered are the social aspects which surrounded playing cards, and games of chance and skill that developed, and towards the end of volume II is a valuable "Bibliographie des ouvrages sur les cartes à jouer". The period covered in this work is from the fourteenth to the beginning of the twentieth centuries. The title to the first volume notes that this work contains images of 3200 cards, with 956 in color, and in addition there are hundreds of uncolored illustrations, most reproducing earlier images. The printed note on the verso of the half-title of Vol. I "exemplaire imprimé pour Monsieur Bois" indicates that this issue is from a limited edition of some description; unfortunately, there is no other indication of how many copies were printed.