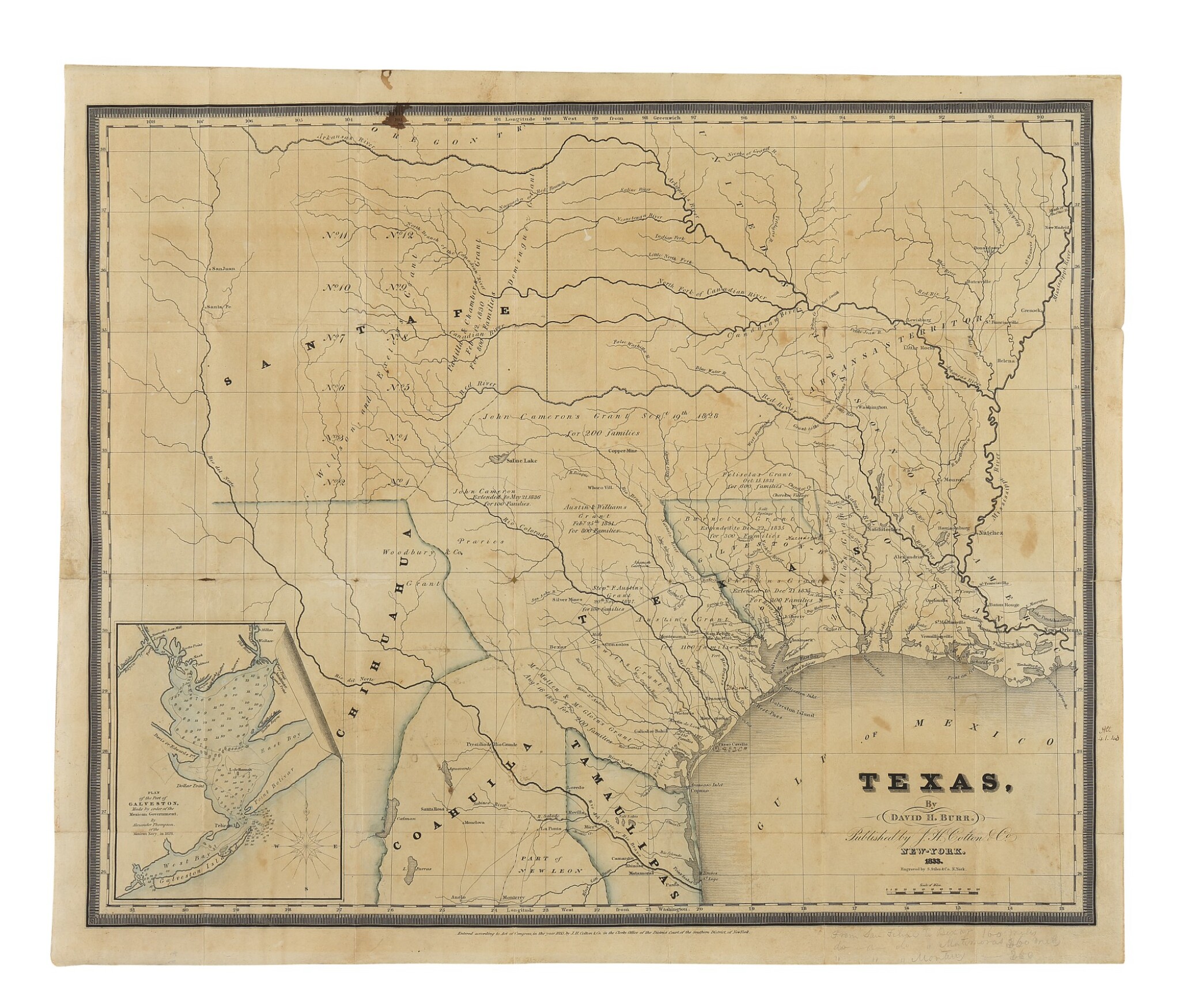 Engraved pocket map (22 x 18 1/2 in.; 561 x 470 mm), engraved by S. Stiles & Co., contemporary partial handcoloring in outline and blue wash, inset "Plan of the Port of Galveston, made by order of the Mexican Government, by Alexander Thompson of the Mexican Navy in 1828." Handsomely framed and double-glazed with UVIII Plexiglass. Tiny losses at intersecting folds, a few scattered fox spots, small ink stain at upper ornamental border and neat line. We are grateful to Dorothy Sloan for permission to incorporate portions of her description of this map.

First state of one of the most important and handsome maps of Texas ever printed, with significant contemporary annotations, including a manuscript map of Matagorda and Lavaca Bays on the verso.

The significance of Burr’s landmark map of Texas cannot be underestimated. Burr’s "early map of Texas remains a standard view of the area on the eve of the Revolution" (Contours of Discovery), and greatly increased emigration to the area: "Anglo-Americans in the early decades of the nineteenth century reacted quickly to the opportunities to settle in the rich lands made available to them through empresario contracts in the Mexican state of Coahuila y Tejas. Stephen F. Austin's 1830 map of Texas, showing his two grants and one to Green DeWitt, aroused great interest in Texas, both on the part of potential settlers as well as in the American government itself. In 1833, the Geographer to the United States House of Representatives, David H. Burr, updated Austin's earlier effort with a new map of Texas showing seventeen land grants. … With the inclusion of the new land grants, his map documented the explosion of immigration into Texas" (Martin & Martin).

Any copy of Burr’s 1833 Texas is a rare find—only one other copy can be traced in auction records in the fifty years since the Streeter sale—but the present example is further distinguished by the presence of a manuscript map of Matagorda and Lavaca Bays on the verso (approx. 5 7/8 x 7 1/2 inches; 150 x 190 mm). The rendering is similar to a portolan chart and appears to have been drawn by someone with first-hand knowledge of the Bay and its navigational vagaries and hazards, perhaps to show another Texas immigrant or sea captain how to safely enter the harbor at Matagorda. This excellent little map appears to be contemporary with the printed map, and apparently predates 1841/1842: Port Lavaca, which is not shown, was founded in 1841 in the aftermath of the 1840 Comanche raid on nearby Linnville; Port Lavaca was named in 1841 and laid out by 1842.

Although quickly drawn and annotated, the manuscript map is a very accurate representation of the important features of the Bay, showing hazards and sailing bearings of Matagorda and Lavaca Bays (much more accurate than Burr's rendering on the printed map). The person who created the manuscript portolan accurately depicts the several lesser bays and points within Matagorda and Lavaca Bays, specifically naming Indian Point, Cox's Point, Sand Point, and South Point (at the entrance to the Bay). Matagorda is shown as a sizeable town. Shoals and bars are represented by dotted lines. The seaward shore of Matagorda Island has the bearing SWW (southwest by west) indicating the lay of the shore. The safe route for a boat entering from the Gulf to anchorage at Matagorda is shown with a dotted line labeled "Ships Track." The approach to the harbor is noted as NWN (northwest by north), and the correct bearing for actual entry is given as "28°20'" (which is repeated in an ink note on the face of the printed map); a bold circle is drawn on Matagorda Island with the designation "Camp on Pin sula."

Matagorda and Lavaca Bays, with their ports and landings that are shown on the manuscript map, were extremely important in the early history of Texas as major point of entry for Anglo and other immigrants. The Colorado River, which flows into Matagorda Bay, was a major route to the burgeoning Anglo colonies in Texas in the early 1830s. The bays were a challenge to navigate, with a difficult passage and entrance having many treacherous bars and shallows; nevertheless, they provided the safest, most convenient harbors on the most direct route to Austin's colonies. By 1832, Matagorda had some 1,400 residents. As early as 1836, Mary Austin Holley reported a population of 200 at Cox's Point, another major point of entry for American immigrants.

This manuscript map is one of the few maps to contain a specific reference to "Indian Point," one of the most interesting and colorful sites of Texas geography and history. LaSalle's last ship ran aground near the site in February in 1686. Prince Carl of Solms-Braunfels landed at Indian Point in 1844 with one hundred German families. The town of Indian Point (later Indianola) was founded in 1846. During the Mexican-American War, Indian Point became firmly established as a deep-water port, achieving the rank of one of the two top ports in Texas. Indianola was tragically destroyed in two devastating hurricanes (1875 and 1886) and never rebuilt.

Also present on the verso are penciled notes in two different hands. One note is the title "Recopilacion de las layes [sic] de Indias." Above this, in a second hand are the city names "Mobile," "Washington," and "Boston," and below is a reckoning of persons' names and dollar amounts. The map itself is also neatly annotated in ink, locating “Nacogdoches” and “Bolivar” (on the Brazos River) and recording a compass bearing of “28°20'” at “Passo Cavello” on the printed map (the mouth of Matagorda Bay). A table of distances from San Felipe to Bexar, Matamoras, and Monterrey is written in pencil in the lower right margin.

While the significance of these annotations has yet to be clarified, the manuscript map itself is a more accurate representation of Matagorda and Lavaca Bays than found on most other contemporary maps of Texas drawn by professional cartographers. For all the importance of the Matagorda area as an entry point for shipping and immigrants, it is Galveston that usually drew the professional cartographers' attention, as is demonstrated by the outstanding inset on the Burr map. But for those who actually brought the goods and settlers to Texas, the matter of accurate knowledge of the harbor at Matagorda was important enough that in one case at least, it was shared in a map on the back of what is now an extremely rare pre-Republic map.

"The Burr map of 1833 is the first large scale map of Texas, as distinguished from a general map, to show all of Texas to the Arkansas River and also includes all of the Texas Panhandle.... The Burr map, like the Austin map, is one of the landmarks of Texas cartography" (Streeter). A unique survival, with contemporary cartographical annotation, of one of the most important maps in Texas history.