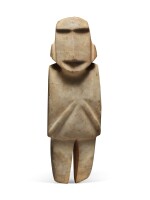 Overall excellent, has one clean break and repair on the proper upper right thigh. Remains of old clear adhesive around the repair. Could be properly removed.

Sir John Richardson, New York, probably acquired in the 1960s
The restrained, dignified stone figures of the Mezcala convey a sense of monumentality, like a Cycladic sculpture, or the great stone moʻai of Easter Island.

Using only the simplest tools, the Mezcala sculptor worked in stone, defining planes and cutting and sawing grooves to create a human figure, distilled to its essential form. As modern as it is ancient, the sober and hieratic bearing of this sculpture suggests that it must have had some profound significance; its creation was surely neither quixotic nor devoid of meaning. Perhaps, as Carlo Gay suggests, these figures “had some esoteric significance based in magic or religious principles. Probably, they are all inherently symbolic, conveying complex messages about beliefs of the living, and hopes of the dead.” (Carlo T. E. Gay and Frances Pratt, Mezcala: Ancient Stone Sculpture from Guerrero, Mexico, Geneva, 1992, p. 21).

This figure comes from the collection of Sir John Richardson, the art historian, biographer of Picasso, and inveterate collector. In his apartment the figure appeared alongside works by Braque and Picasso, Old Master Paintings, an exceptionally old We mask (see lot 49), ancient South Arabian sculpture, and narwhal tusks, amongst other extraordinary objects. As Richardson said, this “clash of disparate trouvailles gave my apartment its own special character.” (Alvilde Lees-Milne, The Englishman’s Room, London, 1986, p. 124).