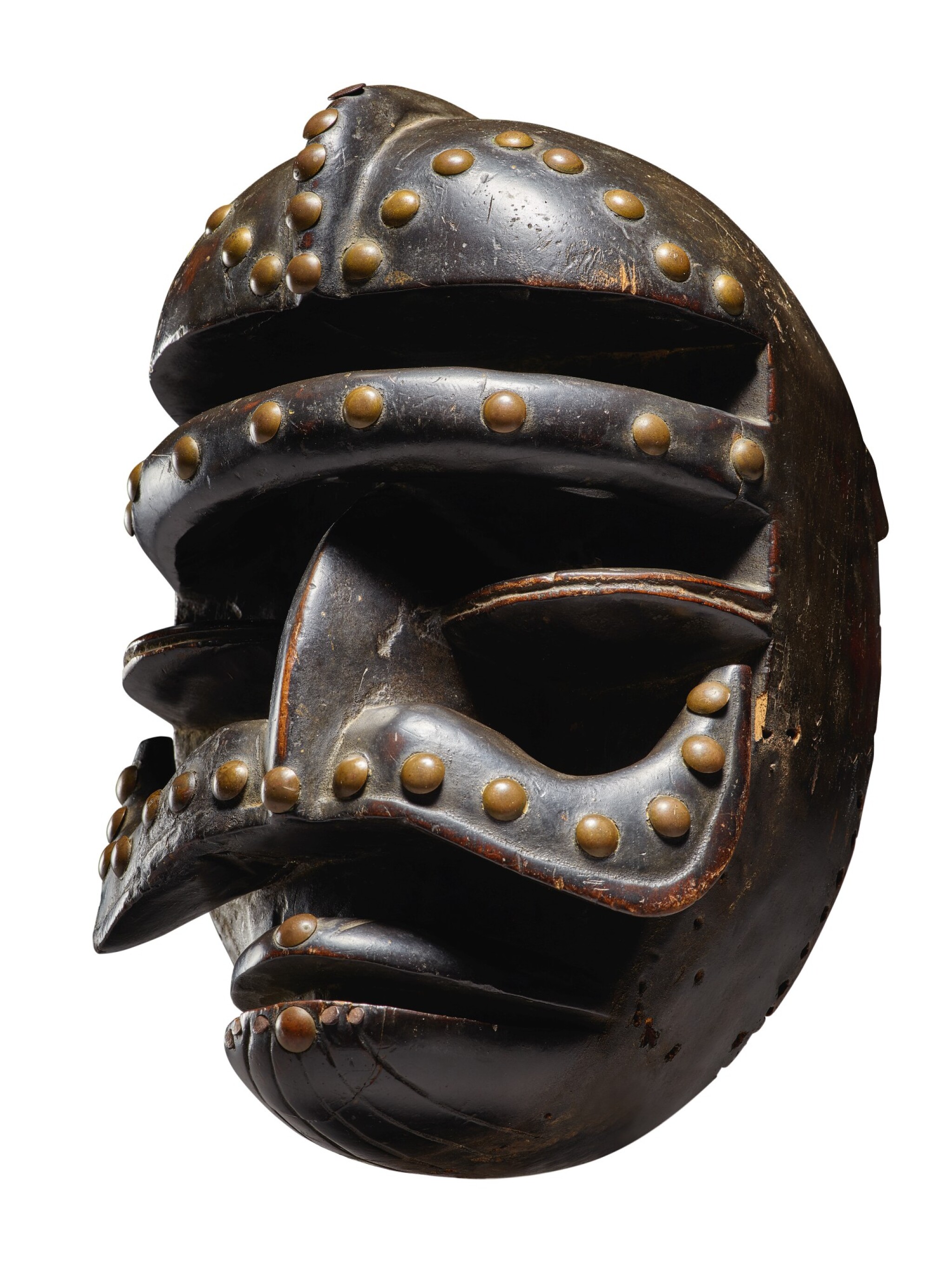 Very good condition overall for an object of this age and rare type. Minor marks, nicks, chips, scratches, and abrasions in places. An open crack to the proper left side of the "looped" horns above the eyes. Proper right side of the projecting tusk (from the nose) broken and glued with some traces of glue. Holes around the edge from previous attachments and an open chip to the front edge of the proper left side of the face. Bottom jaw broken in two places and glued. Has wall mount.

Baudouin de Grunne, Wezembeek-Oppem
Bernard de Grunne, Brussels
American Private Collection, acquired from the above in 1997
Los Angeles County Museum of Art, The Inner Eye: Vision and Transcendence in African Arts, February 26 - July 9, 2017
This is a mask of concentrated intensity and imposing presence. Historically identified as emanating from the Bete people, the origin of these masks is more subtle and more complicated, as the scholar Alain-Michel Boyer has recently argued.

Amongst the people known by the ethnonym of Bete – a term which encompasses several very different groups – it is only the western Bete, who live in western Côte d’Ivoire near the We and Nyabwa, who use masks of this type. Boyer states that the form “circulated [his emphasis] among these three ethnic groups” (Alain-Michel Boyer, We, Milan, 2019, p. 111) and that it was borrowed by the Bete from the Nyabwa. Boyer notes that “Nyabwa is the ceremonial language of the Bete for this mask” (ibid.), and that “Among the Bete, officiants use only Nyabwa so as to preserve the ‘authenticity’ of the ceremony” (ibid., p. 54; citing Marie-Noël Verger-Fèvre in Jean-Paul Barbier, ed., Arts de la Côte d’Ivoire, Geneva, 1993, Vol. II, p. 90).

In Boyer’s reading, all “distinction between the masks of the Eastern We, the Nyabwa and the Bete is artificial, since the brotherhoods that manage them are not curtailed by ethnic or dialectal barriers and readily perform in each other’s villages.” (ibid., p. 55). He continues, however, by noting that “amongst the Eastern We as well as the Western Bete, [masks] are commonly characterized by their majesty, their opulence […and] density of composition, multiplication of overlapping, stylized horns and tusks reaching out to the light in a constructed architecture, nostrils so hypertrophied that they sometimes resemble fins, sometimes the snout of a warthog curving up to the temples […]” (ibid.).

In the present mask we can see these attributes, which draw on the characteristics of several hostile forces of the forest; the large, curved, tusk-like projections, and the horns across the forehead, which here form a continuous “loop”, also found in certain other well-known examples, such as the mask from the Ross collection (ibid., p. 96, pl. 31). In this mask, the great depth and concentrated, compact volume of the carving add to the mask’s considerable sculptural power.