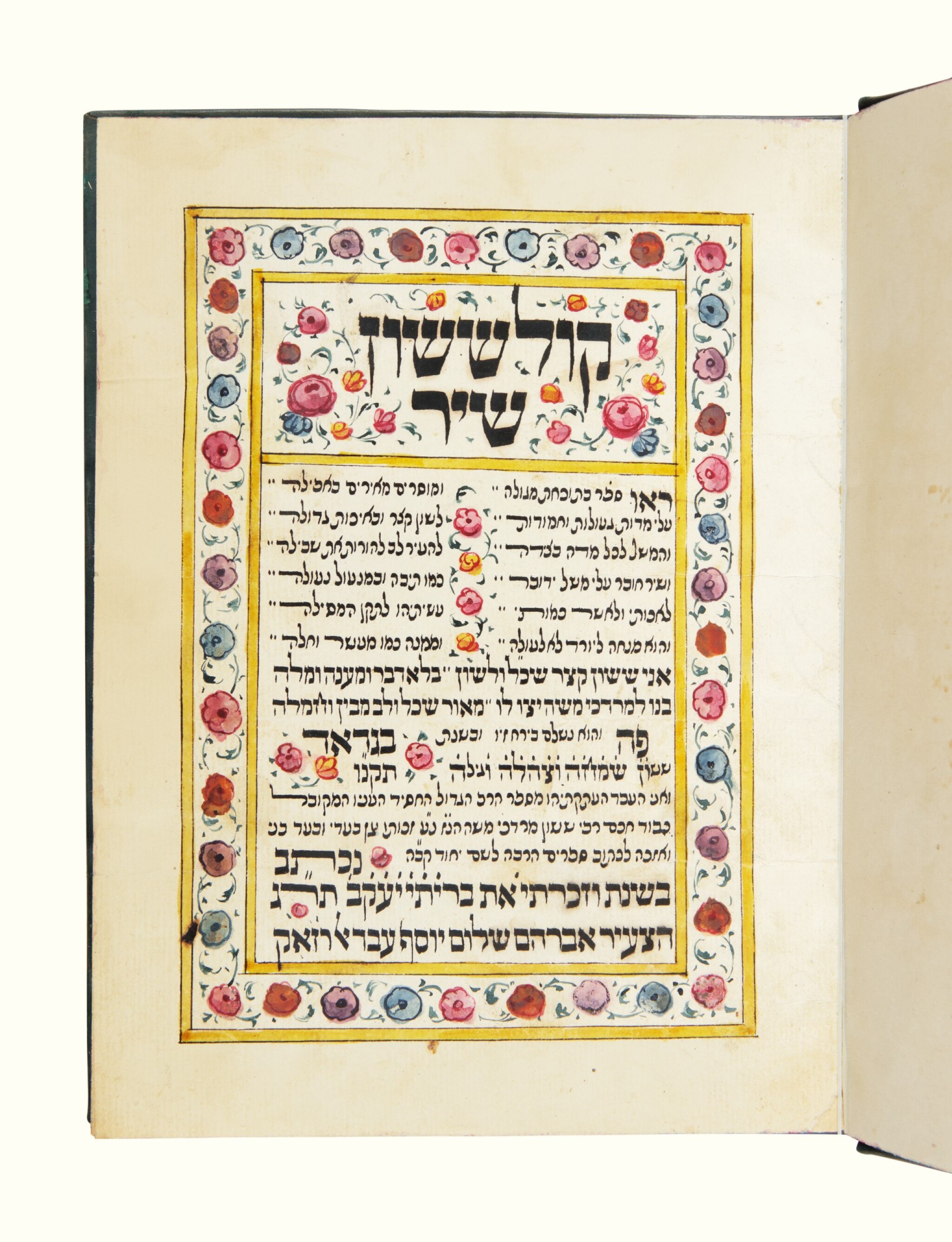 One of three known prepublication manuscript copies of this classic of Iraqi musar literature.

Rabbi Sason Shindookh (1747-1830), scion of a distinguished Baghdadi family, served numerous communal functions in his native city: mohel (circumciser), shohet (ritual slaughterer), sofer (scribe of ritual texts), overseer of marriages, and cantor, Torah reader, and preacher in the Great Synagogue. A polymath, he also authored or created numerous kabbalistic, halakhic, artistic, and poetic works, including a number of piyyutim (liturgical poems) still current among Iraqi Jewry. He had a particular interest in musar, to which the present text is dedicated. In forty-three chapters, Kol sason treats the main components of religious ethics, including themes like love and fear of God, repentance, proper etiquette, and various positive and negative character traits. These discussions are generally interspersed with stories, parables, and especially poems that help convey the chapter’s lesson.

Though Kol sason was completed in 1796, it was not printed until 1859, when it appeared in Livorno (it would subsequently be reprinted in Baghdad and several cities in Israel). In the intervening years, three known manuscript copies of the book were created, including the present lot and two volumes in the Meir Benayahu Collection in Jerusalem (B 210, dated 1834, and B 13, dated 1854). Their scribes appear to have relied on the same master copy, as evidenced by the formula used for their colophons and the names of chapters 25 and 26 given in their tables of contents. Moreover, some of the back matter found in the Sassoon copy—comprising legends selected from Joseph Sambari’s (ca. 1640-1703) Divrei yosef chronicle or one of its popular adaptations—is also present in the 1834 Benayahu exemplar.

The present volume’s scribe, Abraham Shalom Joseph Abdul Razzaq, was active in Baghdad in the mid-nineteenth century, signing a religious court ruling in ca. 1847 and several ketubbot in 1838, 1844, and 1864. In addition to the present work, he also wrote a charmingly decorated Baghdadi liturgy in 1860 (now part of the Gross Family Collection in Tel Aviv). His neat copy of Kol sason, in its elegant binding, constitutes a lovely representative of the Iraqi book art tradition.

3. Gifted by him to Moise Abraham Sassoon (annexed paper slip)