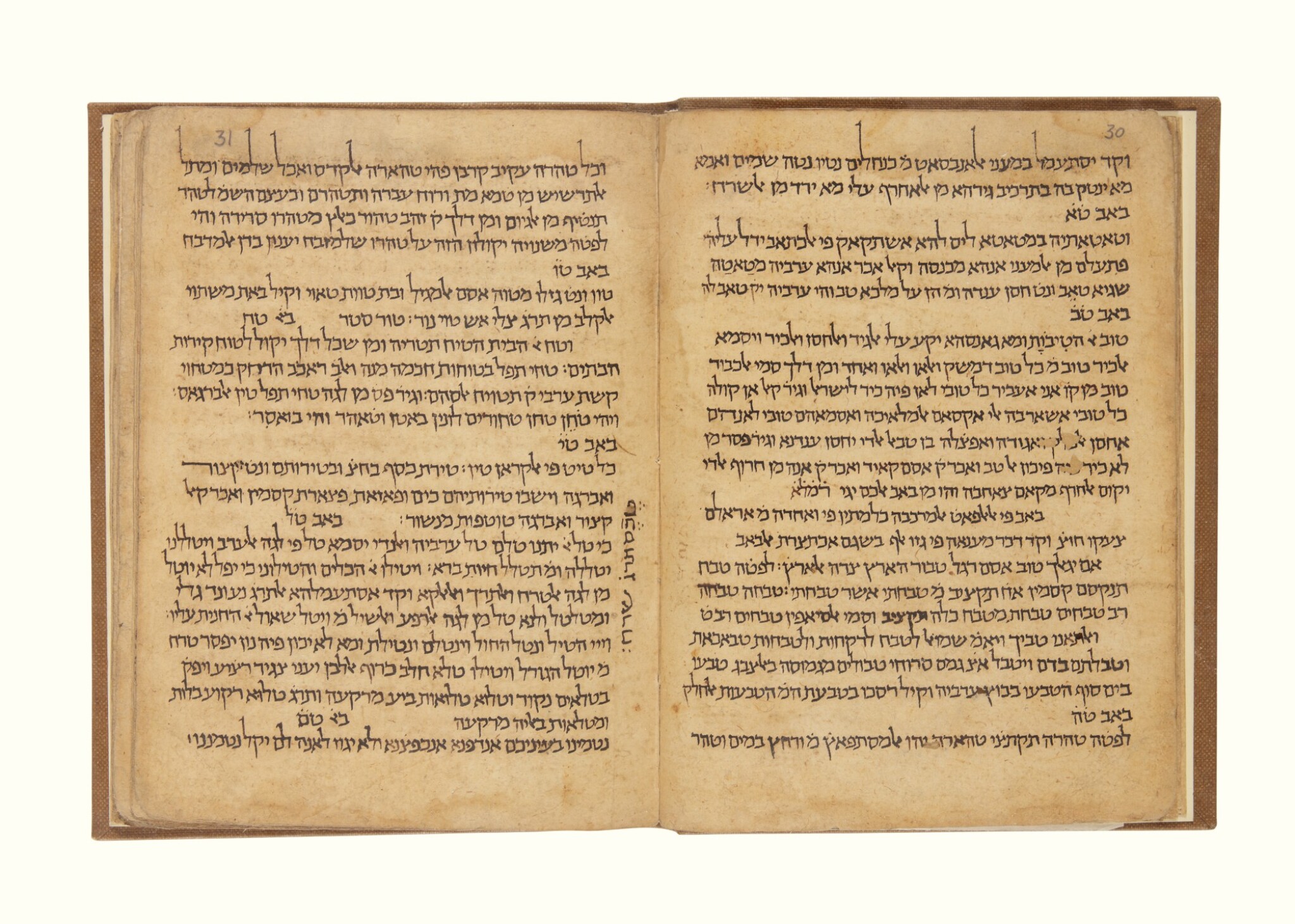 One of only four known substantial copies of an important early, unpublished biblical lexicon, and the only one in private hands.

As interest in the study of the Hebrew Bible grew in the aftermath of the Muslim conquests and the compilation of the first masoretic treatises, the related fields of Hebrew linguistics, grammar, and lexicography began to flower. The first comprehensive dictionary of Biblical Hebrew and Aramaic extant, entitled Kitāb jāmi‘ al-alfāẓ (The Book of the Collection of Words), was compiled by David ben Abraham Alfasi probably in the second half of the tenth century in Jerusalem. One of the earliest and most important sources for the investigation of the history of Hebrew philology, it has survived in both a long and a short version, the latter apparently created by the author himself. Alfasi arranged his dictionary, divided into twenty-two chapters (one for each letter of the Hebrew alphabet), according to the principle of biliteral (two-letter) roots. He had recourse to the ancient Targumim, Mishnah, Talmud, and the prayer book and often drew parallels between Hebrew (both biblical and mishnaic), Aramaic, and Arabic.

Alfasi’s lexicon achieved widespread popularity in the centuries following its publication. Because of its expansiveness, the longer version was condensed by Levi ben Japheth, and Levi’s abridgment was in turn epitomized by two other Jerusalem scholars, Ali ben Israel (mid-eleventh century) and Ali ben Suleiman (eleventh-twelfth centuries), apparently working independently of one another. Ali ben Israel’s text follows Levi ben Japheth’s compendium very closely, at times verbatim. However, Levi, and Alfasi before him, belonged to the medieval Karaite sect, which maintained traditions about biblical interpretation and Jewish law distinct from those of the mainstream, Talmud-abiding Rabbanite community. Accordingly, some of the exegetical comments in their dictionaries reflected their sectarian backgrounds. Ali ben Israel, by contrast, was a Rabbanite Jew; his abridged lexicon, therefore, omitted distinctively Karaite passages, perhaps in order to render the text acceptable for use in the instruction of Rabbanite students.

The present lot is one of only four significant fragments of Ali ben Israel’s epitomized version of Levi’s compendium to have come down to us. It is also the only known exemplar of this lexicon to bear a date (1066, though it is not clear whether this is the date of the work’s composition or the date of its copying), to name its author (though the attribution was added by a later hand), and to still be owned privately. Its historical value is therefore substantial. Indeed, in the words of a great twentieth-century scholar of Judeo-Arabic, “That a thorough and comparative study of all three compendia [those of Levi ben Japhet, Ali ben Israel, and Ali ben Suleiman] would be of great importance for the history of Hebrew philology need hardly be mentioned.”

Sotheby’s is grateful to Zvi Erenyi for providing information that aided in the cataloging of this manuscript.