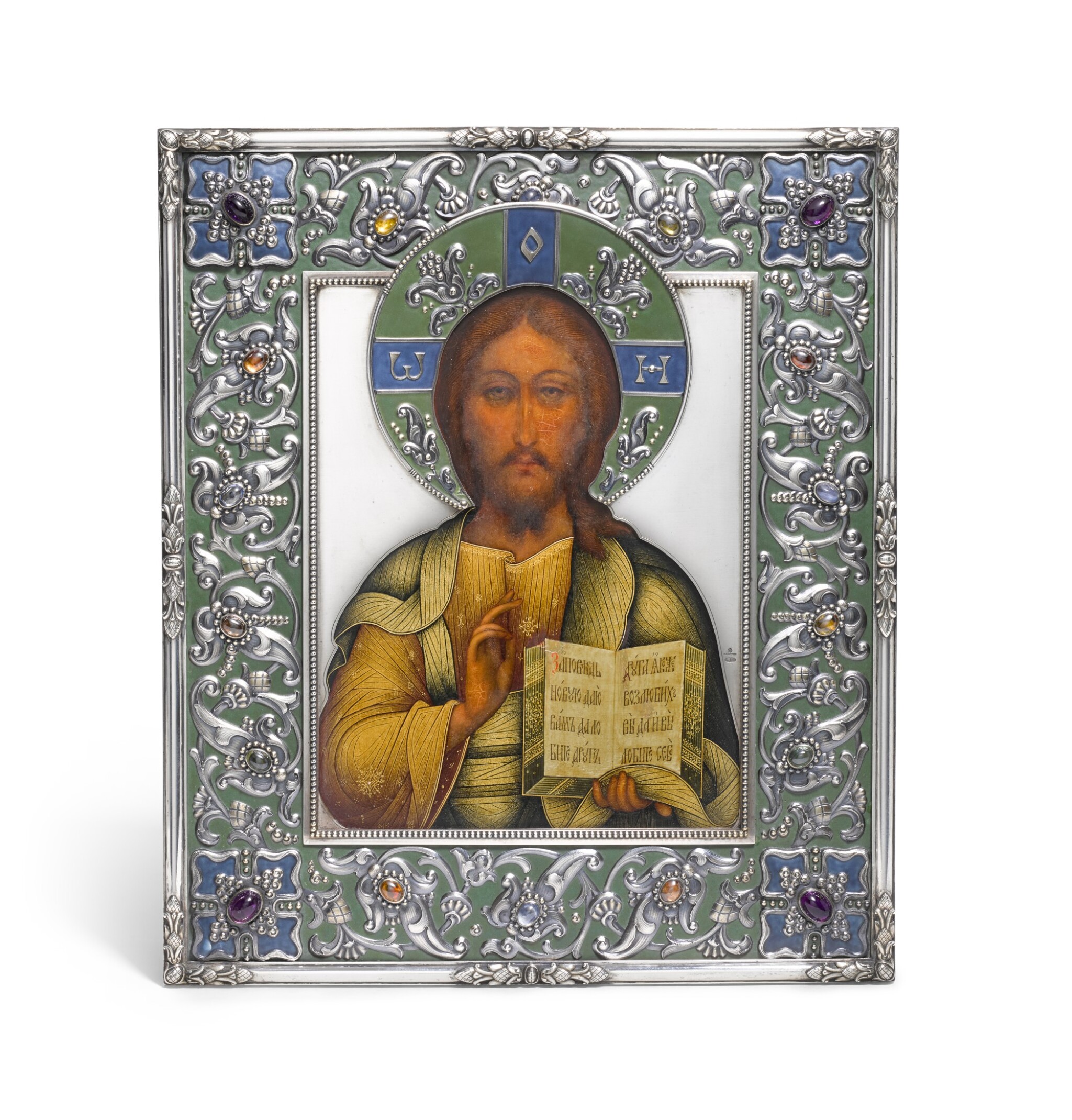 the oklad repoussé and chased in Art Nouveau style, enamelled in opaque olive green and steel blue, the foliate motif set with various cabochon gems, including amethyst, moonstone, topaz and peridot, the border inscribed 'To our brother Nikon Alexandrovitch Molchanov / and his wife Maria Alexandrovna as a memento from / sisters and brothers / 28 April 1916'; struck on the lower edge with Fabergé K.Fabergé in Cyrillic under the Imperial warrant, 88 standard, scratched inventory number 17810; accompanied with original calling card inscribed 'Nikon Alexandrovitch Molchanov / N A Molchanov / The Icon of the Saviour (a present from the sisters and brothers) [we are] giving to our daughter Lydia Nikonov / Kuznetsova 1934, March 23, Harbin / M. and N. Molchanov'

In very good condition overall. With only very minor loss to enamel, including a small area on the halo measuring 1mm. The surface with minor wear, consistent with age.

Presented to Nikon Alexandrovitch Molchanov (1871-1945) and his wife Maria Alexandrovna Lushnikova by Nikon's brothers and sisters on 28 April 1916.

Listed in the Imperial Cabinet Record of items for presentation by Emperor Nicholas II to the King and Queen of Montenegro on the 50th Anniversary of the King's rule and their Golden Wedding Anniversary in 1910, as number six under icons for possible presentation: 'The Saviour / Fabergé no. 17810' costing 500 roubles.

This icon was originally listed in the Imperial Cabinet Record of items for presentation by Emperor Nicholas II to the King and Queen of Montenegro on the occasion of the 50th Anniversary of the King's rule and their Golden Wedding Anniversary in August of 1910. Items to be presented from the Imperial Cabinet of Emperor Nicholas II included a Field Marshall’s baton, a nephrite kovsh and a jewelled icon.

The present icon was included in the list of icons for possible presentation as number six: 'The Saviour / Fabergé no. 17810' costing 500 roubles. Number seven on the list appears to be the pair to the present icon with sequential scratched inventory number 17811: ‘Mother of God / Fabergé no. 17811’ also costing 500 roubles. It is likely that the high cost of the pair precluded their presentation and another icon from the list was given to the King and Queen of Montenegro in 1910. The icon was presumably held in Fabergé’s stock until 1916, when it was acquired by the family of Nikon Alexandrovitch Molchanov.

Nikon Molchanov (1871-1945) was a key figure in the Russian tea and sugar trade for almost fifty years. Nikon took over his family business trading tea when he turned eighteen, in the same year he married Maria Alexandrovna Lushnikova. He was a co-owner of the Tomsk firm Sobinnikov & Brothers Molchanovs, founded in 1890. Molchanov was a very successful business man and landowner, with houses in Paris, Baden Baden and a summer house on the bank of the river Tom. He also undertook many philanthropic causes. He was on the Tomsk committee to give aid to refugees, sponsored various women’s educational institutions and primary schools. He was also a generous supporter of the church and cultural intuitions throughout the city (G. Zherebtzov, Merchants Kandinsky and their Descendants, 2012, pp. 99-105).

The present Fabergé icon was given to Nikon Alexandrovitch Molchanov and his wife Maria Alexandrovna Lushnikova by Nikon's brothers and sisters on 28 April 1916. Maria Lushnikova was also from a prominent family and was the second cousin of Wassily Kandinsky, with whom she shared her maternal great-grandfather. Like many white Russian émigrés, the Molchanov family moved to Harbin following the Revolution in 1917. In 1934, Nikon gifted this Fabergé icon to his daughter Lydia, who cared for him as he aged, eventually dying in 1945. Lydia took the icon with her when she immigrated from China to Canada and finally to the United States, where she settled much later in life. Lydia did not have children of her own, but the icon passed to subsequent generations, remaining in the family from whose collection it is now presented.