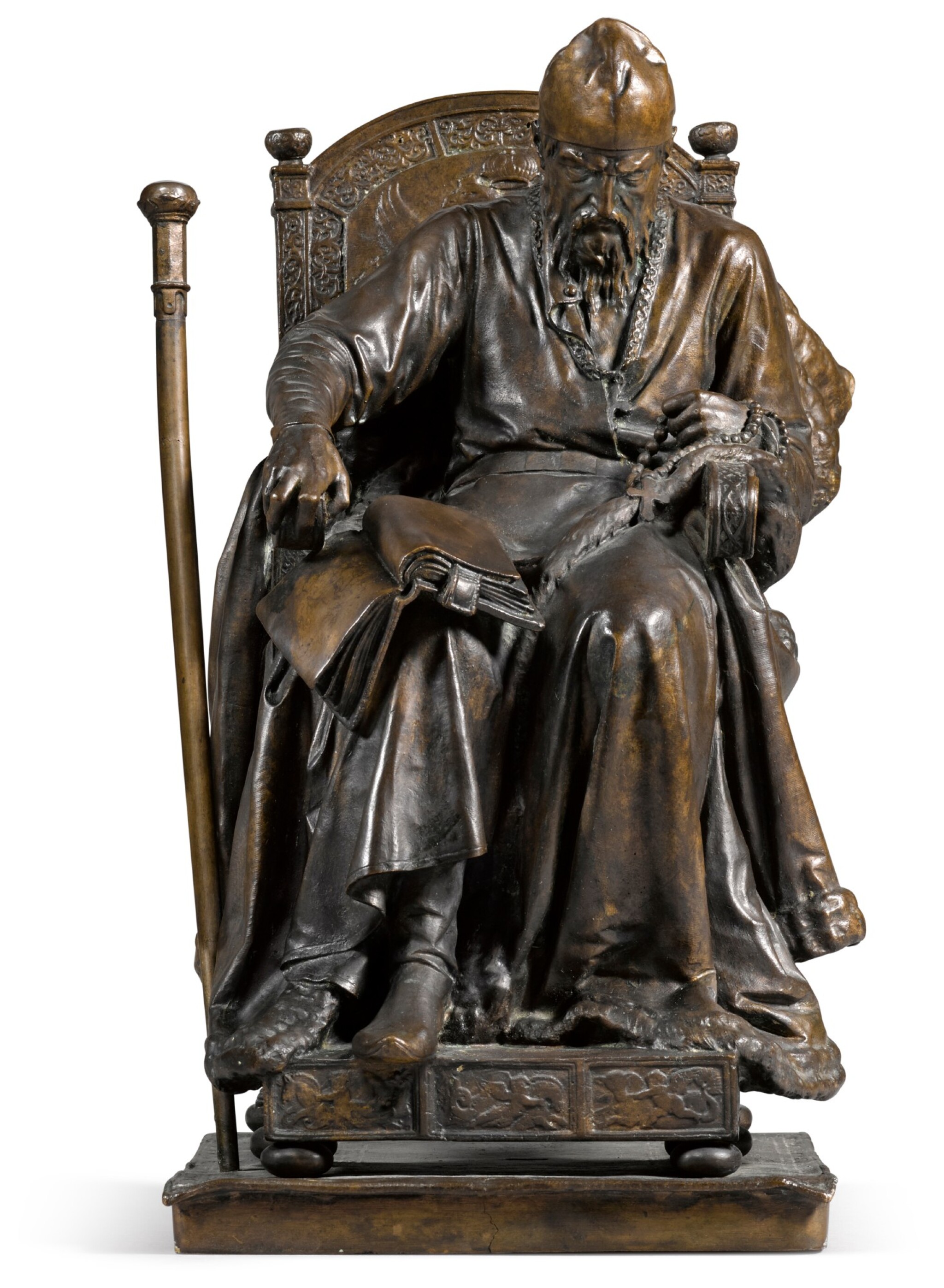 bronze, dark brown original aged patina, seated on a throne closely emulating the details of the original one in the Moscow Kremlin Museum, apparently unmarked

Having started his career depicting simple scenes from the lives of Jewish communities, Antokolsky later took on very ambitious projects portraying key historical figures. The original sculpture of Ivan the Terrible was a groundbreaking moment for the artist.

Unveiled at the St Petersburg Academy of Fine Arts in 1871, it was purchased by Emperor Alexander II for the Hermitage Collection (now in the State Russian Museum, St Petersburg). The sculptor was awarded a gold medal and an academic title. Recognition from members of the Imperial family made him – in his own words – 'wake up rich and famous, having fallen asleep poor and unknown'. The feared art critic Stasov named this work a masterpiece in his essays, while Turgenev wrote articles praising the artist:

‘In terms of the strength of the design, the skill and the beauty of execution, the deep understanding of the historical meaning and the very soul of the character chosen by the artist – this sculpture is definitely superior to anything of this kind, that has ever appeared in our country until now.’

Antokolsky’s works are marked primarily by his commitment to depicting human emotions, fears and feelings in a realistic manner. Although this was not initially popular with Russian audiences, it very quickly brought him international fame, making him the first Russian sculptor to become famous outside Russia. Very soon after his introduction to Parisian and therefore international art circles, his works began to be commissioned by European high society. Clients in Europe and Russia commissioned smaller casts of his larger famous sculptures such as the present bronze, since they were more appropriate for domestic interiors.

The Russian-Jewish sculptor Mark Matveyevich Antokolsky (1845-1902) was born in Vilnius, and studied at the Academy of Fine Arts in St Petersburg. After living in Berlin for a period, he emigrated to Paris in 1881. Antokolsky exhibited at the Universal Exhibition of Paris in 1878 to international acclaim, receiving the gold medal – the first prize in sculpture – as well as the Légion d’Honneur.