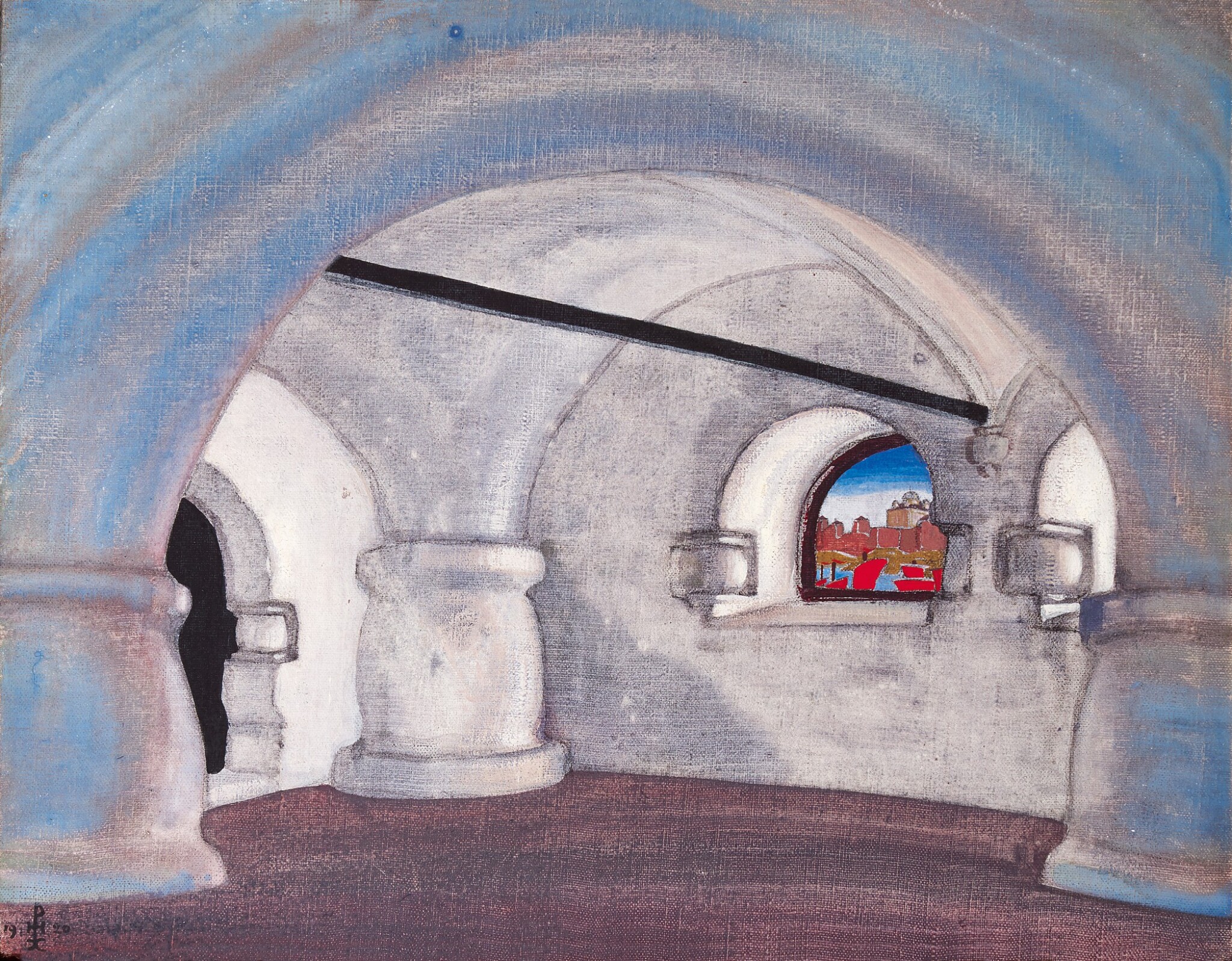 signed with the artist's monogram and dated 1920 l.l.; further bearing a Goupil Gallery label on the stretcher

Original canvas. The stretcher is protruding very slightly in the top right corner and the bottom right corner of the canvas is buckling slightly. There are a few scattered areas of very fine craquelure to the white pigment, which is slightly raised in places, most notably a small area to the right of the door. Some faint surface scratches are visible in the foreground, and there are a few scattered spots of mould. Inspection under UV light reveals no obvious signs of retouching. Strips of gold-painted wood are attached to the tacking edges. Framed and glazed.

The sheer number of theatre designs by the great Russian artist Nikolai Roerich found in both museum and private collections and offered at auction internationally is proof alone of their continued relevancy and appeal to a modern audience. His set designs for dramatic, opera and ballet productions between 1907-1944 arouse the same undimmed art-historical interest. Most notably those for Polovtsian Dances and the ballet The Rite of Spring (which so stunned European audiences of Sergei Diaghilev’s Ballets Russes) were a seamless blend of the musical and theatrical imagery of East and West, Ancient Rus and prehistoric Slavdom. The resurrection in the 1980s of the original dazzling production of Igor Stravinsky’s ballet The Rite of Spring (1913) with choreography by Vaslav Nijinsky and designs by Roerich has captivated new generations of Russian, European and American audiences.

Just this year, in February, art historians and art lovers were reminded of Roerich’s talent as an artist of the stage. The Moscow opera director Dmitri Tcherniakov took Roerich’s designs for the celebrated Russian opera and epic poem Sadko as the basis for the staging of Act III of a new production of Rimsky-Korsakov’s opera at the Bolshoi Theatre. The director presented each of the five acts with designs by different artists – Roerich, Konstantin Korovin, Apollinari Vasnetsov, Ivan Bilibin and Vladimir Egorov – each of whom had produced designs for the production at various opera houses in Russia between the 1900s and 1920s.

The present design, variously titled Sadko’s Palace, Sadko’s Chamber and Chamber in Sadko’s Palace, is one of four the artist made for the opera in London in 1920. He had visited the English capital the previous summer at the invitation of Sir Thomas Beecham, the famous director and impresario, and Sergei Diaghilev, organiser of the Ballets Russes, with a view to staging a production of Russian opera classics at Covent Garden. By the beginning of 1920 Roerich had already created set and costume designs for The Tale of Tsar Saltan and Snegurochka by Rimsky-Korsakov, Prince Igor by Alexander Borodin and Khovanshchina by Modest Mussorgsky. In the first few months of the year he was already working on designs for both Sadko and the ballet The Rite of Spring with choreography by Léonide Massine. Beecham’s bankruptcy unfortunately put paid to the realisation of The Tale of Tsar Saltan, Khovanshchina and Sadko: ‘But I had so wanted to’ Roerich later wrote of the shelved designs for Sadko ‘Sadko’s chambers, the Novgorod pier, the boats – I knew it all so well. Now the designs have been dispersed and will never be brought together again.’ (N.Roerich Vstrechi // N.Roerich Listy dnevnika, Vol.1, p.194).

The designs were indeed dispersed among different collections and only one of these has been widely published and is therefore widely known: that which was originally in the collection of Adolph Lewisohn of New York, from the 1930s in the collection of Emily and Richard Stearns of Massachusetts and was then sold in a London saleroom in 2016. It was this version (known as A Chamber in Sadko’s Palace, tempera on canvas, 50 by 76.5cm) that Tcherniakov used for the staging of Act III in the recent Moscow production where, instead of the highly-decorated backdrop that has been used for the last century, a complex three-dimensional construction of monumental forms now appeared.

However we know that Roerich created three versions of this design. The second is close to the first not only in terms of size and technique (50.8 by 76.2cm) but also in terms of composition which corresponds to the libretto of Act III in which the action takes place early in the morning in Sadko’s chamber and Lyubava Buslaevna, the young wife of the Novgorod musician, stands by the window waiting for her husband. This second version belongs today to a private American collection.

The third but also the original design which initiated the artist’s work on the scenography of Act III is that which is presented here for sale. The thematic, compositional and stylistic features of this version all provide convincing evidence of its place in the chronology. Dreaming up a suitable location for the action which is to unfold, the artist decides on an ascetic setting typical of an ancient Novgorod merchant’s house, but whose empty chambers will brim over with emotion and ring out with the famous aria of Lyubava.

On the stretcher of the present lot an old exhibition label has been preserved which relates to an exhibition of the artist’s work at the Goupil Gallery in London and corresponds with an entry in the catalogue. The work was acquired from the gallery by the grandfather of the present owner and has been in the family ever since. The exhibition, which Roerich called Spells of Russia, ran from April to June of 1920 and was a major cultural event in London and a great success according to contemporary reviews. Filling four rooms in the two-storied gallery, the show numbered some 98 paintings and theatrical designs from various periods of the artist’s career. It featured heavily in the columns of art-critics who did not hold back in their praise of the talent of this Russian artist.

We are grateful to Dr Elena Panteleevna Yakovleva for providing this catalogue note.