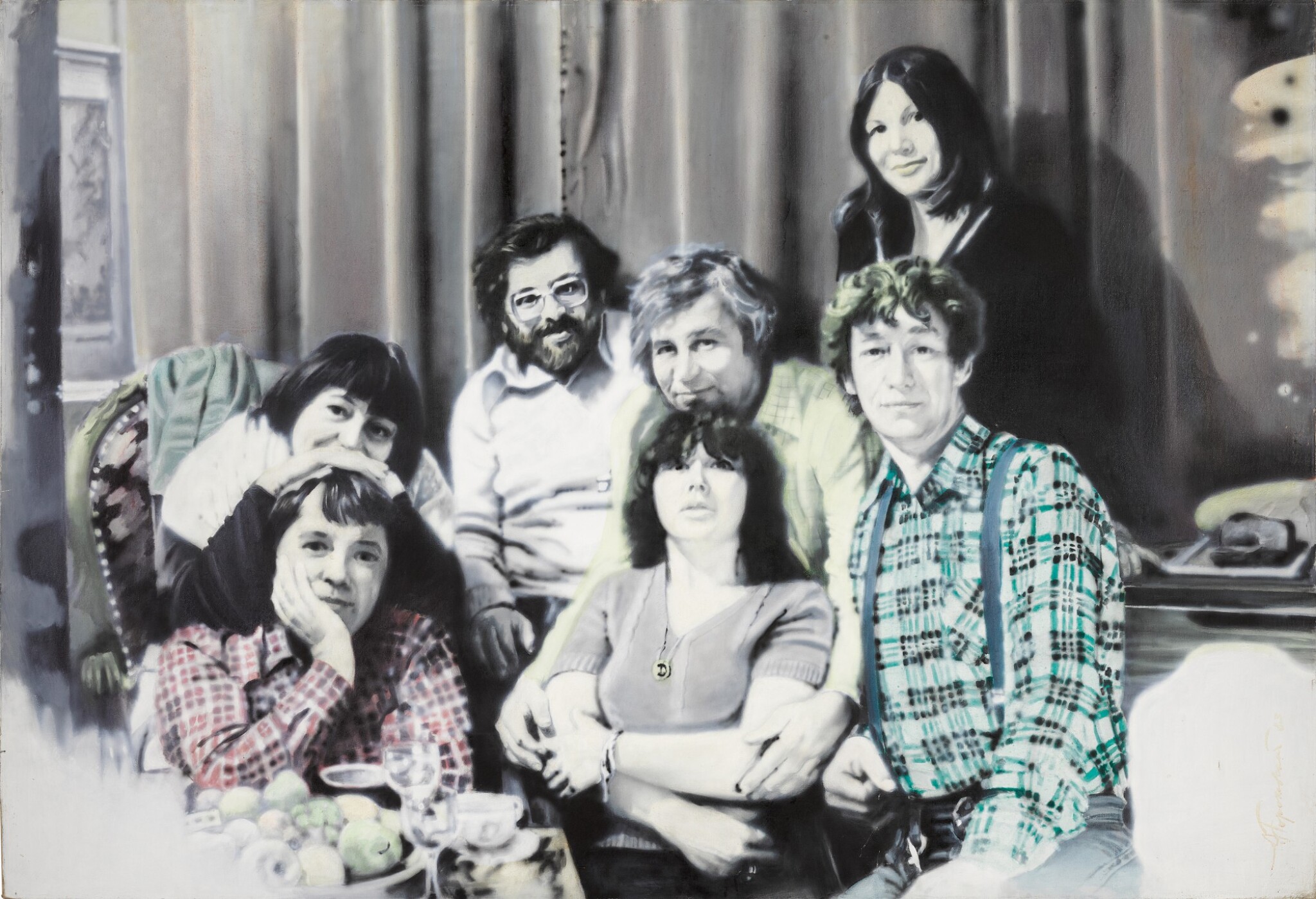 GROUP PORTRAIT IN AN INTERIOR

signed in Cyrillic and dated 83 l.r.; further signed, titled, inscribed and dated on the reverse

Original canvas, which is attached to a stretcher which has warped. There is a small canvas patch securing a very small repaired tear in the lower left corner as viewed from the reverse. This corresponds to a thin line of paint loss to the white area with the signature. There is a small hole to the canvas in the very top right corner. There are a few punctures, scuff marks and surface scratches with some minor losses to the centre of the right edge, a few scratches below Chuikov's right hand, a scratch to the centre of the left edge, as well as some faint scratches elsewhere. The surface is covered in an uneven layer of varnish which has discoloured. There is a layer of surface dirt with a few stains in places, most notably to the white areas in the two lower corners. Inspection under UV light does not reveal any obvious signs of retouching. Unframed.

Group Portrait in an Interior is an intimate portrait of a tightly-knit group of friends and key figures among the Moscow Non-conformists. It depicts from top left to right: Nina Gorokhovskaya, Garik Basmadjian, Ilya Kabakov and Galina Chuikova, and from bottom left to right, Viktor Pivovarov, Viktoria Mochalova and Ivan Chuikov.

As one of the pioneers of Soviet photo-based art, the photographic portrait is central to Gorokhovsky’s painting, both in terms of technique and subject. He made use of silk-screen prints, serial images and painted copies of photographs as a way of exploring layers of reality and identity. He also took historical photographic portraits as his subject as a way of poignantly documenting individuals and dignifying their individual lived experiences. providing a contrast with the mass-reproduced images of idealised non-people and their leaders of state propaganda.

The portrait in this catalogue is explicitly not painted from life but is a painting of a photographic portrait, thereby adding an additional layer between the viewer and the subject. The distance is not just physical but temporal too, it has the appearance of a hand-coloured black and white print, bleached by sunlight over many years, historicising the sitters. This is not portraiture as revelation, as a window on to the souls of the sitters, but portraiture as myth-making – a quality and intention it shares with the imagery of state propaganda.

The interior setting is itself as significant as the sitters for the Moscow apartment was the specific milieu of the Soviet intelligentsia. The Moscow apartment interior was to the Non-conformists what the café was to the Vienna Secession. It was a safe, if claustrophobic, space to share ideas and hold artistic debates and, after the Bulldozer exhibition of 1974 apartment exhibitions were the only way they could show their work. In the conceptual installations of Ilya Kabakov the kommunalka became his theatrical stage set and would be elevated to the status of metaphor for the Soviet Union.