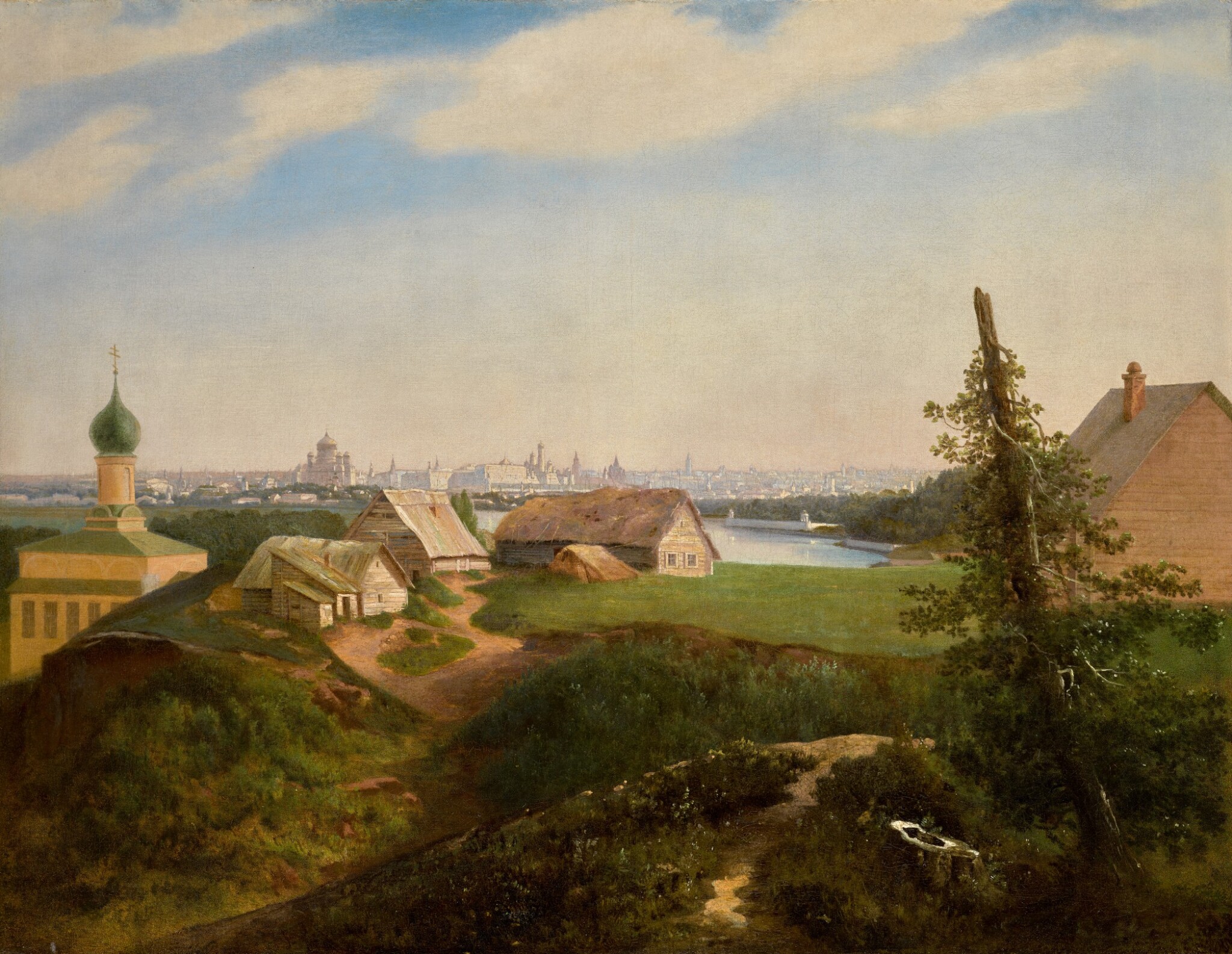 bearing a Prague exhibition label on the stretcher

The canvas has been lined and put onto a new stretcher. There are minor losses to the original canvas along the edges and to the corners. Faint stretcher bar marks are visible in places. There is craquelure throughout. Inspection under UV light reveals retouching to the sky, to the foreground, to the tree and house on the right, to the house and church on the left, to the aforementioned stretcher bar marks, along the edges, as well as further scattered retouching throughout. Framed.

Collection of Jaroslav Koutský, diplomat to the Soviet Union between 1920-1930, Prague

View of Moscow was the only work by Savrasov included in the 1935 exhibition of Russian art in Prague. The painting is documented in photographs taken of the exhibition (fig.1-2) and is recorded in the catalogue where it is listed as belonging to a private Prague collector with the initials J.K. — Jaroslav Koutský who served as a diplomat to the Soviet Union between 1920 and 1930. Vladimir Fiala later reproduced the work in his 1956 article on unknown views of Petrograd and Moscow and referenced it in his 1974 book on Russian art in private collections in Czechoslovakia. The famous art historian described the painting as follows: ‘The foreground consists of an uneven wasteland with a damaged tree and a rotten stump in the right corner. All the middle ground is occupied by village huts, and on the left-hand side there is a little church with a single onion dome. Further behind the bend of the Moskva River opens the view towards the city with the Kremlin and the Cathedral of Christ the Saviour clearly visible.’

Depicted from an elevated viewpoint on the right bank of the Moskva in the surroundings of Andreevsky monastery, the present composition poetically juxtaposes the architectural panorama of the capital with the austere untouched beauty of the Russian countryside. Vast green terraces stretching along the river on the right side of the composition depict the historical Neskuchny garden and Golitsyn Hospital park. The white granite wall, also known as Golitsyn Wall, with elegant rotundas at its ends was designed by the famous neoclassical architect Matvey Kazakov and marked the limits of the hospital garden along the embankment.

Landscapes of Moscow and its surroundings occupy a special place in Savrasov’s work. As a native Muscovite, a pupil and later professor of the Moscow School of Painting and Sculpture, Savrasov revisited the subject of the city on multiple occasions. His early compositions such as View of the Kremlin in Inclement Weather (1851, State Tretyakov Gallery, fig.3) or later works like View of the Moscow Kremlin, Spring (1873, State Russian Museum, fig.4) are among the finest examples of the Moscow landscape school.