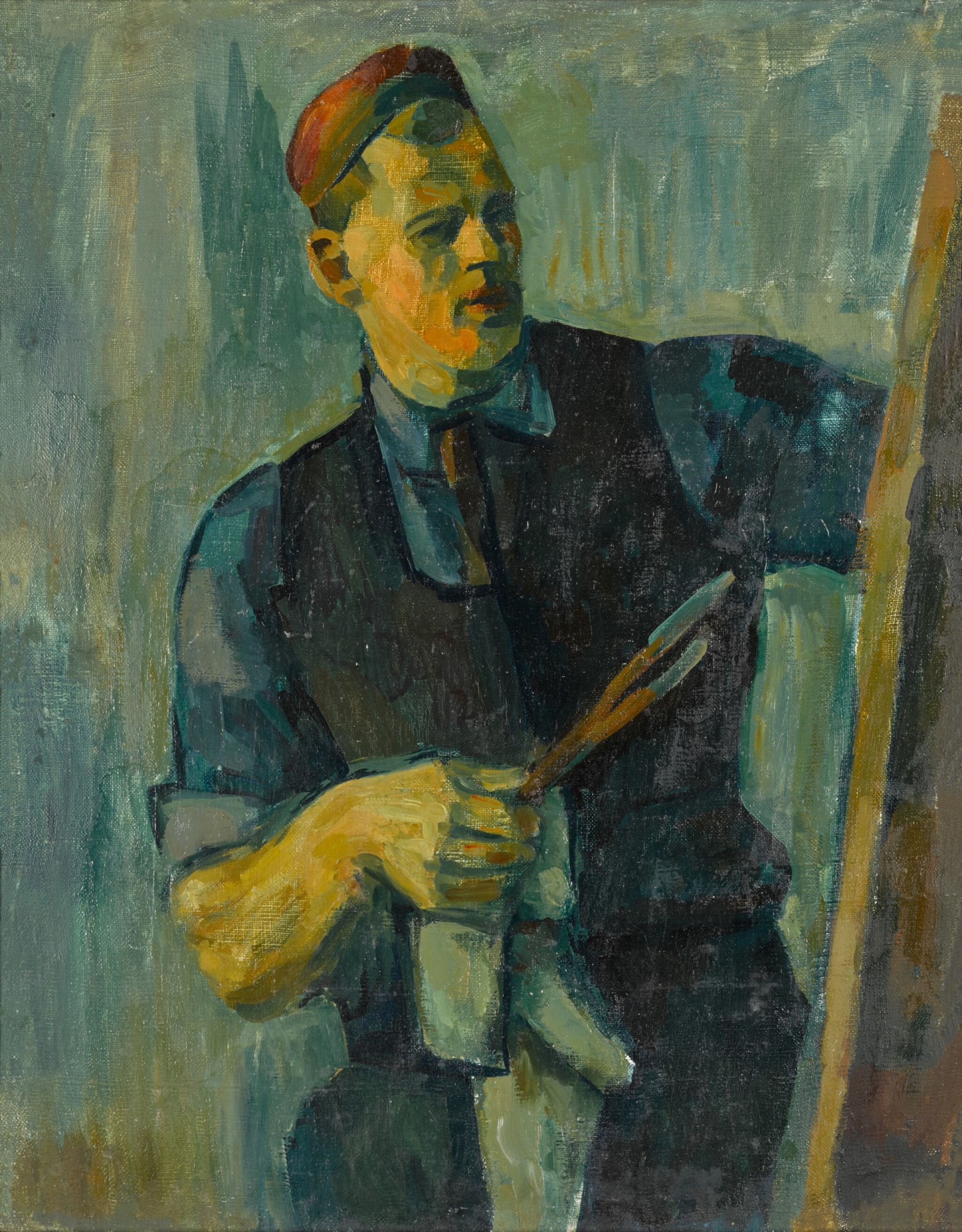 signed and titled in Cyrillic and dated 1928 on the reverse

Original canvas which is very slightly buckling in the upper left and lower right corners. There are a few scattered flecks of paint loss: in the upper left of the composition and in the green of the cloth around the brushes. Several areas of retouching are visible to the naked eye, particularly in the lower part of the composition. There is an uneven varnish layer. Inspection under UV reveals retouching to the edges and all four corners. Framed.

Condition 9 of the Conditions of Business for Buyers (Studio Sale) is not applicable to this lot.

Sopot, State Gallery of Art, Russian Avant-Garde from the Collection of the Jerlitsyns and Zarskaja, 6 June - 23 September 2012

﻿I first met Konstantin Ivanovich in 1967, the year we celebrated the 50th anniversary of the October Revolution. As part of the celebrations a huge fifteen-day festival took place in Moscow, during which each of the fifteen Republics demonstrated its achievement in the arts. The exhibitions took place at the Manezh in the very centre of Moscow, and each day of the Moscow festival was dedicated to a Republic. Over the following four years, all of the exhibits were taken on a tour of the country and were shown at 128 of the Soviet Union’s museums.

In early November I was sent to Moscow by the Novokuznetsk Art Museum, where I worked as a Senior Researcher, one of my tasks being the acquisition of works for the museum. I stayed at the Hotel Moskva. Before the opening of the festival, attended by representatives of the Ministry of Culture, artists and art historians among others, at 6pm, I decided I would use the day to see the exhibition of Fedor Bogorodsky at 11 Kuznetsky Most. I was lucky enough to be able to join a tour led by the artist’s widow Sofia Vasilievna, whom I knew from her wonderful books on the artist. At the time she was one of the country’s leading art historians who had published 60 books, and every artist dreamt that she would write about them.

After the tour I walked up to Sofia Vasilievna to introduce myself. She suggested we go and visit the Bubnov exhibition at 20 Kuznetsky Most, where Ksenia Stepanovna Kravchenko, the art historian and wife of Alexei, was waiting for her, and then the three of us would go to the Manezh. I was delighted to meet Ksenia Stepanovna, I knew her work well. I vividly remember this November day, the streets were very slippery and I was leading the two women – I was 35 and they very both nearly 70 – and telling them about my work at the museum and about our many exhibitions. We arrived at the Manezh and once seated; Sofia Vasilievna laid her hand on the shoulder of a broadly-built man seated in the row in front of us. He turned around, greeting both women, who introduced me to him: ‘Konstantin Ivanovich, this is a young employee of a museum in Siberia, they are doing great work there, would you please help them.’ He looked at me with a friendly smile and said: ‘Of course, come and see me at the Union of Artists tomorrow morning at 10.’ The show started, but all I could think was that I had just met Rozhdestvensky, whom they called Malevich’s last student! And I was sitting next to him! Then, in the late 1960s, hardly anyone knew of Malevich but luckily things weren’t as strict in Siberia, far away from Moscow, and our museum was a little island for the free-thinking intelligentsia. We read samizdat copies of Solzhenitsyn, and I was already in discussion with Yakov Rubinstein about a possible exhibition of his collection. I was so happy on that November evening of 1967 to meet and talk with these people.

The next day I arrived at the building of the Union of Artists, and I was received by Konstantin Ivanovich. He was very friendly and warm, and only later would I learn that he too was born in Siberia. From 1963 to 1988 he was Secretary of the Union of Artists of the Soviet Union, a hugely influential post, since he was responsible for all exhibitions and the vast holdings of the Union. At the end of our meeting he handed me a note and said: ‘Tomorrow go to 28 Bolshaya Polyanka, our storage, and choose anything you need for the museum.’

After we had parted I started thinking about my mission to choose works for the museum, and I realised I needed help. I called Tanya Segal from the Tretyakov Gallery, whom I had met when she brought works from the Tretyakov for an exhibition at our museum. The next day, Tanya and I chose 128 works for the Novokuznetsk Museum, including paintings by Grabar, Kuprin, Lentulov, Osmerkin, Kravchenko and others. Having accomplished my mission, I returned triumphant to Novokuznetsk.

Over the years I would occasionally meet Rozhdestvensky at events. I remember how highly Sofia Bogorodskaya and Ksenia Kravchenko thought of him, and they regretted that he had stopped painting in 1935. I think that after Malevich’s death, he did not want to work in the only style then possible: Socialist Realism. When I finally saw his works in his studio, I was shaken. Nothing of the sort had ever been shown in museums. Thus is was that I started to take interest in the avant-garde at a time when this was not at all a done thing.

Between 1985 and 1989 I acquired a group of paintings from Rozhdestvensky from the 1920s and 30s. In 1985, I bought several works from what one might call his female series: Seated Woman with a Jug (lot 113), Portrait of a Woman in Red (lot 110), Girl in a Red Beret (lot 111), which he said was one of his very last paintings. There were other works I liked and wanted, including his Self-Portrait [the present lot]. I told him that it showed him as a true Siberian, and that he resembled my uncles, my mother’s four brothers. He asked about them and promised to think about it, adding that it would please him to see his self-portrait go to Siberia. Later, I bought Boy in an Ushanka (lot 115), Boy with a String of Onions (lot 116), Grain Silo (lot 117) and, the one that made me most happy, his Self Portrait.