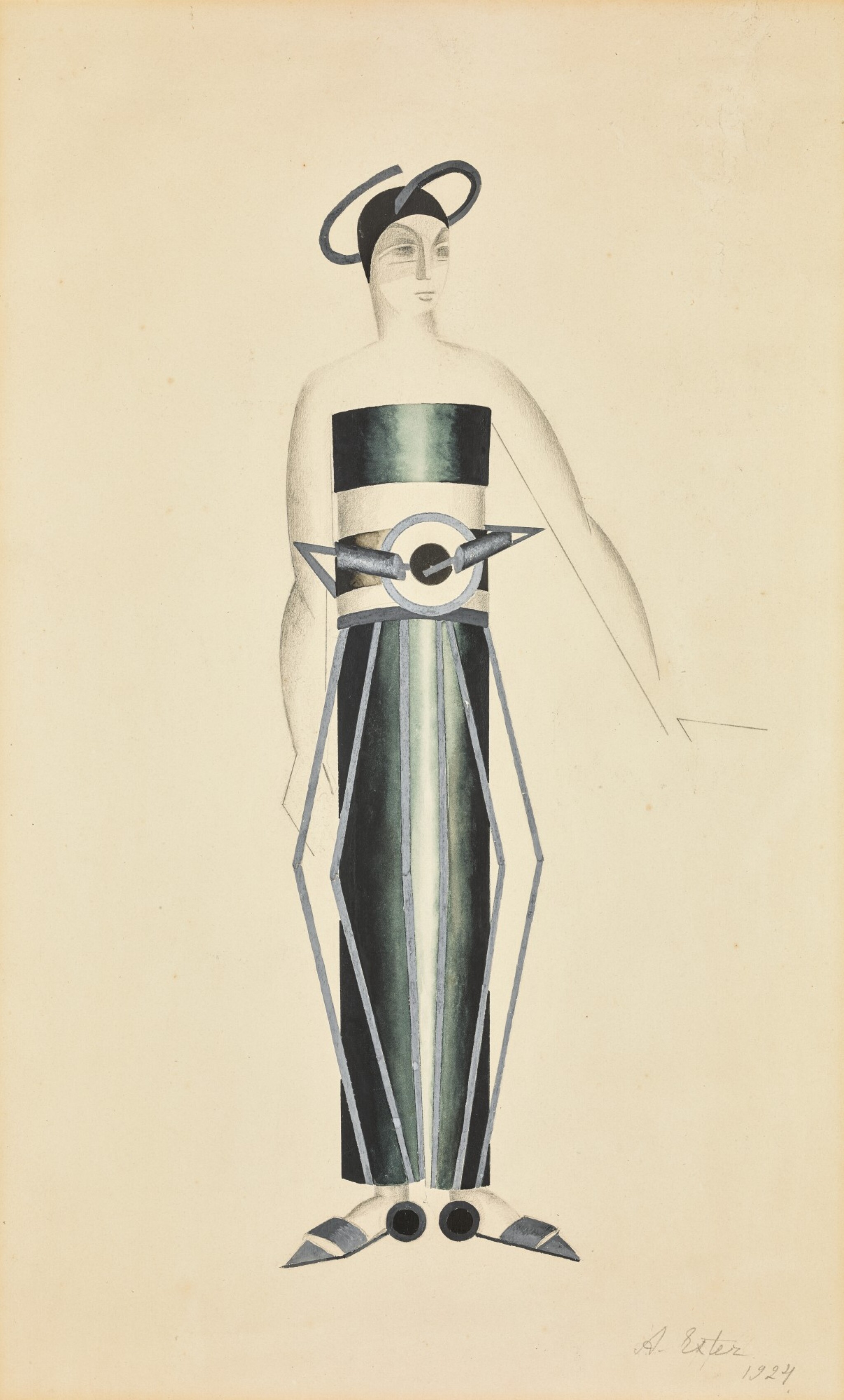 signed in Latin and dated 1924 l.r.; further bearing a label for the Committee for the Russian section at the 14th Venice Biennale and a Lissim collection stamp on the reverse of the backing board

pencil, ink and wash and gouache on paper laid on cardboard

The sheet has been laid down on cardboard. It has discoloured and there is mount staining at the edges. There is an area of skinning to the top layer of the paper in the upper right of the composition. A few media stains are visible in the areas of grey gouache and surface abrasions have led to a few scattered tiny flecks of paint loss. There is a layer of surface dirt with the odd spot of foxing. Framed and held behind plexiglass.

Condition 9 of the Conditions of Business for Buyers (Studio Sale) is not applicable to this lot.

Exter was at the centre of Russian artistic life in Paris before the outbreak of war forced her to lock up her studio and return to Russia. In 1924 the opportunity again arose to leave the country for the West when she was selected to represent the Soviet Union at the 14th Venice Biennale. Under this pretext she was then able to return to Paris at the Biennale's closing, taking with her the five paintings and 19 works on paper she had exhibited in the Soviet Pavilion including her celebrated designs for the 1924 film Aelita.

Aelita, directed by Yakov Protozanov and based on the eponymous short story by Alexei Tolstoy, is one of the first science-fiction films in cinema. Its futuristic Constructivist aesthetic had a huge influence on Fritz Lang's Metropolis and on the aesthetic of the science-fiction genre in general. Exter's ground-breaking set and costume designs sent ripples through the design and fashion worlds that were felt for years to come. In her costumes for the Martians she used metallic fabrics and plexiglass helmets and the sculptural forms spiralling around Aelita's servant's dress were actually metal springs that whirled around her as she moved.

The film's hero is Los, a Communist engineer who builds a rocket to Mars – the Red planet. There, he falls in love with the martian queen Aelita and helps her to lead a workers rebellion against the de facto leader Tuskub and the planet's Elders. This uprising is brutally put down by the Martian fascists and Aelita's mischievous servant girl Ikhoshka is killed.

Another version of this design is in the collection of the Bibliothèque nationale de France in Paris.