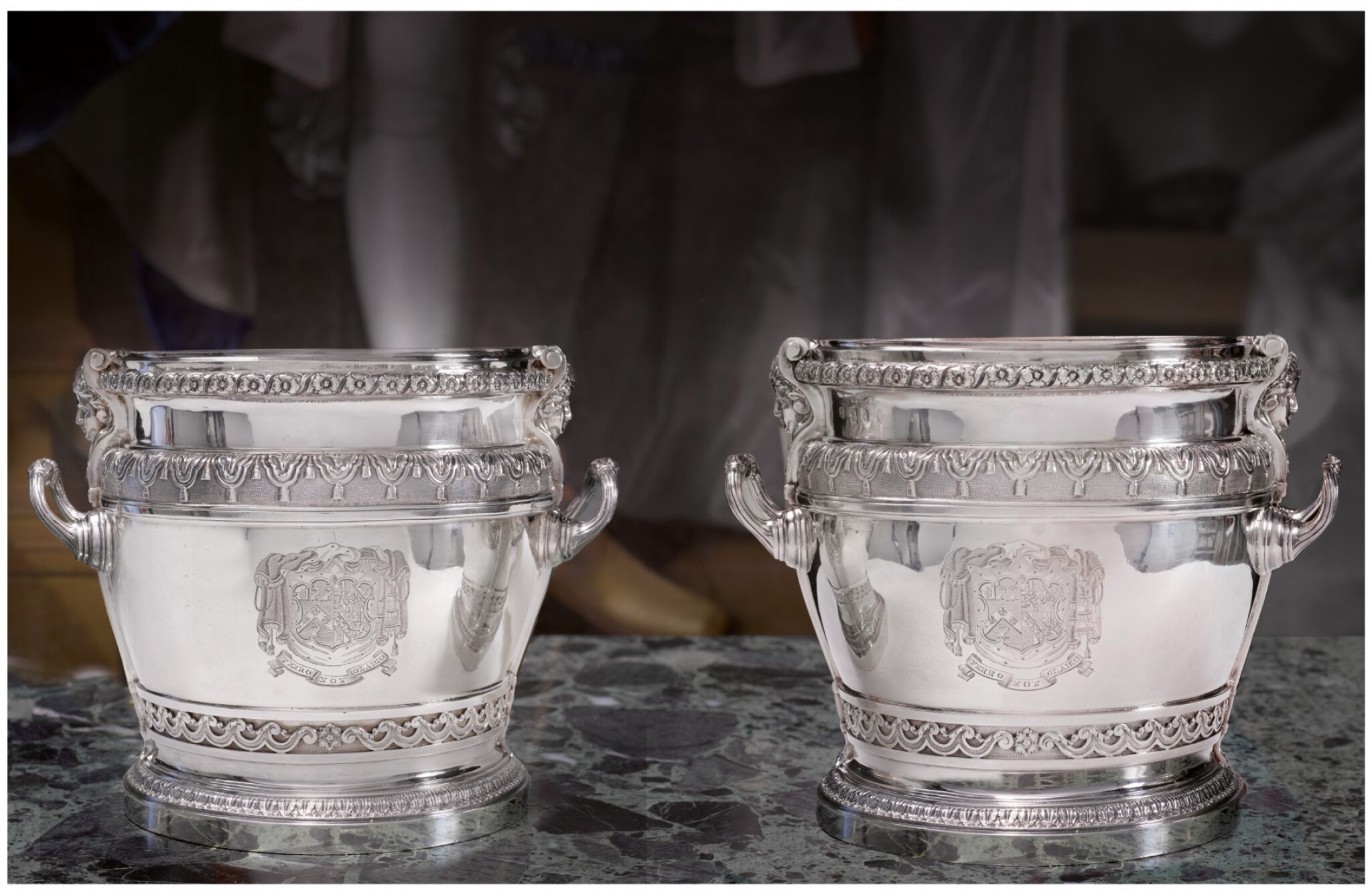 lightly bombé urn form, the base rims with leaf-tips, the bodies with Vitruvian scroll bands below shoulders decorated with tasseled lappets on matted grounds, rosette upper rims, the sides with female-headed terms with diaper shafts behind fluted handles, engraved on both sides with later arms on drapery mantle

marked at rims and engraved underneath with scratch weights

﻿﻿﻿﻿﻿ slight surface wear to high spots, ridge in lower interior suggests may have had liners

London, Christie's, The Glory of the Goldsmith, Magnificent Gold and Silver from the Al-Tajir Collection, 1989, no. 44.

These superb wine coolers belong among the very earliest examples of the form in English silver, but the design is sophisticated and fully developed, probably being derived from French prototypes by Ballin or De Launay. David Willaume had made a pair of wine coolers in silver-gilt for the Duke of Devonshire in 1698 that may be the earliest known examples of the formf. In 1701 two "ice paills" were part of the Ambassadorial plate issued to the Duke of Marlborough.

Slightly later examples include Willaume's pair of 1705 from the Fitzwilliam Collection, those made for Lord Strafford about 1710 (Sotheby's, New York, October 18, 2001, lot 123), and two pairs by Lewis Mettayer of 1713 for Speaker Hanmer and 1714 for Lord Methuen.

After Harrow and Trinity College, Cambridge, Bertie Guest married in 1868 Lady Cornelia Henrietta Maria Spencer-Churchill (1847-1927), daughter of John, 7th Duke of Marlborough, and thus was brother-in-law of the 8th Duke and Sir Randolph Churchill, and uncle by marriage)( of the 9th Duke and Sir Winston Churchill.

He served as High Sheriff of Glamorgan in 1862 and as mayor of Poole from 1896-1897. In 1880 he was named Baron Wimborne, of Canford Magna (Dorset) with the support of Disraeli's. He died in 1914 at Canford Manor, Dorset, now a school, and was succeeded by his son, later created Viscount Wimborne.