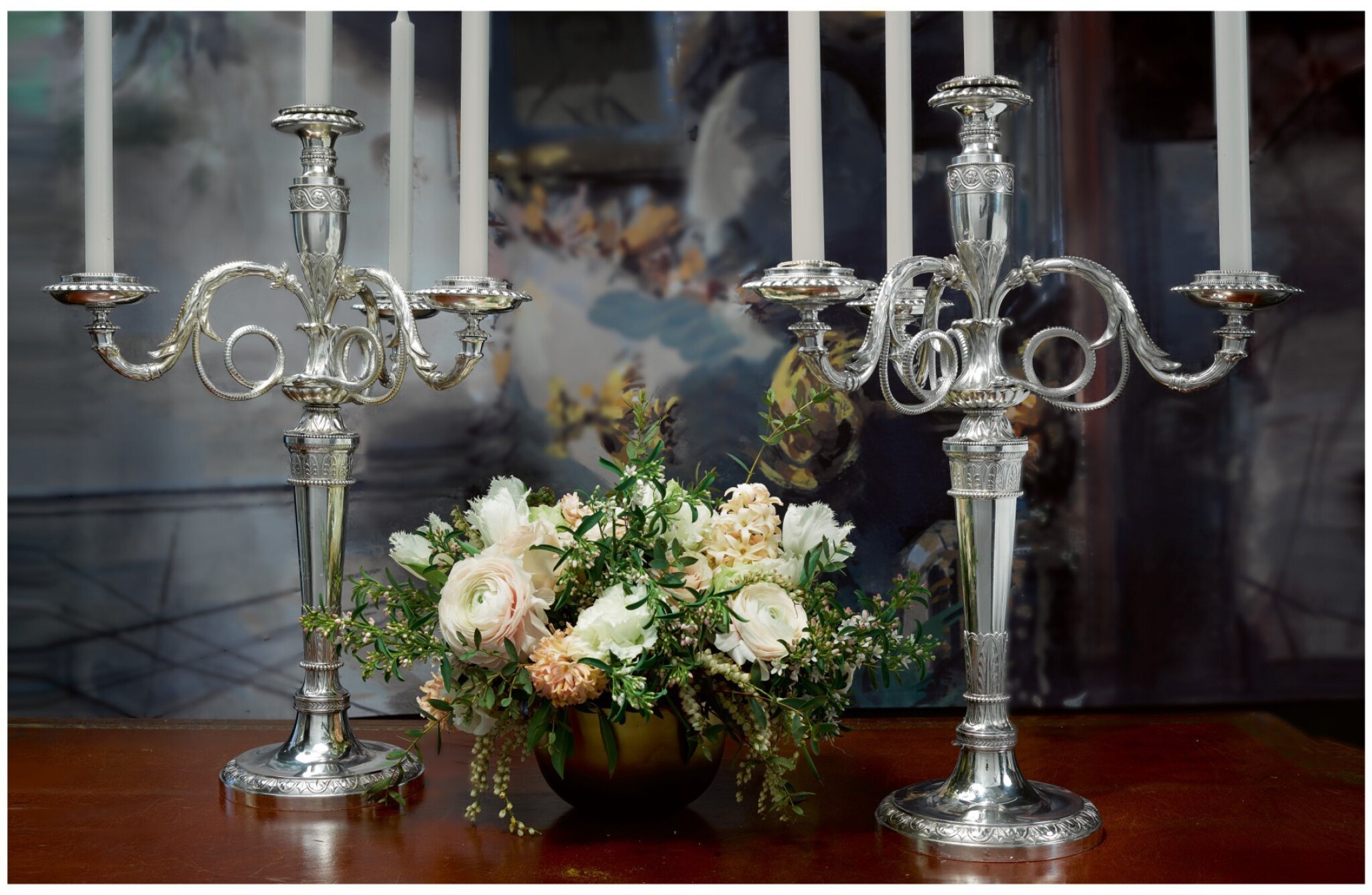 412 oz including base metal rods

as noted re: marks on nozzles, metal rods and nuts presumably replaced; one with minor repairs where stem meets gadroon base of top and to adjacent serpent, otherwise good, handsome model and crisp chasing

These candelabra reproduce a model designed by Jean-Guillaume Moitte and executed in Paris by Henry Auguste. The design, with variants such as optional chains and the arms terminating in either rosettes or simply loops of the snakes, is preserved at the Metropolitan Museum of Art. An early biographer noted that Moitte produced over 1000 drawings for Auguste, many of which were later acquired by the Odiot firm.

Henry Auguste was making candelabra using the variants of this model at least by 1789, the date of a pair of gilt examples formerly in the collection of Lily and Edmond Safra (see Sotheby's, New York, October 20, 2011, lot 835). These may have been made for William Beckford, who sold a pair of candelabra corresponding to this model in 1817. A large series of twelve, also marked for 1789, was delivered for the Duke of York, second son of George III (pairs in the Metropolitan Museum and the Fine Arts Museums of San Francisco).

Thus, examples of this French model were in England by the early 1790s, in the most avant-garde circles. The current version marked by Paul Storr, 1797-98, belongs to a group of French-style silver marked in London in the 1790s, and notable for being executed in Britannia standard. This standard had not been in usual use in England since the 1720s, but it does correspond to the silver standard in use in Paris for the finer work.

These French-style pieces in a French silver standard, marked in London during the French Revolution and early Consulat, are probably either the work of an emigré craftsman or exported from Paris, where the Terror had destroyed the luxury trades. There has been speculation that Auguste himself was working in London, given their basis on his models and his important group of existing English clients. To conform with English hallmarking laws, the pieces would have had to be sponsored by an accepted member of the London guild. Were Auguste in England, using the workshop of an English silversmith, one would expect all of the Britannia-standard wares to share the same English maker's mark.

However, several different makers appear on the Britannia pieces of 1796-98: Paul Storr on these candelabra and on one of a matching pair at Corpus Christi College, Cambridge, while the other is marked by retailer Francis Magniac (see Christopher Hartop, Art in Industry: The Silver of Paul Storr, fig. 31, p. 38). Storr also marked a set of four open sauce tureens of 1797-98. John Scofield marked a pair of Britannia standard wine coolers of 1796-97 with borders matching the Storr pieces, and Robert Sharp's mark appears on at least four sets of Britannia entree dishes, 1796-97. Christopher Hartop suggests that these pieces were imported from France, as either finished items or as components, and feels that the finish on several of them points to French production, rather than English copies.

The multiple silversmiths involved suggests a middleman who sold the French items to English makers, who each chose pieces appropriate for their respective clients. Many of the pieces have matching palmette borders: the candelabra, wine coolers, and sauce tureens. Entwined serpents link the candelabra and six of the entree dishes. These shared motifs suggest the items could have been all from one large service. It is easy to image an important service of plate, commissioned, designed and partly executed in Paris in the early 1790s, unable to be delivered or even marked after the Terror of 1793-94 and eventually being sent to the potential market of London, dispersed, and marked in its new country.