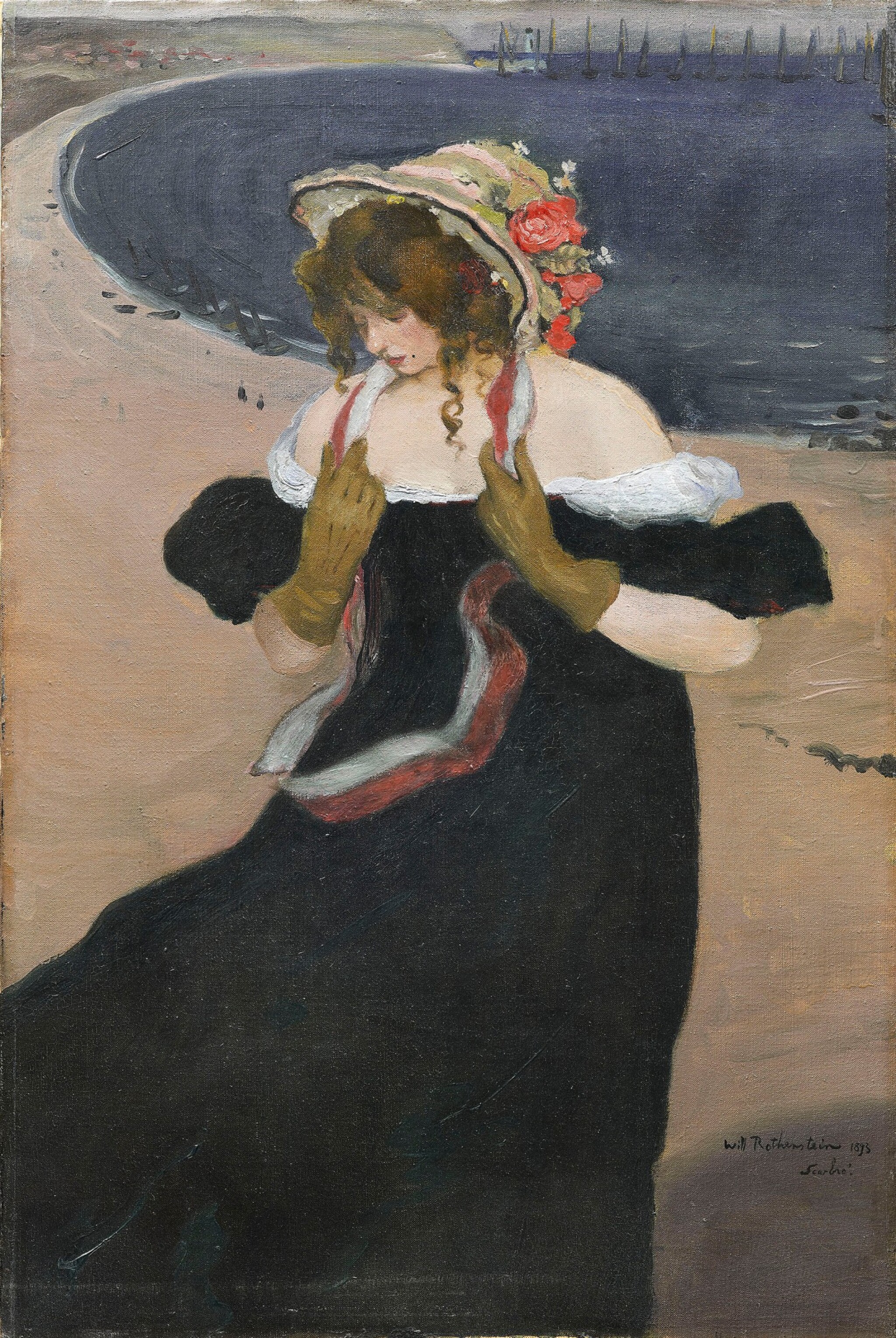 The canvas appears original. There is a very faint stretcher bar mark towards the lower edge. There are very fine lines of reticulation with some associated craquelure to the dark green/black pigment with a few further possible more minor instances elsewhere. There is a layer of varnish. This excepting, the work appears in very good overall condition.

Inspection under ultraviolet light reveals fluorescence and probable retouching in one or two places in the upper right quadrant. This has been very sensitively executed.

The work is held in a painted wooden frame.

Souvenir of Scarborough was painted in 1893 immediately after Rothenstein’s return from Paris and was exhibited at the New England Art Club the same year. Rothenstein first travelled to Paris in 1889 aged just seventeen where he attended the Académie Julian having studied at the Slade School in London. His talent was quickly recognised by Alphonse Legros and during the course of his stay the young Rothenstein came in to contact with, and was encouraged, by many of the principal artistic figures of the day including, Walter Sickert, James McNeill Whistler, Henri de Toulouse-Lautrec, Camille Pissarro and Edgar Degas. Whilst in Paris Rothenstein also became great friends with the Anglo-Australian artist Charles Condor and the two shared a studio in Monmartre.

The influence of these artistic friends and acquaintances on Souvenir of Scarborough is clear. Its paired back style and harmonius and closely modulated tones are highly reminiscent of Whistler and Sickert. The painting elicited positive reviews in the Studio magazine when it was exhibited at the New England Art Club:

'Primarily, however, it is a beautifully drawn figure with a dress that falls into harmonious and elegant lines. The colour scheme and the handling are alike admirably expressive of the motif of the picture. If Mr. Rothenstein may be taken as typical of the newest developments of the New English Art Club, in which frank naturalism is thrown over in favour of decorative and symbolic arrangements.'

Rothenstein himself held the work in high regard and he acknowledged its influence on the artist Aubrey Beardsley, whom he knew well, in Men and Memories: A History of the Arts, noting, ‘I have some hesitation in suggesting that paintings of mine – the Souvenir of Scarborough, for instance, and the studies of the girl in an 1830 bonnet exhibited at the New English Art Club, were not without their effect on Beardsley’s outlook.’ (Sir William Rothenstein, Men and Memories: A History of the Arts, 1872-1922, London, 1931-1932)

Souvenir of Scarborough was owned by Oliver Simon a friend of the Rothensteins and an influential printer and book designer who co-owned the Curwen Press and worked alongside many important figures in 20th Century British Art including Henry Moore and Barbara Hepworth.