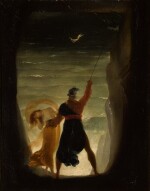 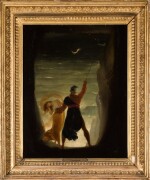 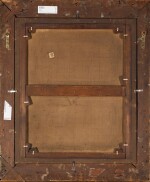 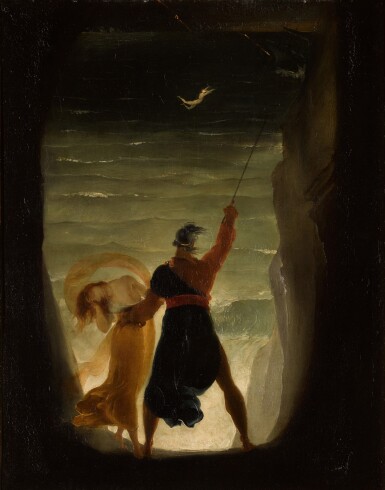 JOSEPH SEVERN | PROSPERO AND ARIEL, FROM SHAKESPEARE'S THE TEMPEST

JOSEPH SEVERN | PROSPERO AND ARIEL, FROM SHAKESPEARE'S THE TEMPEST

PROSPERO AND ARIEL, FROM SHAKESPEARE'S THE TEMPEST

The canvas is unlined and the painting is in very good condition overall, with no extant damage or loss of paint. Examination under ultraviolet light reveals a slightly opaque varnish overall and small scattered spots of retouching and fine lines infilling to the craquelure. These are scattered throughout the composition but primarily in the upper half of the painting and along the left and right edges in the darker pigments where some natural pigment seperation has occurred as a result of age. Overall this work is in good condition and is ready to hang.

Sold by her executors, 'The Duchess: Property & Precious Objects from the Estate of Mary Duchess of Roxburghe', London, Sotheby's, 27 May 2015, lot 145

The subject is taken from Act 1, Scene II of Shakespeare's The Tempest, with Ariel reporting to Prospero (who holds the sleeping Miranda in his arm) on his success in carrying out his master's command to shipwreck the King of Naples and his crew in a violent Tempest. This painting was one of many rare and beautiful objects and works of art discovered at West Horsley Place, following the death of Mary, Duchess of Roxburghe in 2014. Born Lady Mary Crewe-Milnes, she was the daughter of the Liberal statesman Robert Crewe-Milnes, 1st Marquess of Crewe (1858-1945), and the granddaughter of the poet and patron of the arts, Richard Monckton Milnes, 1st Baron Houghton (1809-1885). Lord Houghton owned several works by Joseph Severn, including Una Seizing the Dagger from the Despairing Red Cross Knight (1819), for which the artist was awarded a gold medal by the Royal Academy, and a watercolour version of his famous portrait of John Keats (now in the Vaughan Library, Harrow School), painted after the poet had died in Severn's arms in Rome in 1821. The original version is thought to be that in the collection of the National Portrait Gallery, London (NPG 58).

An artist whose importance is in need of a rediscovery, Severn began his career as an engraver’s apprentice and occasional student at the Royal Academy Schools, where he won a gold medal for history painting in 1818. In 1820 he accompanied his sick friend John Keats to Italy. After Keats’s death in 1821, Severn remained in Rome where he maintained a versatile practice as an artist, painting miniatures and altarpieces, landscapes and frescoes, historical and religious scenes, as well as subjects from the Bible, Greek mythology and Shakespeare. His pictures of Italian peasant life and pastoral genre scenes became very popular with British tourists on the continent and as his success grew his notable patrons came to include the Prime Minister W. E. Gladstone, Queen Victoria and Tsar Nicholas I of Russia. In the 1820s and 30s Severn was at the heart of the large British community in Rome, which included Ruskin, Walter Scott, Turner and Samuel Palmer, among others, and he was instrumental in helping to found the British Academy of Fine Arts in Rome, which drew the support of influential figures such as the Duke of Devonshire, John Flaxman and Sir Thomas Lawrence, President of the Royal Academy.

Following a brief spell back in London, in 1861 Severn returned to Italy where he was appointed British Consul in Rome from 1861 to 1872. A few months before his appointment Garibaldi had seized the Kingdom of Naples and Severn's knowledge of the Italian language, as well as his affability and good humor, were crucial in navigating a tense period in Italian politics. He died in Rome in 1879, at the age of 85, and is buried alongside his friend Keats in the Cimitero degli Inglesi in Testaccio. Between them lies the body of Severn’s son, Arthur, who died in infancy, one of seven children he had with his wife, Elizabeth Montgomerie, herself a noted artist who painted several portraits of the Royal Family.