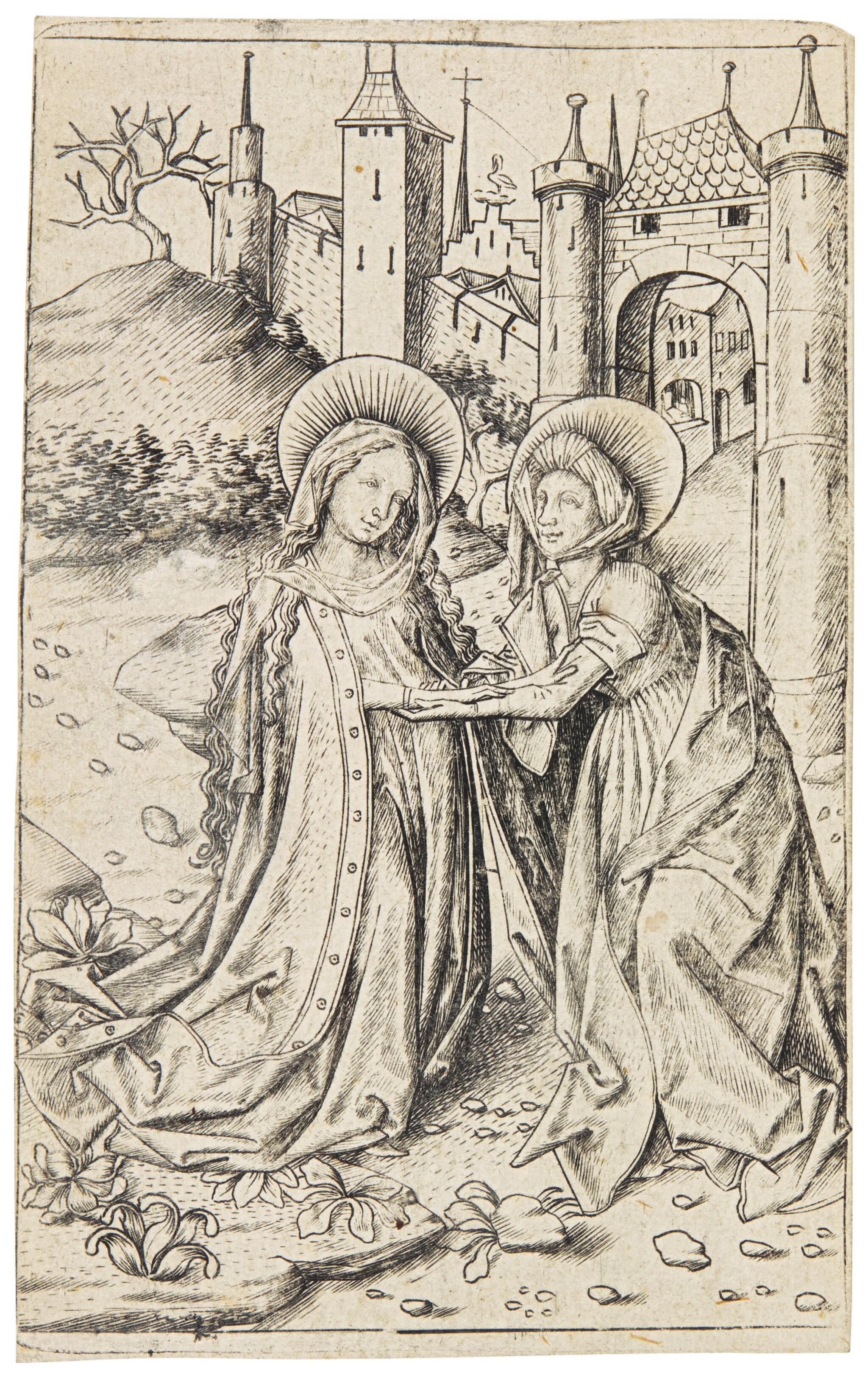 We are grateful to Nicholas Stogdon for his assisstance in cataloguing this lot.

With a thread margin below, trimmed to the plate mark above and outside the borderlines at left and right, in generally good condition, a few wormholes and thinning and a small assocated made up area to the left of the Virgin, a tiny brown stain on Saint Elizabeth's cloak and a fox mark on her arm, framed.

Certainly the impression recorded by Lehrs in the collection of the Counts Maltzan, Militsch, in Silesia (see Lugt 3024a), described by Lehrs as fine but a little uneven, and as having a margin top and bottom and some wormholes. The collection is particularly associated with Joachim IV von Maltzan (1593-1654) and was exceptional for its 15th century engravings; the sheets rarely bear any inscription. The late owner probably bought the print from Richard H. Zinser, who bought or at least sold the most important sheets in the postwar years, after the collection had been removed from the family home before it was overrun by the Russians. A residue was sold by C. G. Boerner in 1983. The late owner’s pencil inscription on the verso, to the effect that this is the impression formerly in the collection of Friedrich August II, King of Saxony, Dresden, is incorrect; that impression is stamped and was acquired by the Metropolitan Museum of Art, New York, in 1937

Master E.S., a goldsmith, was the most important engraver active in the two decades following 1450, and the first graphic artist to sign his engravings with a monogram. Following the Master of the Playing Cards, he is the second great personality to dominate the history of German engraving. The present work, dating from mid-century, precedes the artist’s monogrammed prints which are mostly dated 1466 and 1467.

Like all engravings by Master E. S., this engraving is of the utmost rarity. Lehrs recorded five impressions and no more have appeared since. These are in Berlin; London, British Museum; New York, Metropolitan Museum of Art (formerly Friedrich August II, Dresden); Paris, and the present impression, formerly in the Maltzan Collection, Militsch.

Alan Shestack argues that the similarity of treatment between this extremely rare and important work with The Annunciation (L. 9), The Nativity (L. 20), and The Adoration of the Magi (L. 25) indicate that they belong to a series of scenes from The Life of the Virgin, either left incomplete or not surviving in its entirety. Of these an impression of The Adoration of the Magi also originates from the Maltzan collection, Militsch, which was exhibited alongside the Metropolitan Museum impression of the current work in Master ES, Five Hundredth Anniversary Exhibition, Philadelphia Museum of Art, 5 September to 3 October, 1967, cat. nos. 51 and 50 respectively (A. Shestack)