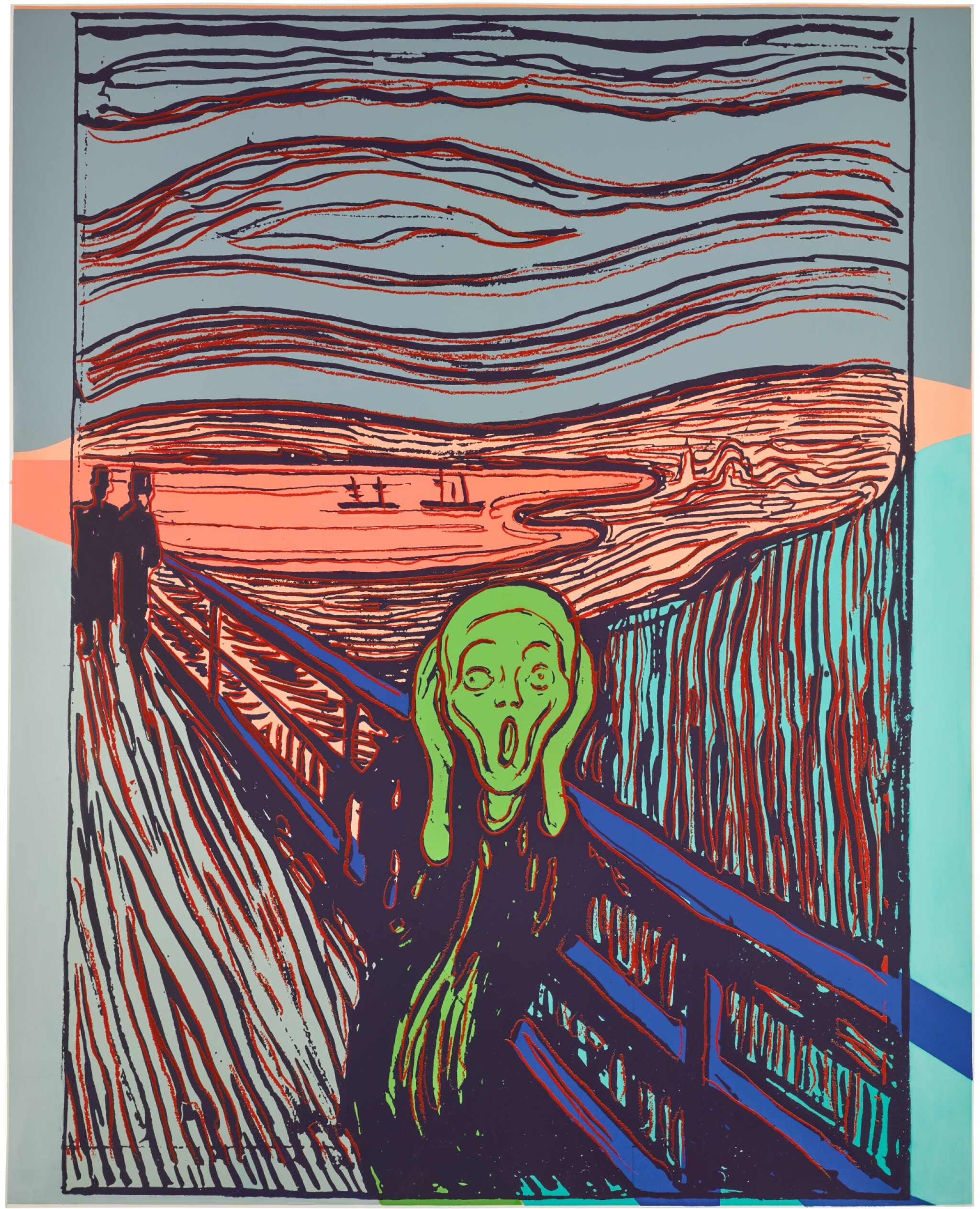 Screenprint in a unique combination of colours with an experimental pale wash in the lower border at left and right, 1984, from a small unpublished edition of unique colour variants, with the Andy Warhol Foundation for the Visual Arts inkstamp verso, annotated 'UP34.25' and 'VF' in pencil, printed by Rupert Jasen Smith, New York, on Lenox Museum Board, framed

The full sheet, printed to the edges, the colours fresh, in good condition, a few very slight scuff marks (only visible in a raking light), framed.

The following are inherent to product: the experimental pale wash in the lower border at left and right, areas in the dark blue ink in lower left quadrant have thin overlayers of purple ink in places, most visible in the short diagonal line at lower left where the darker blue has not printed

Please contact the department for a professional conservator’s opinion.

Please note that Lot 178 has been withdrawn from the sale.

At first glance, the twentieth century icons appear worlds apart. A close consideration of Andy Warhol’s After Munch series, however, reveals that the Pop pioneer and his printmaking predecessor were, surprisingly, kindred spirits. Edvard Munch’s oeuvre was shaped by many of the same philosophical preoccupations which would later define Warhol. Also, both artists advocated use of colour and repetition as a means of exploring psychological and emotional complexities.

Warhol began reflecting on art history as early as 1963 by reproducing its most ubiquitous image of Leonardo da Vinci’s Mona Lisa in a series of paintings, however, it wasn’t until 1973 that Warhol first encountered Munch’s prints during a tour of Oslo. There he developed an affinity for the painter-printmaker’s experimental woodcuts and lithographs at the National Gallery and Munch Museet. Dazzled by Munch’s woodcuts and lithographs, Warhol began collecting his prints immediately. The two artists reunited in New York a decade later when Warhol fatefully happened upon a Munch retrospective at Galleri Bellman just minutes away from Warhol Enterprises. Impressed by the 126 paintings and graphic works on view, Warhol returned to Bellman repeatedly, especially captivated by the Norwegian’s experimental prints. Bellman eventually commissioned their frequent visitor to create 15 paintings after Munch artworks of his choice.

Warhol elected to emulate four of Munch’s best-known lithographs (it is noteworthy that Warhol choose the printed medium rather than the paintings), re-interpreting them on canvas for the series Art from Art: The Scream, The Brooch. Eva Mudocci, Madonna, and Self-Portrait.

Delighted with Warhol’s results, Galleri Bellman then proposed that he collaborate with the renowned printer Rupert Jasen Smith to create After Munch screenprint portfolios in a similar Pop-infused vein. Warhol was meant to create an edition of 180 portfolios, each comprising three screenprints, plus 36 artist’s proofs. The project was halted, however, when the gallery closed unexpectedly, leaving the artist with an unknown number of trial proofs in unique colours.

The iconic Scream stands out as the most imminently recognisable images of art historical importance. The subject is an expression of the 'great, ceaseless scream passing through nature', and considered the most profound representation of man’s existential angst. Just as he did in Race Riots, Electric Chairs and Death and Disaster series, Warhol ignores the emotional content, and concentrated instead on the work as a symbol of popular culture. Just as Marcel Duchamp and Warhol himself has done with Mona Lisa, he made the most famous expressionist painting his own.

In a move of postmodern brilliance, Warhol mastered the screenprinting technique and use of colour to present the viewer with an advanced interpretation of the human condition of the twentieth century. In the present work, the deep grey sky coupled with the pink and peach water, contrasted with the bright red outlines and overpowering, ghastly green figure are fantastic. We experience a vivid scene, a glimpse of Warhol’s perception of the world, filled with synthetic colour, psychedelic revelry, but ultimately lonely. A compellingly apt metaphor for a world turned upside down. Quintessential Warhol.