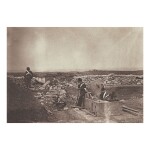 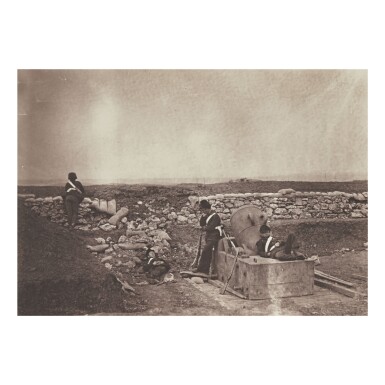 ROGER FENTON | A QUIET DAY IN THE MORTAR BATTERY

ROGER FENTON | A QUIET DAY IN THE MORTAR BATTERY

A QUIET DAY IN THE MORTAR BATTERY

salt print from a wet collodion glass negative, mounted, with lithographed credit, title, date, 'No. 56,' and publisher's information on the mount, 1855, printed in 1856

Grading this salt print on a scale of 1 to 10 – a 10 being a print that has rich, deep dark tones and highlights that retain all of their original detail – this print rates a strong 9. The intricate details of the solders' uniforms and the rock wall can be seen.

This salt print is in generally excellent condition. It has light scratches in the upper half.

The mount is soiled, darkened at the edges, and has numerous fox marks that do not affect the photograph. There are two one-inch tears are at the upper edge of the mount. Lithographed in the lower margin is the following information: 'Deposé'; 'No. 56'; 'Photographed by R. Fenton Manchester, Published by F. Agnew & Sons Jan. 1st 1856 / London P & D. Colnaghi & Co. Paris, Moulin 23 Rue Recher New York, Williams & Co.' and 'A quiet day in the Mortar Battery.' 'F405' is inscribed in pencil in an unidentified hand.'

Its reverse is lightly soiled, darkened at the edges, and annotated iin an unidentified hand in pencil '300602.5.'

In 1855, Roger Fenton traveled to the Black Sea to photograph the Crimean War, thus creating the first in-depth photographic documentation of warfare (see also Lot 115). Fenton captured the allied British, French, and Turkish armies as they fought their Russian adversaries. The riveting scenes are set against the austere landscape of the Crimean Peninsula, its harbors, and the rough military encampments that housed the soldiers.

A colorful review published in The Athenoeum (29 September 1855) offers insight into contemporary reception of this photograph: '...there is no scene so suggestive and full of local coloring as the Quiet Day in the Mortar Battery...the mortars sleep in the embrasure, jammed with plump sand bags and broken baskets. The soldiers are perfectly luxurious in the lotus eating sense of the repose of twelve hours without thunder or lightening, noise, or death. One imperial gunner sleeps on the carriage of a mortar, the widow maker being his bed, pillow, sofa, everything. Another, less ambitious, is flat on his back in the sand, the shells all around him; but as long as they are not moving he cares not. Another watches dreamily, like a sailor whistling for a wind, over the parapet, wondering why 'the darned Roosians don't take down the shutters,' as he calls it, very quiet and snug, yet this place is Death's favourite reception-room, and has been quite a shambles not five hours ago' (quoted in Kraus, Sun Pictures Catalogue Fourteen, p. 60).

At the time of this writing, no other print of A Quiet Day in the Mortar Battery is believed to have been offered at auction. Prints of this image have been located in the following institutional collections: Mead Art Museum, Amherst College; the Art Institute of Chicago; The Museum of Modern Art, New York; the J. Paul Getty Museum, Los Angeles; the Royal Collection Trust, London; and the National Army Museum, London.