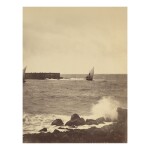 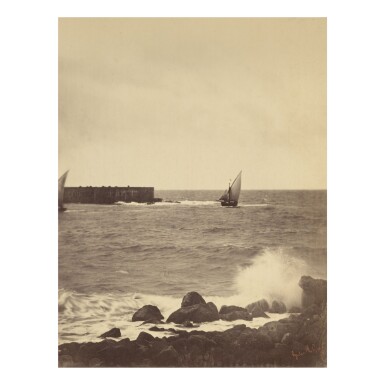 Grading this albumen print on a scale of 1 to 10 – a 10 being a print that has rich, deep dark tones and highlights that retain all of their original detail – this print rates a strong 9. It has exceptional detail in the sprays of water, crashing waves, and rocky shoreline.

The print is in generally excellent condition. There is expertly applied retouching, likely original, in the lower half. There are some small impressions across the surface of the print that are only visible in raking light, and very faint soiling in the highlights in the upper half. There is some foxing, faintly visible, in the sky.

The print is mounted on the photographer's preferred mount, made by his friend Ernest Binant (Aubenas 369), whose blindstamp is on the upper right corner of the reverse.The mount is soiled and appropriately age-darkened. There is edge and corner wear as well as a 3/4-inch diagonal tear at the lower edge. There are a few scattered foxmarks.

The reverse is age-darkened at the upper edge and soiled overall. It has scattered foxmarks.

In December 1856, Gustave Le Gray first publicly exhibited his revelatory seascapes at the Photographic Society in London (see also Lot 124). Taken from the Normandy shoreline, these wholly new images were greatly admired by the public and caused a sensation in the press. The Norfolk News commented on the exhibition: ‘However painful it may be to our national vanity, we must at once admit that the new picture by [Frenchman] Gustave Le Gray is not only the finest in the room, but the grandest effort that we ever saw in photography’ (quoted in Jacobson, p. 9). Over the next two years, Le Gray completed more than thirty large-format marine studies, including many images, such as this example, that were made near the port of Sète, France, on the Mediterranean coast.

One of his most celebrated works, The Breaking Wave is unique in that it is his only vertical seascape composition. As is often the case with these remarkable photographs made from collodion-on-glass negatives, the sky exhibits less detail so that the shoreline and water can reveal their intricate imagery. The present photograph displays exceptional clarity in the foreground: the craggy rocks reveal brilliant detail and modelling while the frothy swells of water communicate the powerful energy and motion of the sea. The plume of water from the crashing wave remains bright and crisp. In the middle ground, the individual pillars of the Sète pier can be clearly seen. The sailboat at the center of the composition is strong and poised as it tilts into the wind.

Not only did the large format and high level of detail of these albumen prints garner widespread attention, but the subject matter also tapped into a long history of marine imagery. Le Gray’s take on this genre alludes to seventeenth-century Dutch paintings by the likes of Willem van de Velde the Elder, Albert Cuyp, and Jan van Goyen, as well as late eighteenth- and early nineteenth-century romantic and sublime canvases by Caspar David Friedrich, Thomas Luny, and J. M. W. Turner. In turn, Le Gray’s The Breaking Wave and other marine studies were the first photographic seascapes to garner critical acclaim.