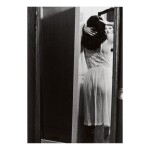 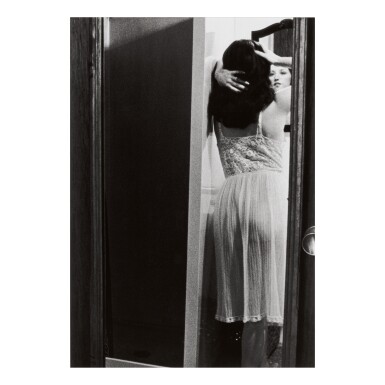 This photograph is in generally excellent condition. It is flush-mounted to thick board. The following are visible in high raking light: a very soft crease near the left edge of the sitter's skirt hem, possibly a result of the mounting process; and 2 one-inch parallel hairline scratches in the upper left quadrant. There are 2 tiny deposits of original retouching near the sitter's skirt hem that have shifted slightly in tonality.

Cindy Sherman’s ground-breaking series Untitled Film Stills (1977-1980) comprises 70 images of the artist dressed in various female guises. These black-and-white photographs—Sherman’s most well-known and celebrated body of work—solidified her artistic practice of using her own body as the main element in the expanding repertoire of portraits that she continues to make. The provocative moment captured in each Untitled Film Still suggests a rich story, but Sherman never fills in the heroine’s circumstances. Instead, each viewer must imagine the details for him or herself. Likewise, Sherman did not title the Film Stills so that they retain their ambiguity and open-endedness.

‘Some of the photographs are meant to be a solitary woman and some are meant to allude to another person outside the frame,’ Sherman has noted (The Complete Untitled Film Stills, p. 8). Untitled Film Still #81 seesaws between these two scenarios. Is the raven-haired woman in a lacy slip observing herself in the vanity mirror, or is someone watching this coquettish performance from the room beyond the bathroom door? Is she getting ready to go to sleep (in this case, her slip becomes a nightgown), or is she preparing for a rendezvous with her lover? The compressed space of the hallway and bathroom highlight the lithe lines of her body. The reflection of her face, framed by her own arm and hair, creates a complex composition that challenges us to make spatial sense of the compact environment.