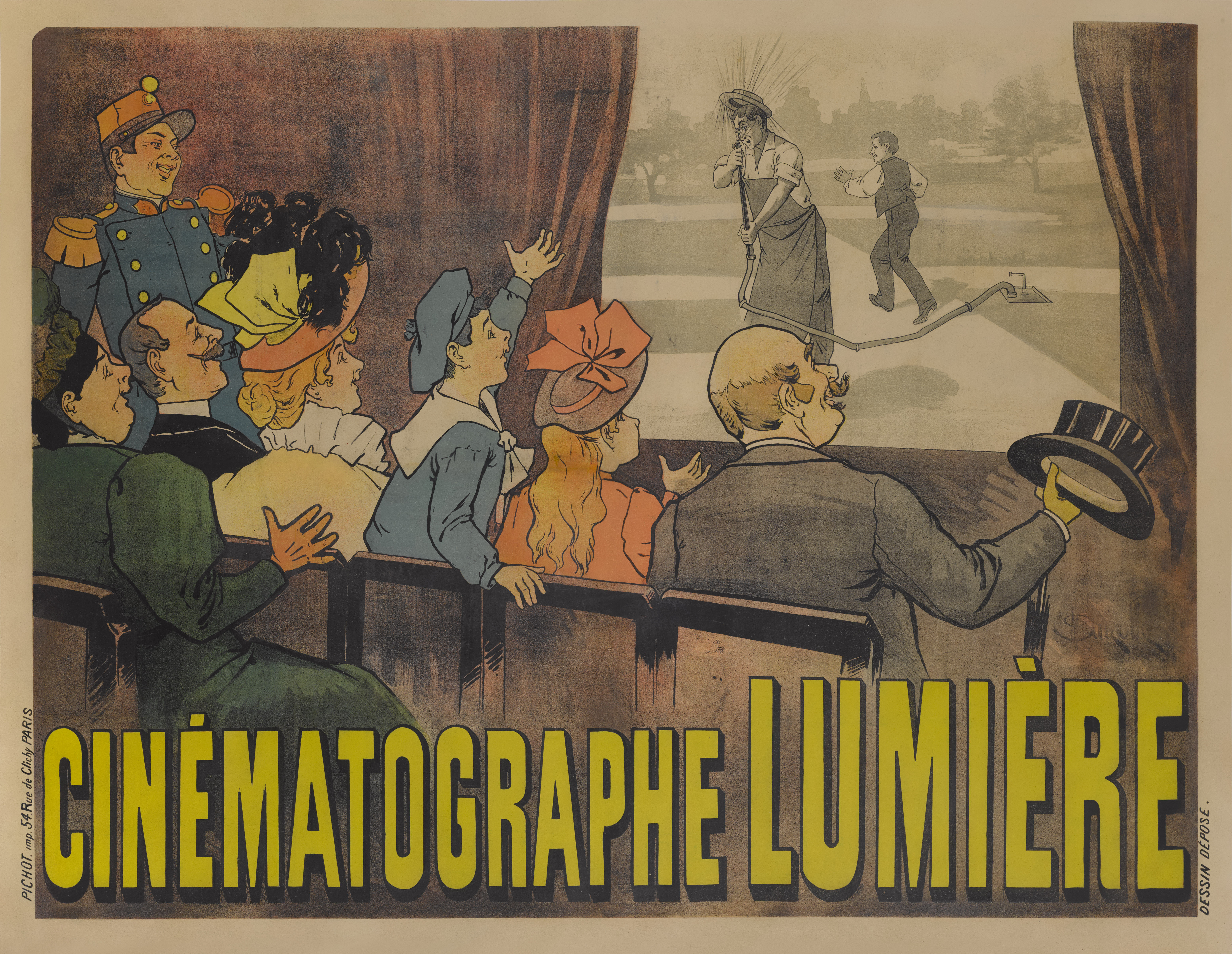 This is the ultimate collectors poster and a true museum piece, as it is one of the two inaugural posters designed for the first every public screening of a film in 1895. The first screening took place on the 28th December 1895, and the posters were not printed until early 1896.

This exceptionally rare piece has only surfaced a handful of times.

The first public screening of any film took place on the 28th December 1895 in the Salon Indien of the Grand Cafe, on Boulevard des Capucines in Paris. It was a humble event, with an audience of less than thirty people in attendance, and lasted approximately twenty minutes. It marked the public beginning of one of the most important cultural, artistic and social phenomena of the 20th century. Victor Perrot, who witnessed the event, writes about that winter evening in various articles and memoirs, calling it a 'great historical first'. The Grand Cafe in question was a meeting place for gentlemen billiard players. Its small basement was decorated in the style of an oriental lounge. On the occasion of Lumière's screening, a white canvas resembling a bed sheet had been hung at one end, with Lumière's famous cinématographe stationed on a step ladder amidst some 100 chairs borrowed from the Grand Cafe. The screening included a selection of the Lumière's short films, each film lasting no more than a minute. Some greeted the screening with suspicion, whereas others seemed utterly shocked by the experience. When the lights went down, Perrot relates that one lady uttered a shriek of terror. Later on, there was wide spread talk of magic and trickery, as though the moving images were the ruse of a clever conjurer. One man complained that it was unfair to make a mockery of the public in such a way. Members of the press who had been invited to the screening did not show up, although surprisingly, within two days of December 28th, it was featured in most newspapers. The success of the cinématographe was then almost immediate. On January 1st and 2nd 1896 between 2,000-2,500 spectators paid 1 franc each to see Lumière's collection of moving images. Posters advertising the screenings were printed and pasted on the walls in Paris. Two styles were designed, one by H. Brispot, which shows a throng of people waiting to enter the Salon Indien, and this style, which features a jovial audience watching the screen, which is showing the first comedy film, L'Arroseur Arrose / The Sprinkler Sprinkled. Within a few months, Lumière cinemas had opened in all major international cities, and screenings had been held for most heads of state, Kings, Queens and even the Tsar and Tsarina of Russia.