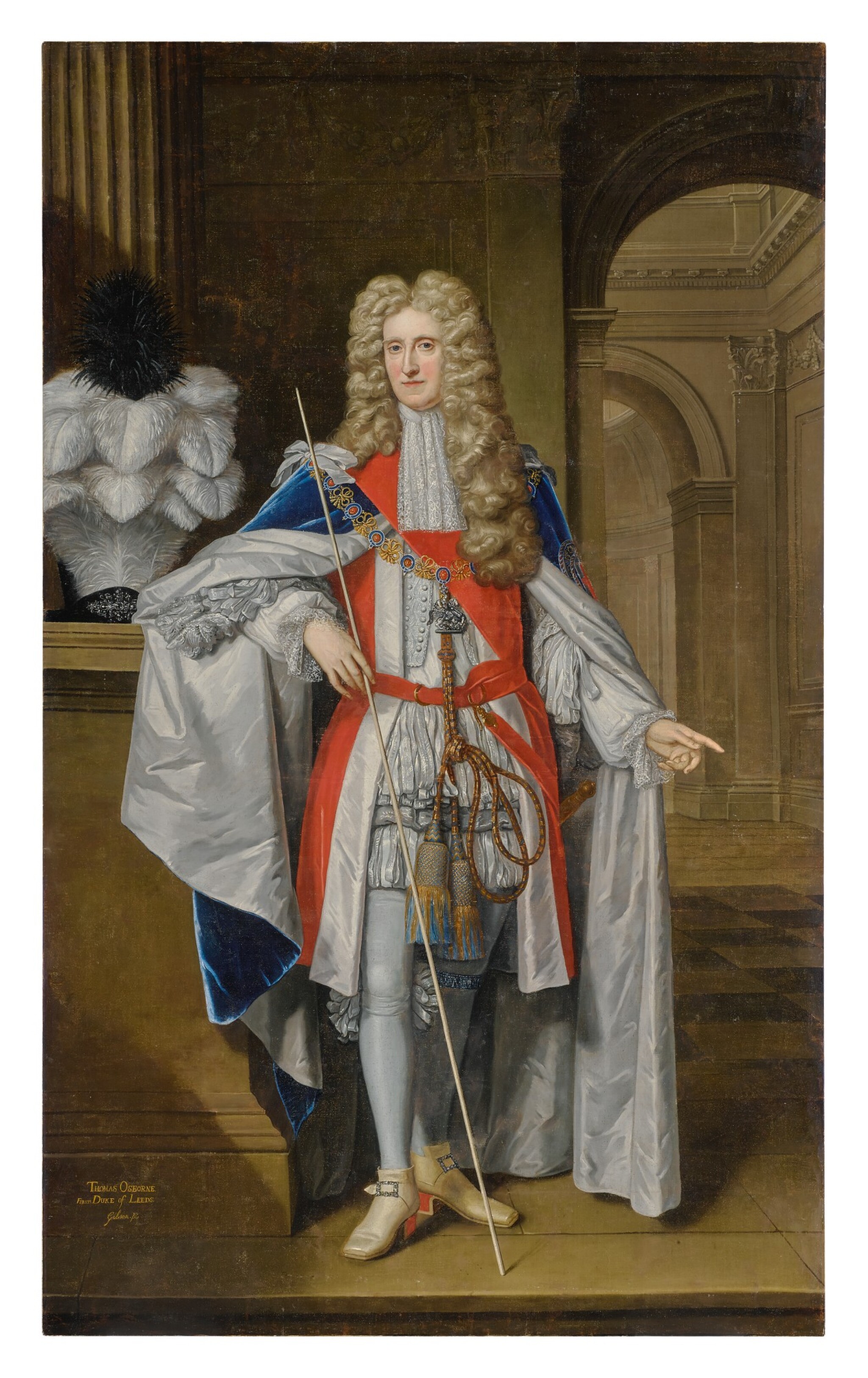 The canvas has a modern relining and stretcher. Overall the painting presents a strong, vibrant, and impressive image beneath a clear varnish. Scattered areas have thinned in the relining process, and a horizontal canvas seam runs across the portrait just below center. The painting has been restored relatively recently. UV light reveals a few repaired tears and punctures of varying sizes throughout, for example in his hand at left, near the center of his chest, in the lower right quadrant, and in the upper background. These repairs are all stable. Retouching is visible along the aforementioned seam. There are spots and strokes of retouching as well as some passages of strengthening in the figure and his costume, including his plumed hat, with some thin strokes in his face and chin. Retouching is also visible throughout the background, with some more liberally retouched areas than others. No further work is required. The painting should be framed. Offered unframed.

There acquired by parents of the present owner, and thence by descent.

This elegant and imposing portrait is one of several depicting Thomas Osborne by important 17th and 18th century English painters. The likely original version, signed and dated 1704 by Johann Kerseboom and Jan van der Vaart, is today in the National Portrait Gallery in London,1 and a second version by Kerseboom is in the collection of the Dukes of Norfolk at Arundel Castle. The National Portrait Gallery also holds another full-length portrait of this sitter by the studio of Sir Peter Lely.2

Thomas Gibson most likely painted this portrait for his most important patron, John Poulett, first Earl Poulett (1663 – 1743) who commissioned many originals and copies of portraits of famous sitters. A portrait of Danby by Gibson "drawn when at the University" was listed in the 1798 inventory of Dupplin Castle, and may be a related composition.3 Gibson was at the height of his career at the time of Lord Danby’s death, having been named founding director of Godfrey Kneller’s Academy in London in 1711. In the present portrait, Osborne wears the lavish costume of a Knight of the Garter and holds the long white wand that signifies his role as Lord President of the Council, a title he held from 1689 until 1699.

Thomas Osborne was a prominent English politician and staunch Royalist that entered public life as MP for York in 1665 and became Treasurer of the Navy in 1668. In 1673 he became Lord High Treasurer to Charles II; he was created Earl of Danby in 1674 and received the Order of the Garter in 1677. A conflict of interest and Danby’s animosity toward the French led to his falling out of favor with his peers, expulsion from Parliament, and eventual five-year imprisonment in the Tower of London. On the accession of James II, Danby was reinstated to the House of Lords as leader of the Tory party but quickly found himself opposed to James’s attacks on the Anglican Church. A longtime ally of the Dutch, he was one of the group of statesmen known as the “Immortal Seven” who invited William III of the Netherlands to depose James II in the Glorious Revolution of 1688. After William and Mary (James’s daughter) succeeded the throne, Danby was named Lord President of the Council in 1689 and created Marquess of Carmarthen the same year. After a short tenure as chief advisor to the Queen in 1690, his political influence began to wane, but at the same time he enjoyed success as a naval officer and was created Duke of Leeds in 1694. He married Bridget, daughter of the 2nd Earl of Lindsey, in 1651, and they had nine children, although only four survived Danby.4