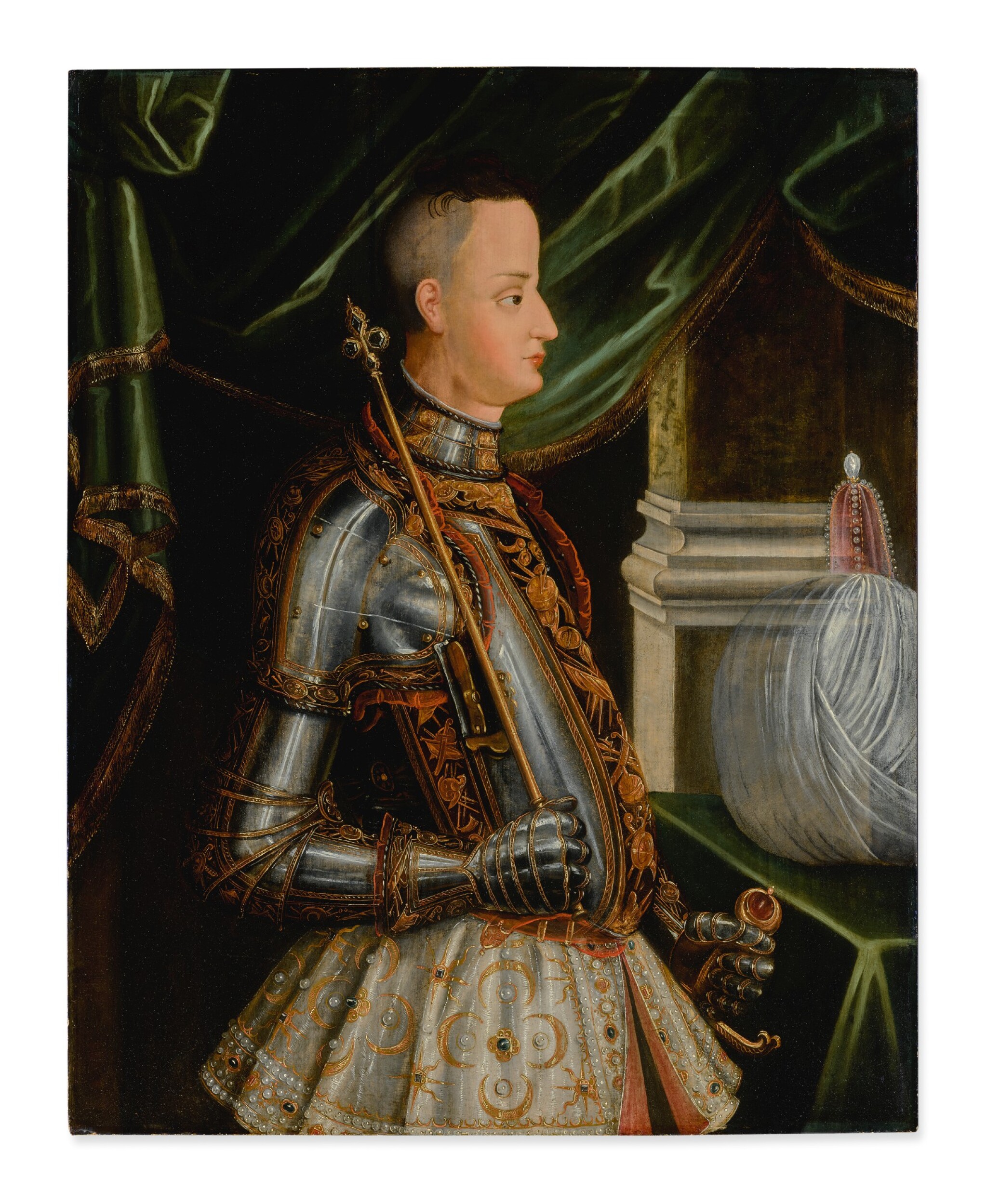 PORTRAIT OF AN AMBASSADOR

The panel is uncradled, stable, and has a slight convex bow, which is supported by a custom insert in the frame. It is made of three boards joined vertically, and the left join is reinforced on the reverse with several vertical battens. There is a shallow piece of triangular wood, about 10 by 7 cm, that has been cut out of the reverse of the lower right corner. The overall image reads strongly beneath a crisp varnish, and the painting seems to be in overall good condition. Despite some thinning, such as in the sultan's hat on the table at right, the colors used remain vibrant and many of the details are nicely preserved. Retouching to the vertical joins are visible on the painted surface. Two additional vertical lines of retouching are visible towards the right edge (possibly to address old cracks). A few discolored retouchings can be seen in the figure's face, including the shadows of his chin as well as some spots and strokes in the background, and some strengthening is scattered in his armor. There is a small diagonal scratch in the upper left corner. Inspection under UV light reveals the aforementioned retouches to the joins, as well as to the figure's face and armor. There are some additional small strokes and spots scattered in his hair and in his costume. The painting can certainly hang in its present condition. Offered in a black painted wooden frame with a decoratively carved gilt liner.

Dendrochronological testing of this oak panel indicates a likely execution date of between circa 1590 and circa 1606.1 The clearly expensive outfit of the sitter implies he was a person of significant standing and he has been tentatively proposed to be an ambassador of the Ottoman Empire to the Habsburg Court. One possibility would be Ibrahim, the Polish convert Joachim Strasz (died 1571), who went to Frankfurt on a celebrated mission in 1562, and to Austria in 1568. Another possible identification might be the dragoman-diplomat Mahmud Bey (before 1526-1575), who was of Hungarian origin, and went to Prague in 1575.2

The armor the sitter wears is probably Augsburgian but with some anomalies in design which make it difficult to identify with any certainty. The underskirt is woven with silver thread, and is decorated with the crescent moon of Islam and with eight pointed stars, each woven in gold thread and stitched with pearls and gemstones; the armor is trimmed in red velvet and edged in a running motif of musical instruments. Relations between the Habsburg Monarchy and the Ottoman Empire at the turn of the century were fractious. The Long Turkish War (or Thirteen Years' War) only finished in 1606 with the successful resistance of the Prince of Transylvania, Stephen Bocskay (who had the support of the Ottoman Empire), to the forces for Emperor Rudolf II, which resulted in the Treaty of Vienna. The treaty significantly stabilized the Habsburg–Ottoman frontier. A 1596 print of Bocskay's nephew, Sigismund Báthory, Prince of Transylvania (1573–1613), depicts the sitter with a similar hairstyle to that of the present sitter, with its unusual shaved sides and longer upper mantle.

Infrared reflectography does not reveal any distinct underdrawing, but a number of significant pentimenti are visible. The sitter was initially depicted between two square columns. It would appear that the green curtain was added at a later stage, and was painted over the aforementioned columns. During the addition of the curtain, the profile of the sitter and positioning of his arm was adjusted. The table with the turban was also painted over the right hand column. The now concealed columns both appear to have been quite finished suggesting that this compositional change occurred late in the painting's execution.