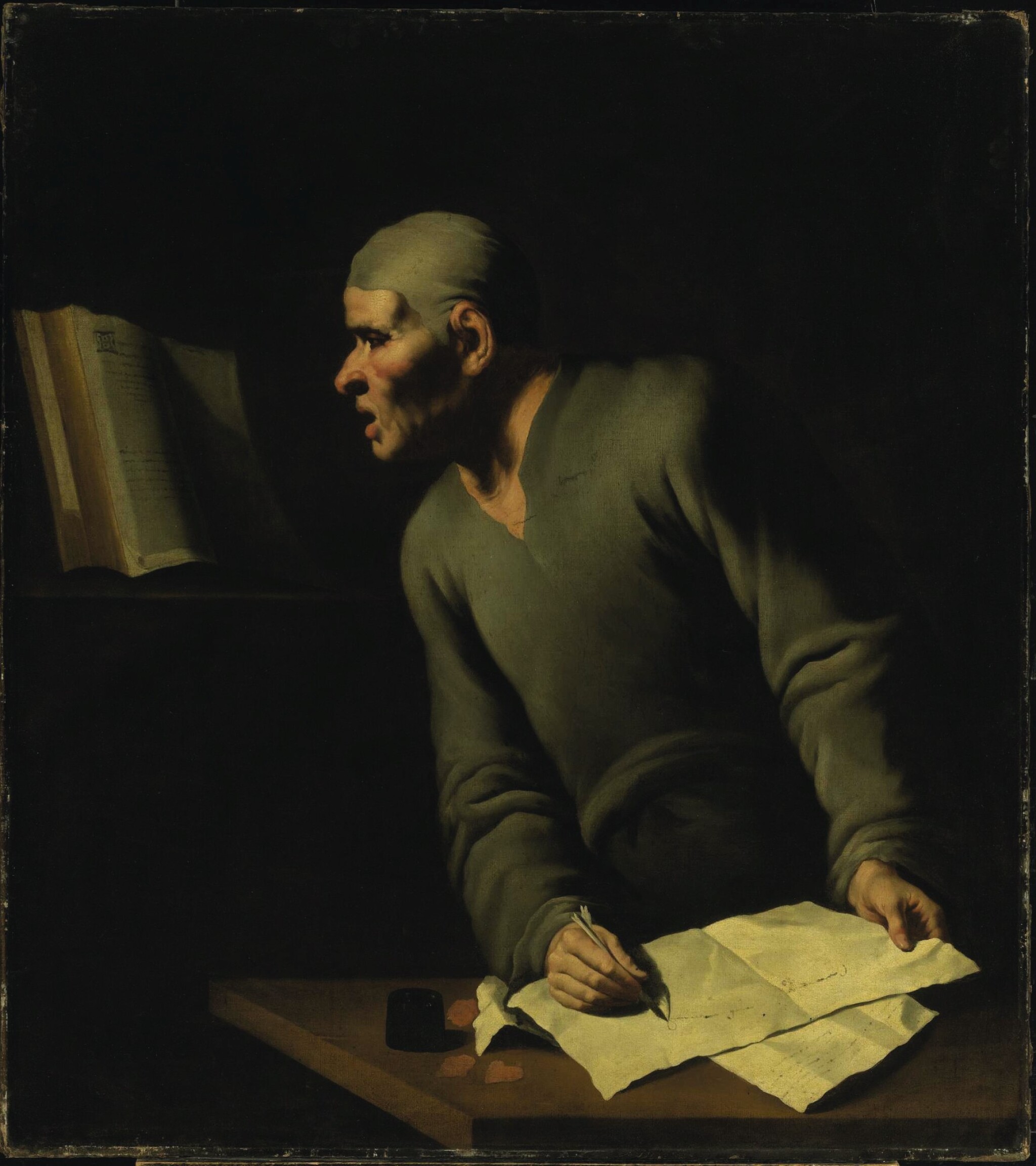 MASTER OF THE ANNUNCIATION TO THE SHEPHERDS

PORTRAIT OF A SCHOLAR

The painting has a recent glue relining. Under a very dirty and discolored old varnish. The surface, except for some old repaired localized holes and small repairs, has not been addressed in a long time. The paint surface itself appears to be in good state, and removal of this old varnish will make it much more striking. Under UV: old damages are localized in unimportant areas of the composition, including an old repaired hole at lower left which may have included a loss to the original canvas (about 2.5 inches high), a small compound tear to the left of his sleeve lower center, a small repair of about 1inch in the white document below his hand, a slightly larger spot of repair above the same hand, some scattered repairs in the upper right. Otherwise, the restorations are scattered and very minor. In a 19th century Louis XIII style giltwood frame, with a loss to the inner liner at lower right corner, at bottom and up the side.

Purchased from the descendant of an early owner by John Chaundy, Oxford, England; From whom purchased by George Shea in 1889;

G. Shea, Some Facts and Probabilities Relating to the History of Johannes Scotus, Surnamed Duns, and Concerning the Genuineness of the Spagnoletto Portrait Belonging to the General Theological Seminary of the United States, Cambridge 1890, pp. 1-31, passim.;

Although his firm identity has been elusive, the Master of the Annunciation to the Shepherds is one of the most interesting and individual artists working in Naples in the first half of the 17th Century, and his output represents a cohesive body of work of very high quality. Nicola Spinosa will publish the present work in his monograph on the artist (forthcoming in 2020/21) as cat. no. 60b, an autograph version of a painting by the Master in the Royal Collection, Hampton Court (inv. RCIN 404967).1

For many years, the present work was in the collection of the General Theological Seminary where it was considered a depiction of the theologian John Duns Scotus by Giuseppe de Ribera, as was the canvas at Hampton Court. However, the connection of the Hampton Court painting to Duns Scotus was doubted as early as 1958, and the subject would appear to represent an unspecified scholar or philosopher, the type of image then popular amongst Neapolitan collectors.2 In a 1983 article in The Burlington Magazine, Giuseppe di Vito pointed out the strong similarities between the Hampton Court version of the "Duns Scotus" portrait and figures portrayed in three paintings given to the Master of the Annunciation to the Shepherds, active in Naples circa 1620-40, and influenced by the works of Ribera. These include the figure of the rabbi in Christ Among the Doctors in Powerscourt House, Dublin; the rabbi in another painting of this subject in the Museo di Capodimonte, Naples; and Man in Meditation in the Alte Pinakothek, Munich.3

We are grateful to Nicola Spinosa for endorsing the attribution in full to the Master of the Annunciation to the Shepherds, and for his observations on the painting.﻿

1. Other versions of varying quality are in the collections of the Musée des Beaux-Arts, Pau; Bodleian Library, Oxford; Earl of Wemyss, Gosford House; Merton College, Oxford; and formerly the Houston Gallery, Wells, Somerset in 1967.