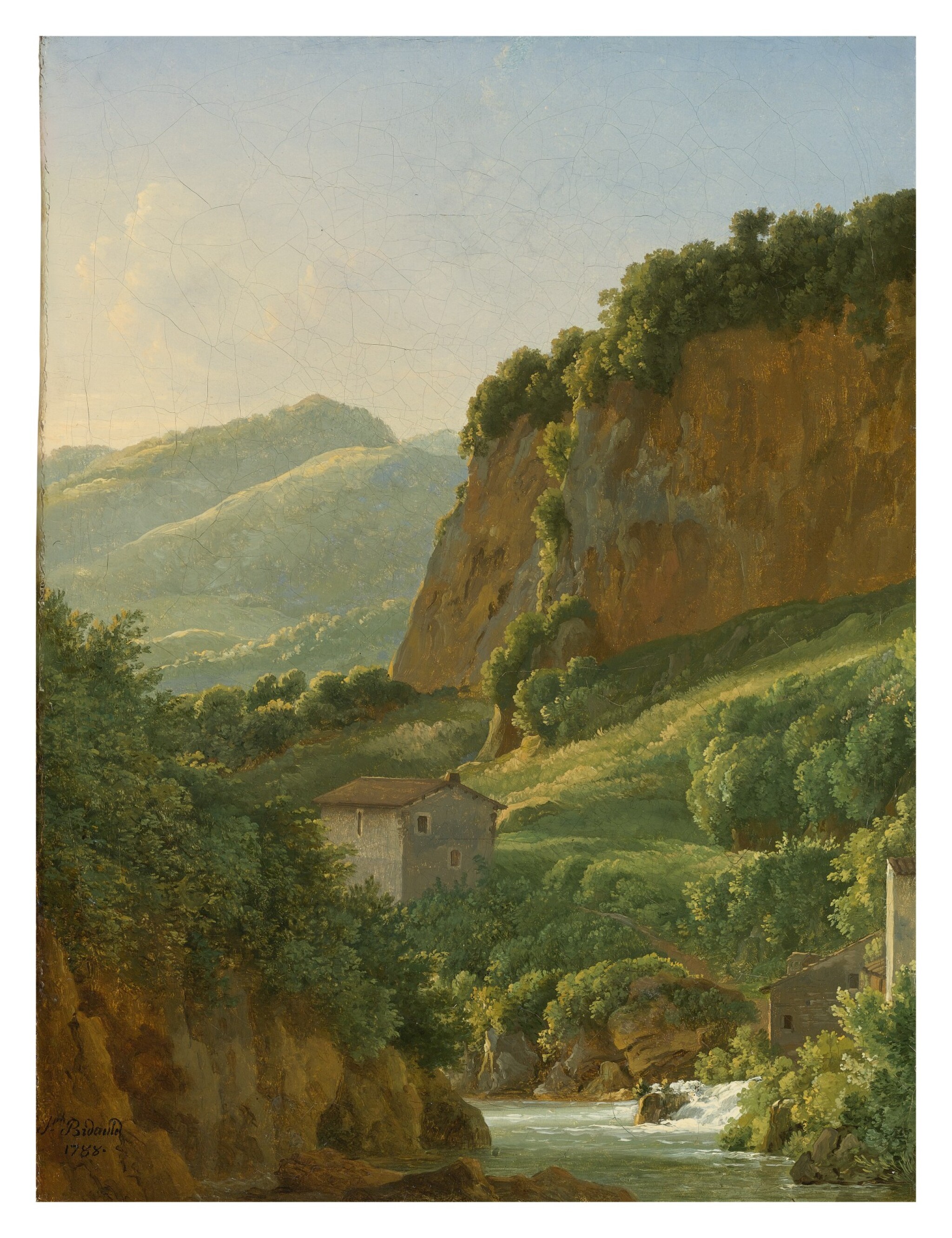 VIEW OF THE RAVINE AT SAN COSIMATO

inscribed on the verso: a St Cosimato

This painting is in lovely state. The canvas is unlined, and could be on its original stretcher. The painting reads well and is clean and varnished. The painting layer is in overall extremely good condition, with only a small retouch in the upper center, one on the right edge of the cliff, and a small spot in the lower left. Offered unframed, but once framed it could certainly hang as is.

From whom acquired by Robert M. Edsel, Dallas, Texas;

Painted while Bidauld was in Italy, View of the Ravine at San Cosimato was once a part of the well-known collection of Jules Burat (1807-1885). A gentleman amateur, Monsieur Burat amassed a collection that spanned three centuries of French art. He owned works by Simon Vouet, had particularly strong holdings of the French 18th century, and even owned works by David and Gros. By focusing his interests on artists who had fallen from contemporary critical favor, Burat was able to assemble a group of pictures that included the works of Le Moyne, Lancret, Pater, Nattier and Chardin, among others. A philanthropist, Burat often loaned paintings to local charity shows and other organizations and was thus a well-known figure in the Parisan art world of the mid-nineteenth century.2 The present work was one of four paintings by Bidauld that Burat owned at the time of his death.

The crisp, clear light and idyllic, unpopulated hillsides of the present canvas are indicative of Bidauld's oeuvre. The artist continued to paint scenes of the Italian countryside throughout his career, even after his return to France, using his numerous and exhaustive preparatory sketches—done en plein air—as guides for later compositions.

This painting will be included in the forthcoming catalogue raisonné on the artist by Stephane Rouvet.

1. An annotated copy of the sale catalogue at the Frick Collection in New York, lists the purchaser as "Rubin" and quotes a hammer price of 130 FF.

2. For more information on Jules Burat and his collection, see Paul Mantz's introduction to the 1885 sales catalogue.