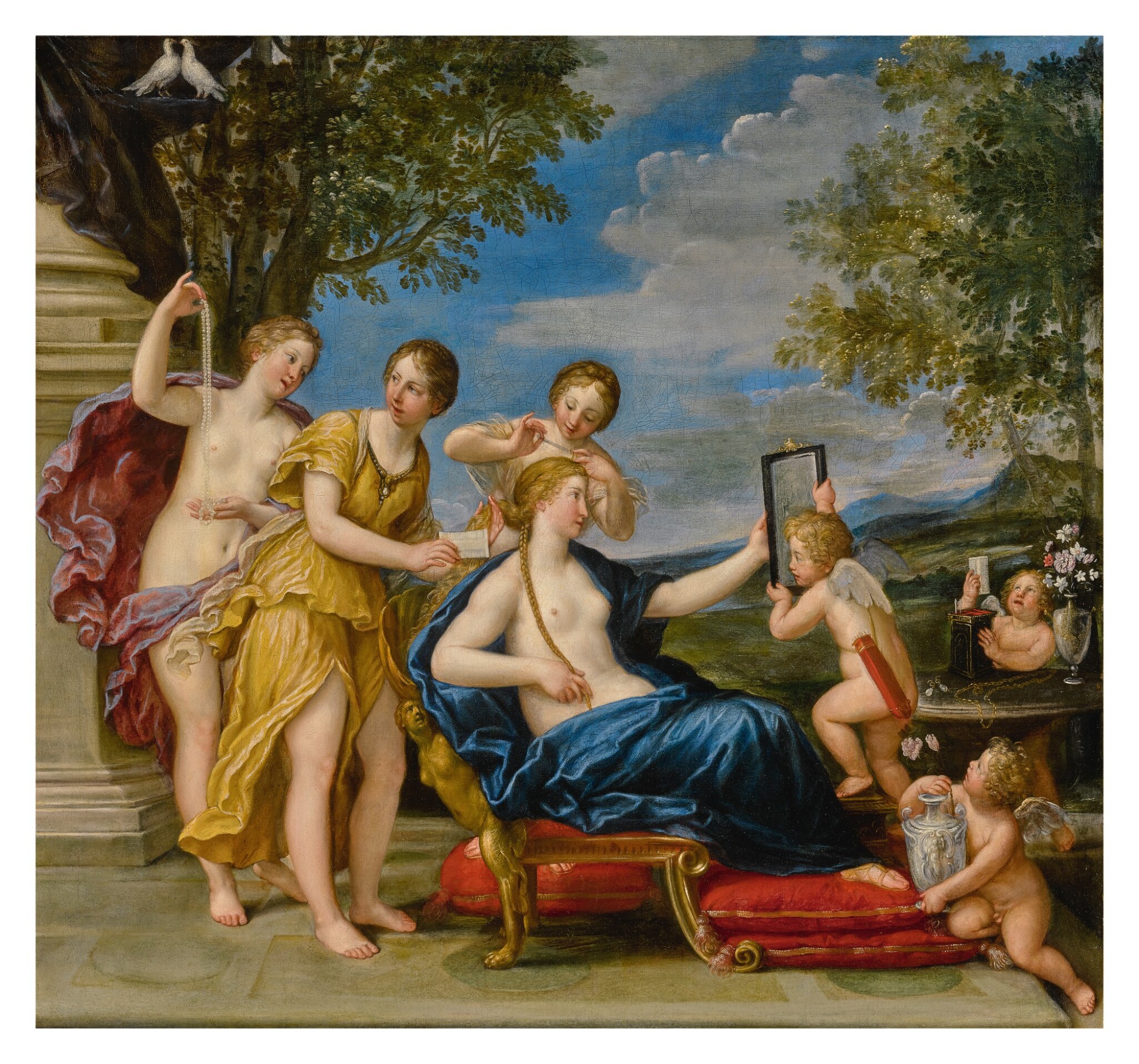 This work has a lining which is nicely stabilizing the paint layer. There are two visible horizontal lines that run through the doves in the upper left. These probably indicate that the canvas was folded around the stretcher at some point. This area was subsequently brought back to the surface, and the composition can now be seen as originally intended by the artist. The other three edges do not show any evidence of alteration.

Although much of the original color shows strongly under ultraviolet light, there are hardly any other retouches. All of the figures are in very good condition, showing only isolated restorations. No abrasion or weakness is apparent in the colored fabric. All of the faces are unretouched except for a small group of retouches around the mouth of Venus. There are a few retouches in the lower part of the forearm of the woman in the gold dress, and a few retouches beneath her arm. The left leg of the cupid holding the mirror has received retouches. There are retouches around the wrist of Venus, and to the left of her right breast. There are retouches in the maroon fabric beneath the arm of the figure on the far left.

In the sky, there are a few isolated spots of retouching. A pentiment of some kind has begun to reappear above the mirror, and has received retouches. In the marble column on the left and in the floor, retouches are mostly in the lower center beneath the chaise, and in the lower left corner.

The retouches are well applied, and the work should be hung in its current state.

Even during his lifetime, Francesco Albani's reputation was high not only in Italy but also outside, especially in France and England. In his brief life of the painter, written within forty years of Albani's death, the French critic Roger de Piles observed that '...as he [Albani] usually painted on a small scale, his paintings are scattered like precious gems throughout Europe. They have commanded a high price, especially recently. They have become very much in fashion, and being learned and enjoyable, they please everyone'.1 This particular composition perfectly reflects Albani's fame, for it was famous in all three countries, notably in France, where an expanded and adapted version of The Toilet of Venus formed part of the so-called ‘Louvre Cycle’, which entered the French Royal Collection as a purchase by Louis XIV in 1684.

In addition to the above mentioned Louvre prototype, a nearly contemporary variant of equal prominence is that which formed part of the Borghese Cycle, today in the Galleria Borghese, Rome (fig. 1). The present version of The Toilet of Venus is one of a number of the subject which Albani made at various points during his career, no doubt owing to the popular success of the Louvre and Borghese cycles.

The ultimate source of inspiration for Albani for the composition itself must be considered Annibale Carracci’s Venus adorned by the Graces (National Gallery of Art, Washington), a panel that Carracci, Albani’s teacher in Bologna, executed circa 1590-95.

We are grateful to Catherine Puglisi for endorsing the attribution to Albani, on the basis of photographs.