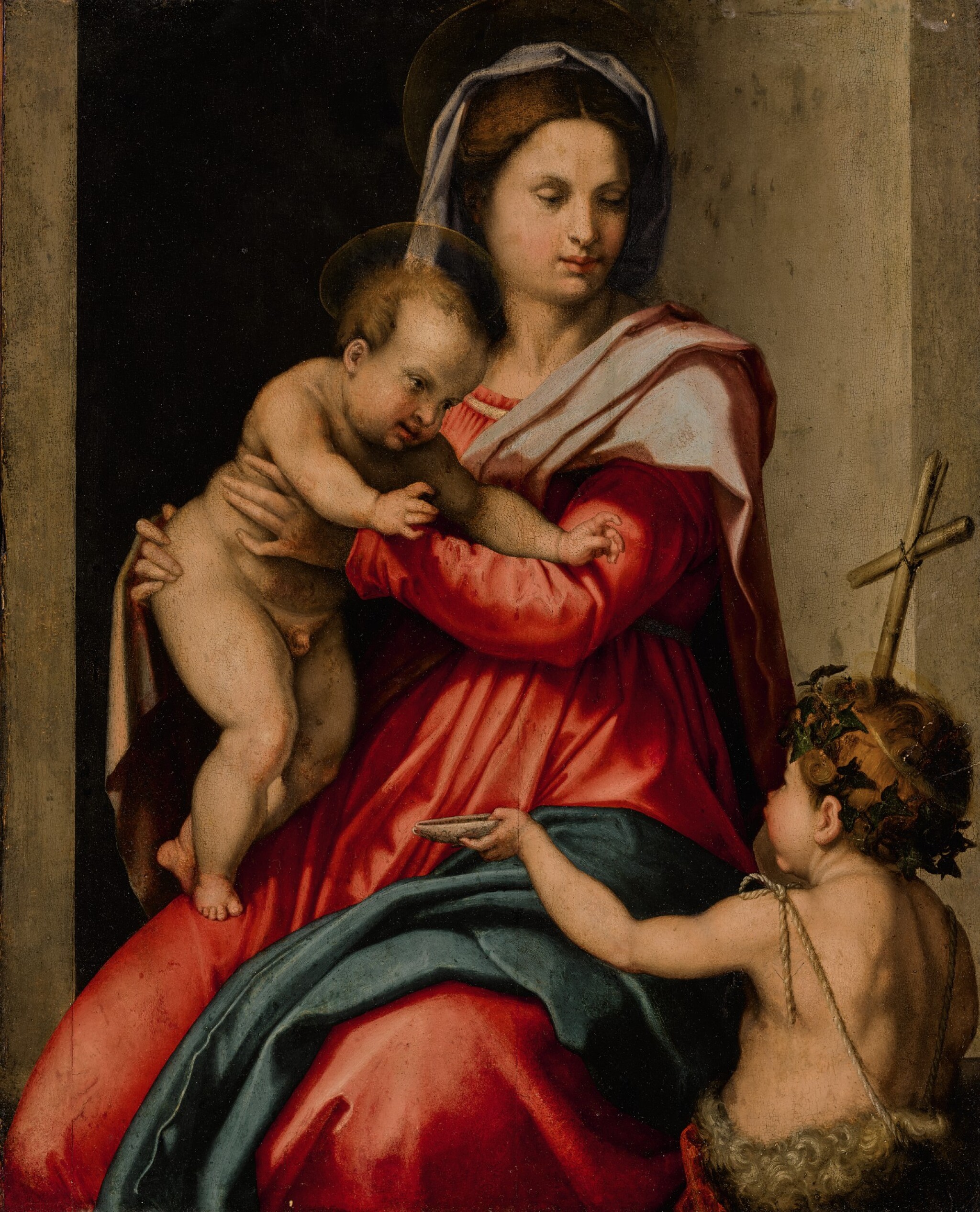 The panel consists of a single plank and is flat and stable. It is beveled on the right edge of the reverse and supported by 2 horizontal cross beams.The image reads well beneath a darkened varnish. Fan shaped cracking to the panel and to the paint layer at the right edge about 12 inches from bottom is visible to the naked eye. A small pigment loss is visible below St. John's arm. The paint layer has begun to blister in the upper right background, upper left background, and lower left in the shadow of Mary's cloak. Under UV inspection, a thick, milky varnish is difficult to read through but retouching is visible in scattered small spots of shadows, many of which are visible to the naked eye as discolored shadows. Further retouching beneath the varnish is obscured. We recommend consulting a professional restorer for advice on cleaning or restoration to this early 16th century work. Offered in a decoratively carved and painted black and giltwood frame.

Recovered by Monuments Officers and removed to the Munich Central Collecting Point (inventory no. 2480) and thereafter restituted to David Goldmann;

This charming devotional image is an early period copy of a lost composition by Andrea del Sarto. Motifs have also been derived from other extant autograph works by Andrea. The arrangement of the three figures is loosely based on Andrea's Madonna della Scala (1522, Museo del Prado, Madrid), in which the Madonna holds the infant Jesus standing on her lap, and he reaches out in the same way toward a kneeling angel.1 A later version in the North Carolina Museum of Art, likely painted with studio assistance, is closer to our painting in that it features the same three figures in a spare interior, though the Madonna lifts her veil with her right hand as she does in the Prado picture.2 The North Carolina painting has a more horizontal composition and a window in the background, and Jesus and St. John both hold onto St. John's cross. In the present painting, the Madonna embraces her son with both hands, and looks down at a sharper angle toward St. John, in accordance with the vertical composition. Here, St. John hands Jesus a shell, prefiguring the baptism he would perform on his cousin later in life, which is often depicted with St. John the Baptist using a shell to pour water over Christ's head.