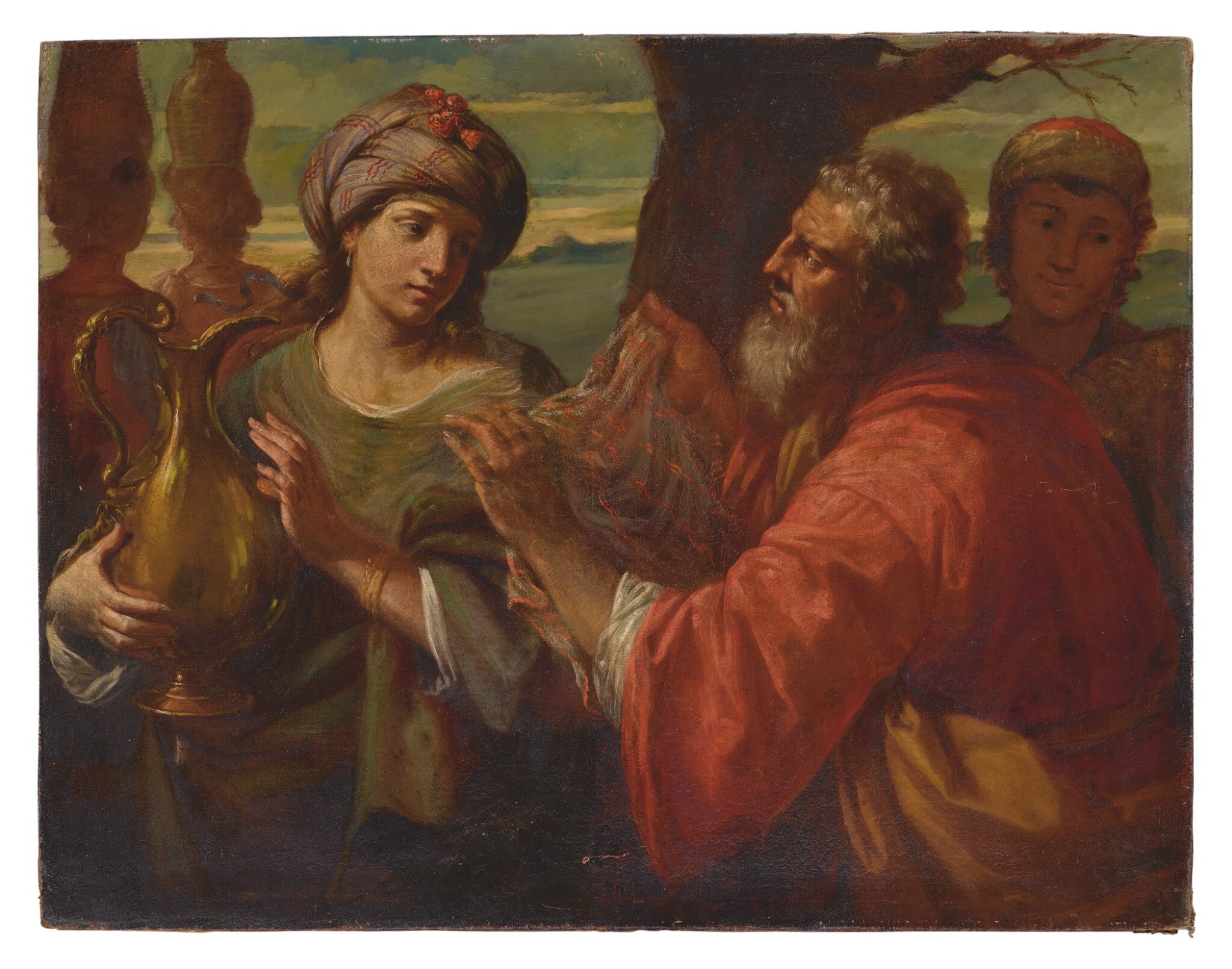 REBECCA AND ELIEZER AT THE WELL

Canvas is lined. The painting has two holes: one at bottom center that is less than 3 in. long, and another towards bottom left corner that is 1.5 in. long. Areas of repair scattered throughout, some of which are slightly warping like on the lady's headpiece at center. The aforementioned campaigns of repair fluoresce under UV along with some scattered spots of retouching like on the proper right cheek of the female figure. What appears to be a modern inscription of a series of numbers that is not visible to the naked eye fluoresces under UV. We would suggest consulting a restorer since this painting could benefit from treatment. Offered in a giltwood frame.

The life of the Bolognese artist Lorenzo Pasinelli was recorded by his student and biographer, Giampietro Zanotti (1674-1765).1 Pasinelli trained in the studio of Simone Cantarini, one of Guido Reni's most talented pupils, and at the same time studied at the Accademia del Disegno under Alessandro Tiarini, Francesco Albani, and Michele Desubleo. After Cantarini's death in 1648, Pasinelli joined the workshop of Flaminio Torri, and three years later set out to establish his own career, quickly building a reputation as one of the leading masters of Bologna, rivaled only by that of Carlo Cignani. Over the next few decades, he received numerous international commissions and ran a workshop that flourished until he closed it in 1698, two years before his death. Among his most prominent students were Giovanni Gioseffo dal Sole, Gian Antonio Burrini, Aureliano Milani, and Donato Creti.

Pasinelli’s narrative ability is evident in this painting which illustrates the moment when Eliezer asks Rebecca to quench his thirst with the water she drew from the well (Genesis 24:17). In the passage, Abraham sends his servant, Eliezer, to find a wife for his son Isaac, and during his journey, Eliezer prays that Isaac’s future wife would give water to him and his camels. Although Pasinelli omitted the camels from this painting, their presence is suggested through the two figures in the background carrying jars on their heads, who are likely Rebecca's maidens on their way to water them. Meanwhile, the elegant and sheer silk scarf Eliezer offers Rebecca in gratitude, foreshadows the proposal of marriage.

This was a subject that Pasinelli explored in other paintings as well, including one in a private collection, Bologna2 and another in the G.M.B. collection, Vignola.3 All three works share specific motifs, such as the maidens carrying jars in the background, the turbans of some figures, and the undulating jar Rebecca holds in her hands. The two paintings in Italian private collections, however, differ subtly from this painting, particularly in their representation of the story, for they explicitly show Eliezer drinking water from Rebecca's jar.

We are grateful to Professor Daniele Benati for suggesting the attribution to Lorenzo Pasinelli on the basis of photographs. He dates this painting to Pasinelli's younger years, circa 1657, given its stylistic connection to Cristo va con i Santi Padri a visitare la Madre in Chiesa di San Girolamo della Certosa, Bologna.4