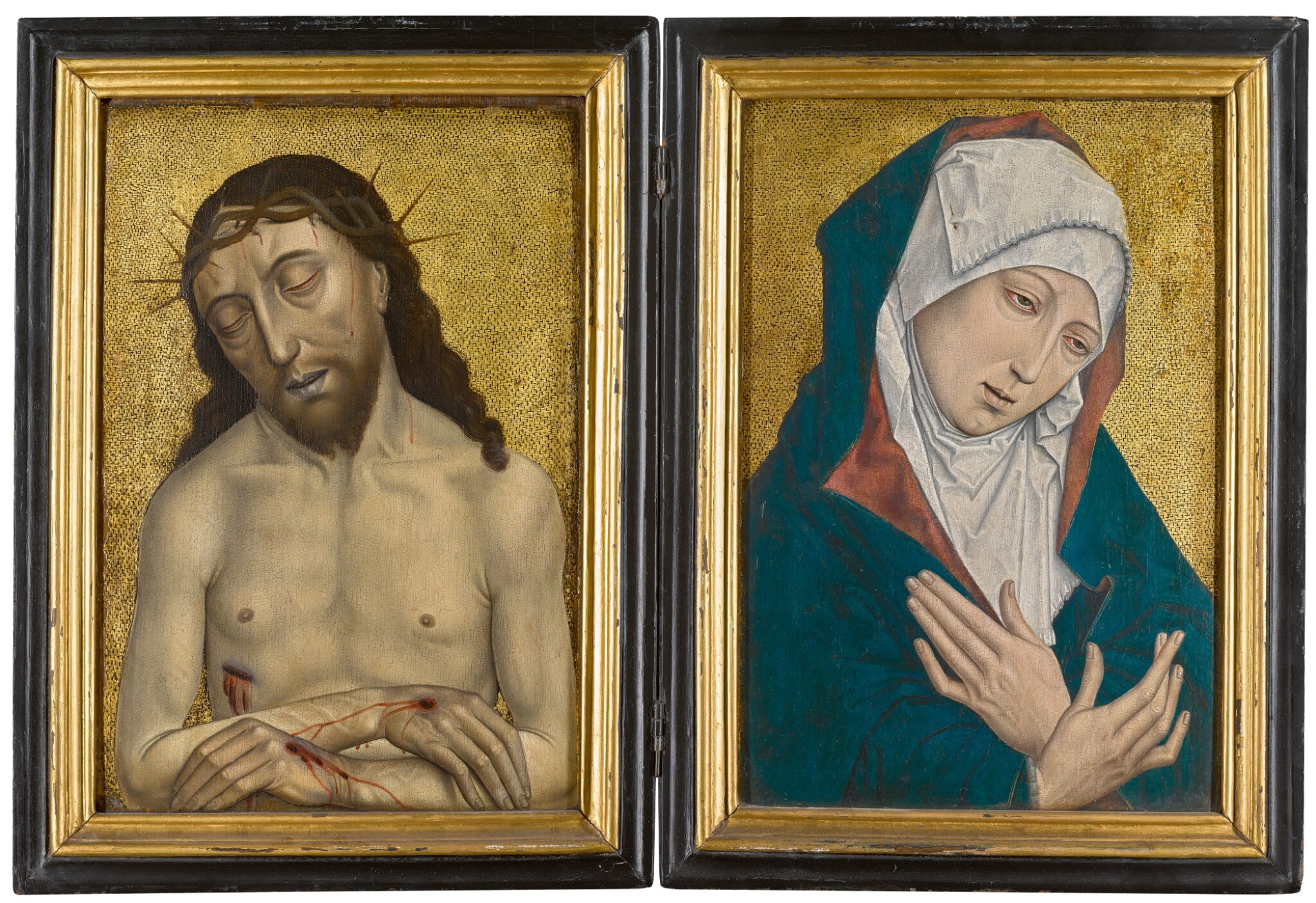 A DIPTYCH: MATER DOLOROSA; CHRIST AS THE MAN OF SORROWS

The panels of both parts of the diptych are made from a single plank, painted with black paint on the reverse, and are both stable and flat. The paint surface of both panels is well preserved and not abraded. However, both panels have undergone a comprehensive campaign of retouching. Under ultraviolet light inspection, extensive - albeit very finely applied - retouching is evident particularly to the face of the Virgin and her white headdress as well as to her hands. The body of Christ has numerous finely applied retouchings running predominantly along the vertical lines of the wood grain, with a smaller amount of retouching to the lower part of His face. Despite the extent of the retouching, the overall appearance of both panels is very good and the overall condition is good for panels of this age. Held in a simple, wooden, painted, hinged diptych frame - old, but probably not original.

These panels are derived from Simon Marmion's prime examples of 1460, in the collection of The Museum of Fine Arts, Strasbourg.1

The Imagery of the Man of Sorrows first emerged as part of the production of Byzantine icons during the 12th century, based on a passage from Isaiah, in the Old Testament. The Sorrowful Christ, known as Akra Tapeinosis (Utmost Humiliation), was depicted with the head reclining on one side, closed eyes and hands crossed revealing the nail wounds, and was often flanked on His left by a Mourning Virgin, who witnessed His Passion.

From then on the production of icons increased rapidly, and through the mercantile trade with Crete these devotional objects travelled as gifts, souvenirs and stolen goods, to reach Flanders, in Northern Europe, where they eventually started to be collected and copied. Particularly during the second half of the fifteenth century, icons were associated with the rising of the Devotio Moderna, which urged a more emphatic devotion and identification of the devotee with the physical suffering of Christ.

As such a vast number of these objects was produced during this time, the representations of the Man of Sorrows and Mourning Virgin were interpreted in many different ways. The use of oil as a medium, so favoured in the North, also aided artists in adapting their style to the visual requirements of the Devotio Moderna, enabling a more realistic representation of details such as the blood weeping from Christ’s wounds and the Crown of Thorns, as well as the tears running down the Virgin’s cheeks. Artists such as Dieric and Aelbert Bouts and Simon Marmion excelled in the production of these devotional panels, which were soon copied within their workshops and by their followers.

This diptych, by a follower of Simon Marmion, is a high-quality version derived from Marmion's prime example of 1460, today in the collection of The Museum of Fine Arts, Strasbourg. Incorrectly conjoined in 19th century engaged frames, this diptych would originally have seen the Virgin flanking the image of Christ on the left, engaging directly with her son and interceding for the devotee. Compared to other specimens of this type, the diptych is a faithful interpretation of the Byzantine iconography of the Man of Sorrows with the eyes semi-closed in acceptance of His suffering, the head bending on the left and hands crossing showing the blood flowing through the arms, almost touching the frame of the panel to enhance the proximity of Christ to the devotee. Furthermore, both panels show the mastery of the artist in the detailed depiction of Christ’s flesh, as well as the Virgin’s garments and veil, which fall in crisp folds. Finally, the gold background of these works enhance the images’ original function as icons.