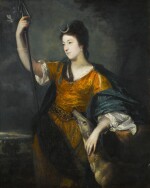 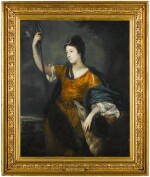 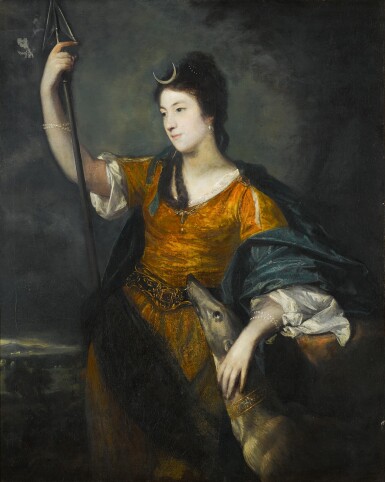 The painting has an old, loose lining, the paint surface is slightly dirty, and the varnish is quite thick and discoloured. Some of the pigments have bitumenised slightly in the lower part of the figure's drapery. There is also a patch of discoloured varnish in the upper left corner, perhaps where something once adhered to the surface. Inspection under ultraviolet light reveals the opaque varnish. Some retouching is visible on its surface: in an area in the background to the left of the sitter's right leg (approx. 6 x 2 cm.); fine lines to disguise the network of craquelure in her face, lower hand and white drapery; to a small area in the top of her hair; and to three small scratches, two in the dog's head and one in its body. There are also small retouchings scattered throughout the background. Older retouchings, more difficult to discern beneath the varnish, occur in the sitter's index finger of her right hand, and in some of the folds of her drapery. The painting will benefit greatly from cleaning and some attention, but is in overall fairly good condition.

Birmingham, City of Birmingham Museum and Art Gallery, Exhibition of works by Sir Joshua Reynolds, 1961, no. 15

The sitter was the youngest daughter of Thomas Fermor, 1st Earl of Pomfret (1698–1753) and his wife Henrietta Louisa Jeffreys (grand-daughter of the famous Judge Jeffreys). In 1754 she married Thomas Dawson, later 1st Viscount Cremorne, the eldest surviving son of Richard Dawson of Dawson Grove (now known as Dartrey Forest) in County Monaghan, and his wife, Elizabeth, daughter of John Vesey, Archbishop of Tuam. Dawson represented County Monaghan in the Irish House of Commons and was one of the largest landowners in Ireland. She died at Castle Dawson, in 1769, and was buried at Ematris, County Monaghan.

Painted circa 1754, Mannings suggests that the pose and costume here were perhaps inspired by Allan Ramsay’s Portrait of Lady Boyd as Diana, which was engraved by McArdell in 1749, whilst Waterhouse saw this picture as an exercise in the style of Batoni. Aileen Ribero identified the dress as masquerade costume based on that seen in seventeenth-century paintings, particularly those by Sir Peter Lely. However, Reynolds has adapted it so that the sitter’s loose gown conforms to contemporary fashion, with the addition of a wide jewelled belt, which probably belonged to the sitter, to achieve a waisted look.

The prominent Irish engraver James McArdell’s 1754 mezzotint is one of the earliest engravings after a painting by Reynolds and established the early popularity and fame of this painting. The artist revisited and adapted the composition almost a decade later in another portrait of a lady as Diana, which has mistakenly also been called Lady Anne Dawson in the past;1 and he portrayed the Duchess of Manchester in a similar costume, together with her son as Cupid, in the late 1760s.2