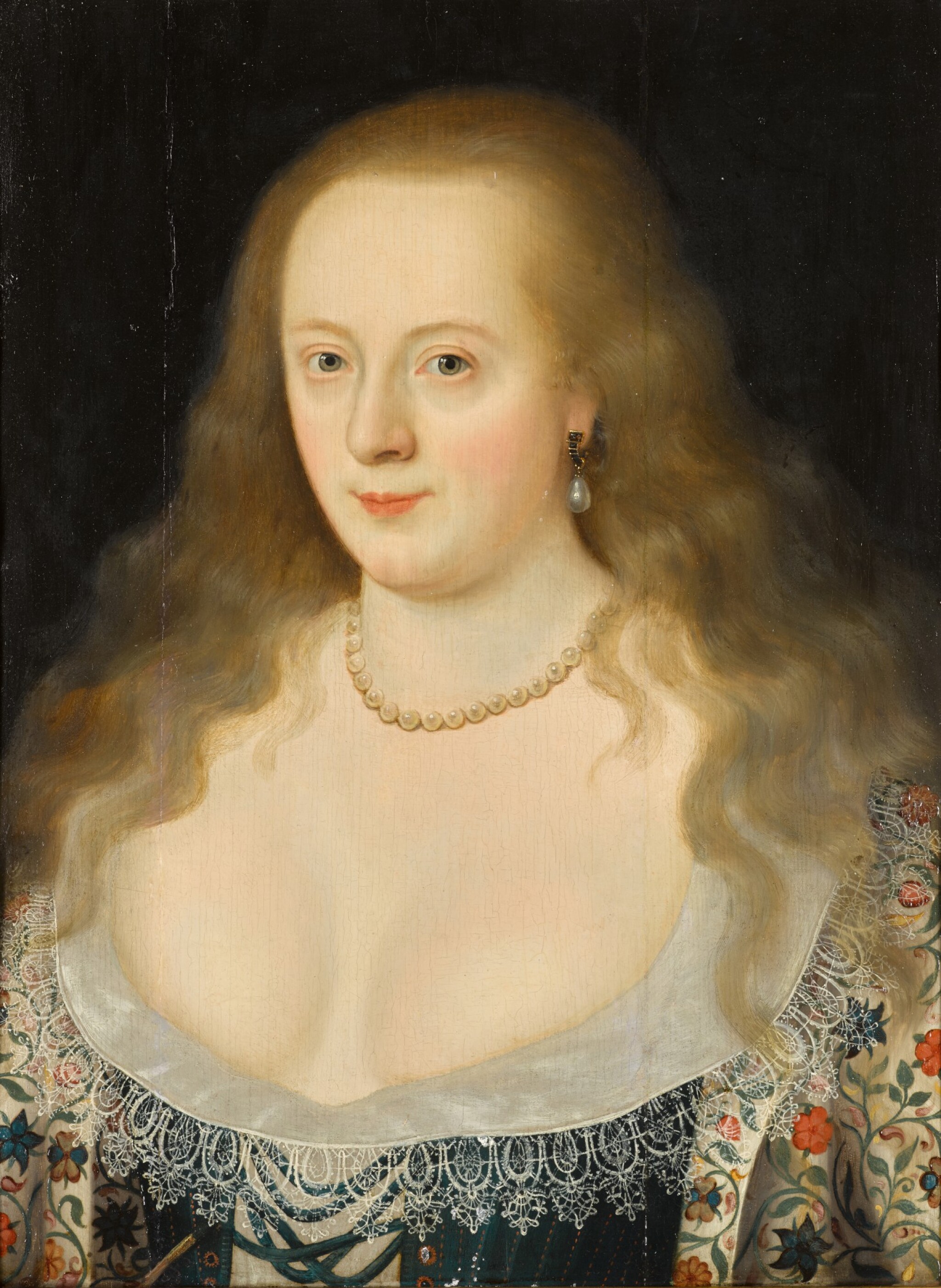 The panel is uncradled and very slightly bowed. Two vertical joins or splits run the length of the panel either side of the sitter's face, and fine lines of associated retouching are visible to the naked eye. There are a couple of what appear to be pin-prick scuffs in the sitter's jawline, and likewise a handful of small surface scuffs in the centre of the lower margin. Inspection under ultraviolet light confirms the aforementioned lines of retouching, as well as some retouching in the upper half of the left-hand margin. An older campaign of retouching is also revealed, comprised of very fine lines of retouching through the sitter's face and chest to disguise the appearance of craquelure. There are also some fine lines of strengthening along the upper edge of her white collar.

The Trustees of the Savernake Estate, Savernake Forest, Marlborough;

Frances Howard was the daughter of Thomas Howard, 1st Viscount Howard of Bindon, and his wife, Mabel Burton. She was famed for her beauty and her lineage, had many suitors, and married three times. Her first husband was Henry Pranell (d. 1599), a rich wine merchant. Her second husband was Edward Seymour, 1st Earl of Hertford (1537–1621); following this marriage, such was the anguish felt by a rival for her hand, Sir George Rodney, that he wrote Frances a dying love song with his own blood before falling upon his sword. It is also recorded that Hertford would tease his wife on account of the pride she felt for her distinguished ancestry (her father was the son of Thomas, 3rd Duke of Norfolk, and grandson of Edward, 3rd Duke of Buckingham), and would tap her on the cheek, saying: 'Frank! Frank! how long is it since you married the vintner?'

Frances married Ludovic Stuart, 2nd Duke of Lennox (1574–1624), just over two months after her second husband's death in 1621. His being created 1st Duke of Richmond and Lennox in 1623 earned Frances the nickname of the 'Double Duchess.' When she died in 1639, her will expressed her wish to be buried at Westminster Abbey next to her third husband, 'whose matchles memory and faire deedes to me shall ever live with me to the uttermost of affection and dutie, whiles I breath on earth.'

Another version of this portrait is at Compton Verney, Warwickshire, depicting the sitter wearing a similarly embroidered and low-cut dress, with a pearl necklace bearing a pendant of a heart and half moon, symbols associated with the Lennox family.1 Sir Anthony Van Dyck also portrayed the sitter, in 1633, in mourning for her third husband, a miniature of whom is pinned to her breast, and whose Lord Steward's staff of office she holds in a black case. The original painting is lost, but is recorded in versions such as that, most probably painted in Van Dyck's studio, which was sold in these Rooms, 22 March 2000, lot 46.2