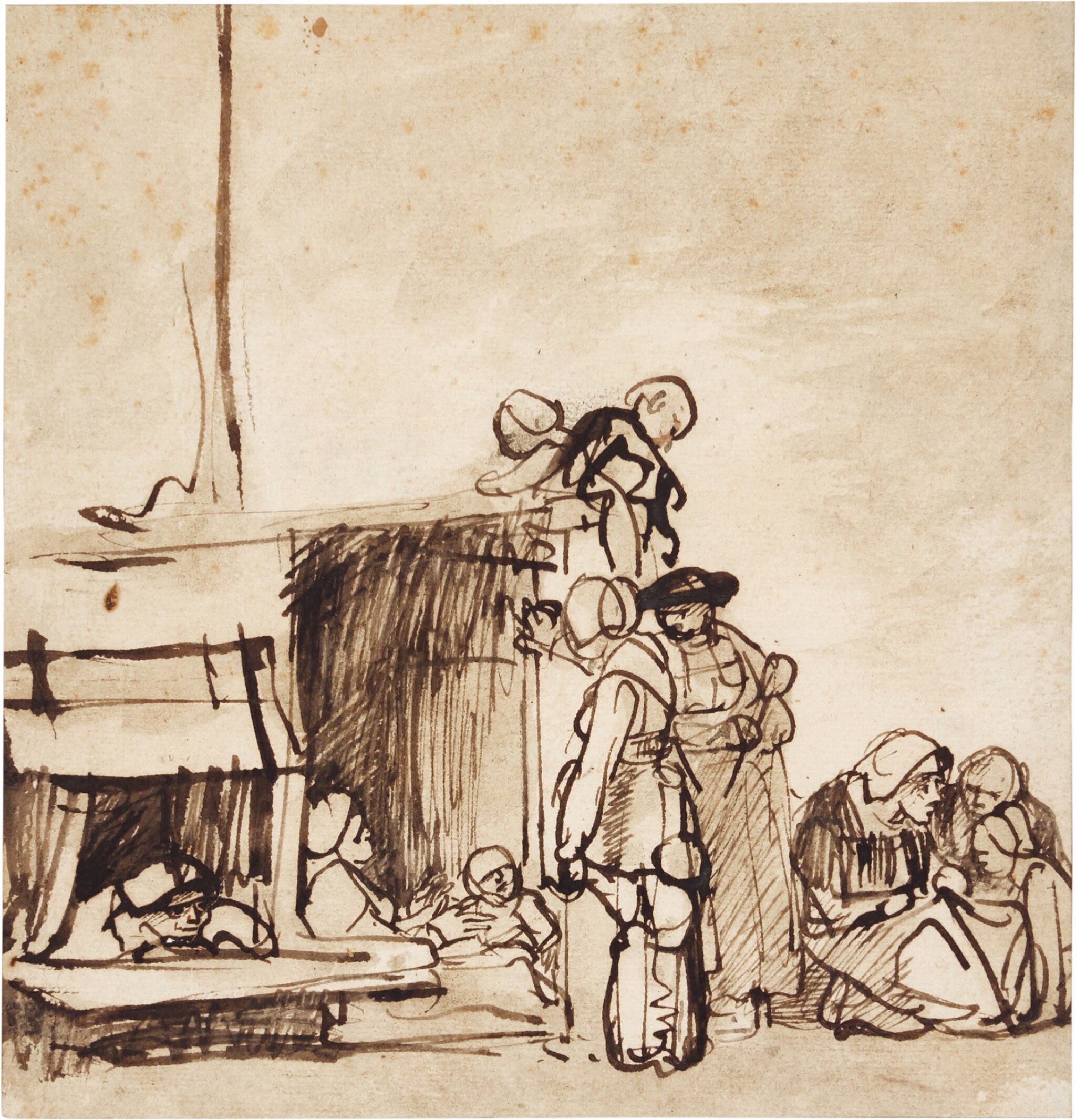 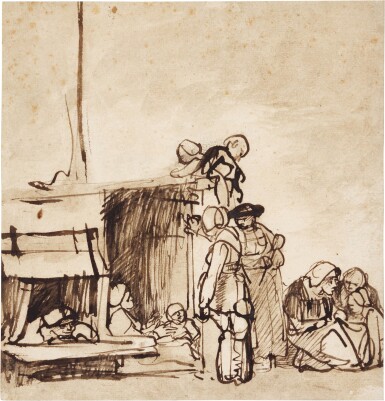 PEASANTS GATHERED OUTSIDE A HUT

Pen and brown ink and wash

Overall condition of sheet and ink reasonably good and strong, except for two places where ink has eaten into the paper (under chin of bottom left figure, and in hat of standing woman facing forward, in centre). Some light foxing, especially towards top of sheet. Paper somewhat thin in bottom corners. Drawing is window mounted with brown paper adhesive strip around all four sides, verso.

by inheritance to the present owners

Stylistically, this impressive drawing is characterised by an unusual combination of extremely broad outlines, powerfully drawn with rapid, sweeping strokes of the pen, contrasting with a network of rather finely drawn, repeated hatchings. The figures are boldly delineated, almost caricatural in places, with distinctive features such as the indication of eyebrows through a single, horizontal penstroke. These features led Werner Sumowski, who first published the drawing, to endorse, if with some hesitation, the traditional attribution to Nicolaes Maes, but Peter Schatborn and other leading scholars of Rembrandt school drawings have now kindly confirmed that they believe it can be better attributed to Rembrandt's highly talented, somewhat enigmatic, and famously short-lived pupil, Carel Fabritius.

For some years, Schatborn has been assembling a group of stylistically consistent drawings, very comparable to this, which he attributes to Fabritius, and in 2006 he published a core group of drawings, together with his detailed arguments in favour of the attribution.1 Particularly comparable to this drawing are the Rijksmuseum’s Messenger Presenting Saul’s Crown to David, and The Twelve-Year-Old Jesus in the Temple, in Winterthur.2

Schatborn has also observed that this drawing, as a genre scene, adds another dimension to the Fabritius group he has so far published, which contained only representations of religious subjects, but Holm Bevers has proposed that other genre drawings in Berlin and Munich are by the same hand, and should likewise be considered the work of Carel Fabritius.3

Although it is not known precisely when Fabritius studied with Rembrandt, it must have been around 1641-43.4 The stylistic qualities that we see here are clearly influenced by Rembrandt's drawings of that time, but are also highly personal and distinctive - as one would expect, considering how original Fabritius was as a painter. As his drawing style comes, in turn, to be defined, it is very exciting to see a clear graphic personality emerging, and the addition of the present drawing to the small group that can now be attributed to Fabritius further enriches our understanding of the drawings of this remarkable artist.

Albin Schram (1926-2005) was a voracious but discerning collector of works on paper and autograph documents. The story goes that his fascination with these records of human interactions and artistic creation was sparked when his mother presented him with a romantic letter from Napoleon Bonaparte to his future wife Josephine de Beauharnais, attempting to patch up an argument. The superb collection of late 19th and early 20th century works on paper from the Schram collection, including drawings by artists such as Camille Pissarro, Edgar Degas, August Macke, Emil Nolde and Alfred Kubin, was sold at Sotheby's last month, under the title: The Artist's Sketchbook: Where Inspiration finds Form.