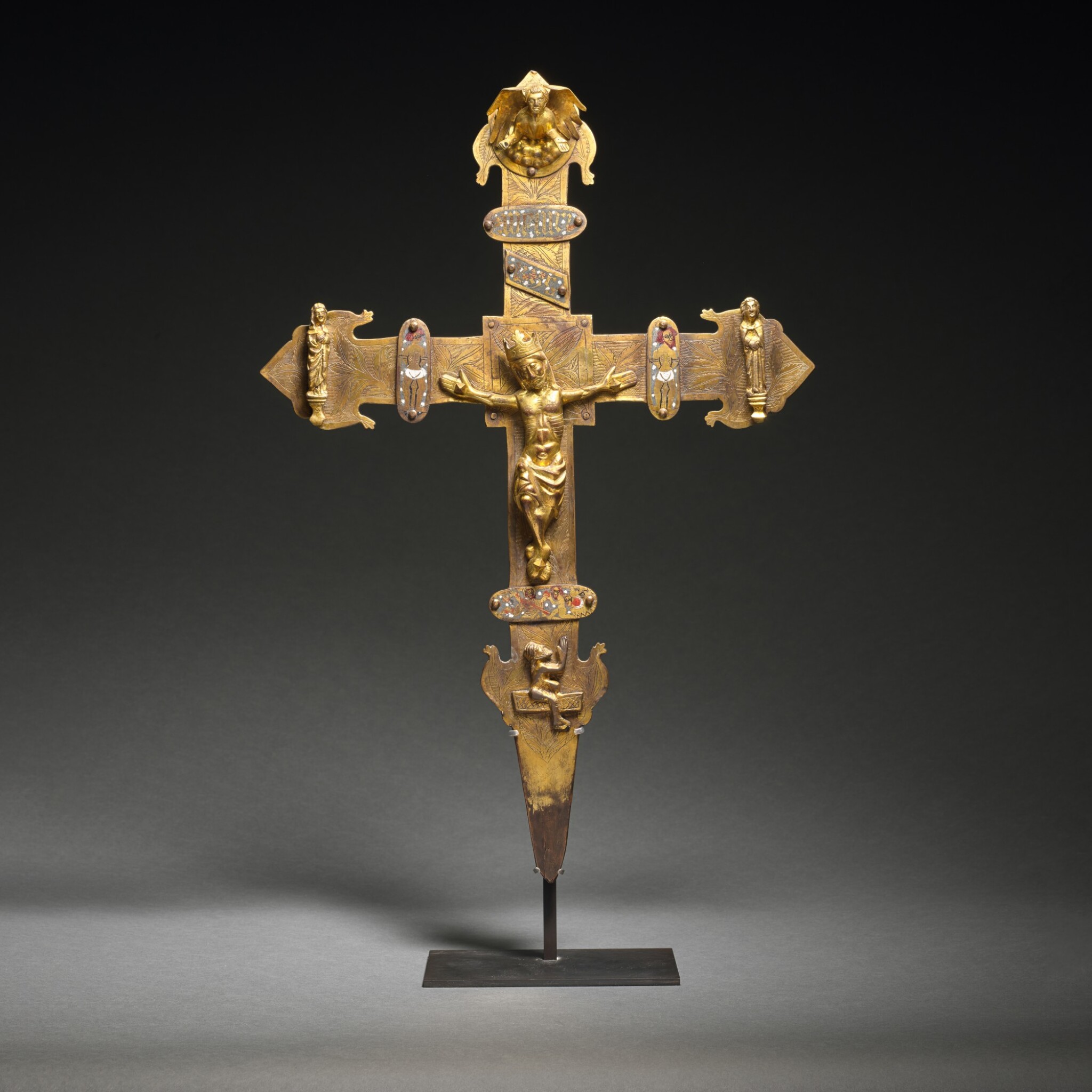 Overall the condition is good with some wear and dirt to the surface consistent with age. There is wear to the gilding, including tarnishing, throughout. There is minor wear to the enamel. Some rubbing to the high points of the Corpus figure. The appliques appear to be original, but it is possibly the Angel at the top may be later. The Angel's attribute is lost. There is some warping to the cross and in other areas including the wings of the angels at the top. Several minor nicks and scratches.

Please note that the previously stated Provenance and Literature references are incorrect.

This fine and well preserved cross is one of an important group of Spanish processional crosses from northern Spain which are believed to herald from one centre of production, most likely Burgos (see Barron Garcia, op. cit., pp. 366-398; Martin Vaquero, op. cit., pp 434-437, 790-795; Thoby, op. cit., pp. 77-78). The production started in around 1350 and continued until around 1520. Within that group there are smaller groups with their own stylistic peculiarities. The present cross compares closely to a small group which are so close in style one can assume they came from the same workshop. These Spanish crosses are always composed of copper, with four arms of equal length, incised on both faces with large foliate decoration, the finials of each arms forming fleur-de-lis, with a square panel at the crux of the cross often with a Maltese cross whose branches are separated by spaces in the incised foliage, as found here, beneath the corpus. The Christ is cast bronze and generally of the fourteenth century type according to Thoby’s classification: feet crossed, arms lifted. Figures of the Virgin and Saint John on the arm finials, standing on socles, as seen here. On the finial of the lower arm there is normally the figure of Adam turning as he steps out of his tomb lifting his arms in prayer towards the Saviour, as seen here. As is common to most of the group, there are oval enamel plaques representing the thieves on the horizontal arms, their hands tied behind their backs, their bodies incised and enamelled, wearing short perizonia in white enamel against a blue ground with white highlighted dots. See for close comparison an example published in Oman, op. cit., pl. 34, figs. 61-62. Typical too are the inscriptions which are often indecipherable or incomplete, differing from the Limoges counterparts, and, on the back the foliate ornament in reserve on an ornamental ground, with typically, the four animals of the Evangelists and a central plaque square representing Christ in Majesty, sometimes simply engraved sometimes engraved and niello and sometimes with enamel. Perhaps the closest comparison can be found in the processional cross from Uzquiano, Iglesia de la Asunción, of the fourteenth-fifteenth century (published in Martin Vaquero, op. cit., p. 435, no. 14, pls. 25-30). This cross in turn, as Martin Vaquero points out, can be compared with other works from Burgos such as the cross of Villanueva de Carazo (Burgos) or the Caloca (Cantabria). These works are very similar in terms of the subjects represented. Other examples can be found in Madrid, El Museo Nacional de Artes Decorativas, Nantes, Musée Dobréee, Manche, Madrid, Instituto Valencia de Don Juan, Chartres, Musée municipal, and in Bourges, Musée du Berry.

These crosses have features in common with crosses produced in France in the period. The fleur-de-lis finials for example, which appeared in the thirteenth century but were more frequent in the fourteenth century, are typical of the Spanish crosses but can also be found in French examples. There is one example in the musée du Moulins, another in the church of Barriac-les-Bosquets (Cantal) and one in Paris, musée de Cluny (inv. no. cl. 14860; Taburet-Delahaye, op. cit., no. 54, pp, 146-148). Like the Limoges crosses, on the Spanish examples, enamel decoration has given way to incised gilded ornament. The cast Christ has a long face and protruding eyes, and wears a crown, His feet crossed, and the figures of the Virgin and Saint John on either side.