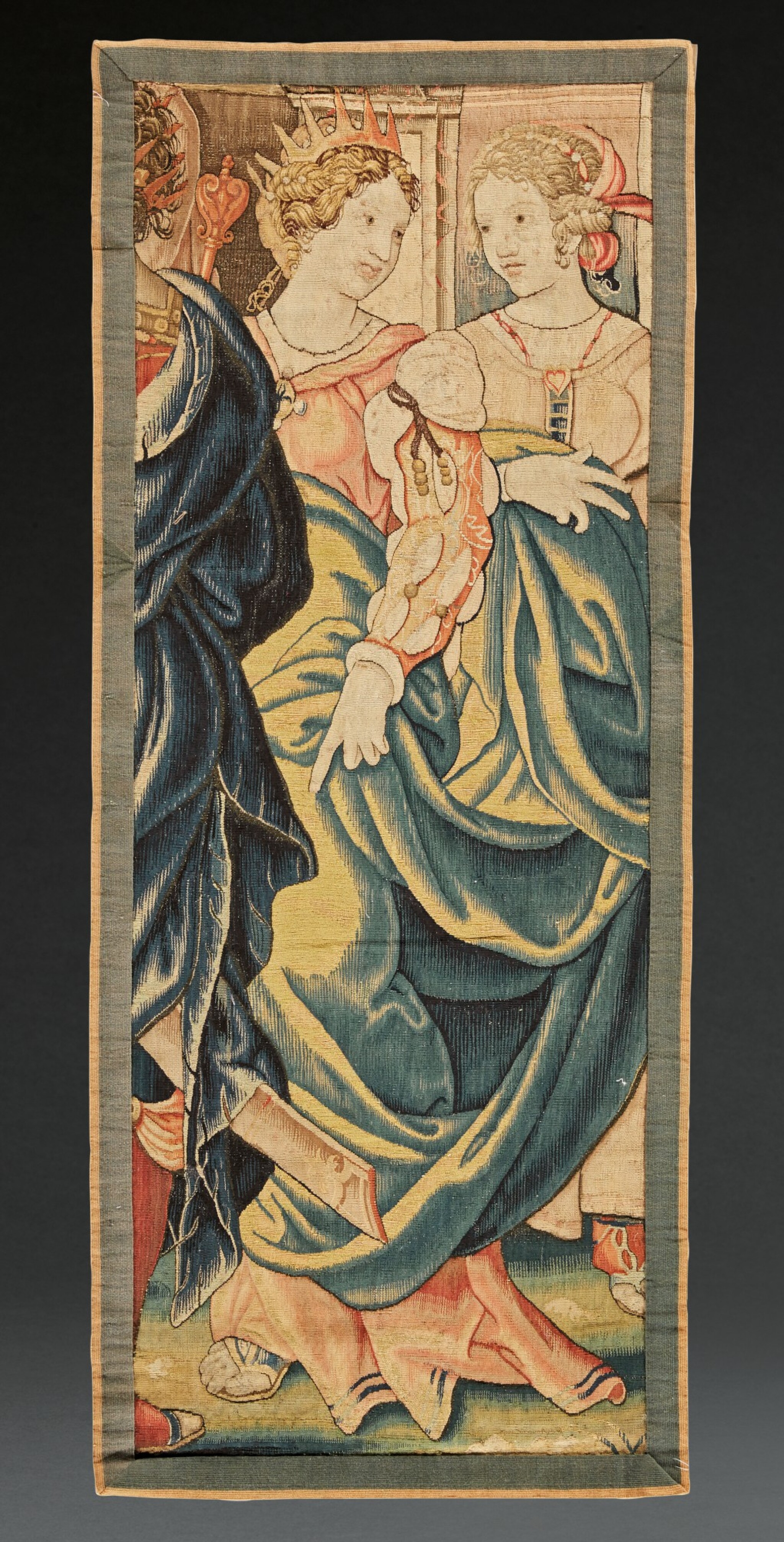 Tapestry fragment with a mythological scene, possibly from The Marriage of Cephalus and Procris

woven, tapestry technique, wool and silk, with a linen lining

woven with crowned female figure (possibly Procris) and her companion, and the reverse side of male crowned figure (either Cephalus or his father Aeolus) with what appears to be a curaiss and indigo cloak, and holding a form of sceptre

Reverse with linen lining. Both strips of Velcro attached across the top, for hanging purposes. Fading of colours overall, commensurate with age. Some small repairs to the oxidised dark browns, and to the outline of the faces. Repair to eyes, to enhance definition. Later banded outer selvedge applied to four edges.

The story of Cephalus and Procris, from Ovid’s Metamorphoses (VII, 672), was popularised by the play Aurora by Niccolo da Correggio, performed in Ferrara in 1487, and presented the cautionary tale against marital jealousy. For comparable weaving and compositional detail style, see a weaving of The Marriage of Cephalus and Procris from a set of six tapestries from the series, The Story of Cephalus and Procris, Brussels, circa 1530 (Città del Vaticano, Musei e Gallerie Pontificie: Inv. Nos. 383-39). The panel of the marriage (Inv. 3838: approximately 355 by 355cm) has large figures dominating the composition, with the temple in the background, and has an outer floral and fruiting border. This set, in Italianate style, is considered to be identical or related to a series acquired by Ferrante Gonzaga (1507-1557), on either the occasion of his marriage to Isabella of Capua, in 1534 or that of their daughter Ippolita Gonzaga to Fabrizio Colonna, in 1549. The Cephalus and Procris tale was composed into a stage play of seven scenes by Cesar II Gonzaga (1592-1632), so clearly known to the Gonzaga family. The designs (sketches and models) for the tapestry series, possibly after Perino del Vaga, may well have been sent to Brussels, for enlargement by the painter Tommaso de Bologna, to be woven by a major Brussels workshop. The 1530s were a particularly successful period of creative cross-influences in tapestry design between Italy and the Southern Netherlands.