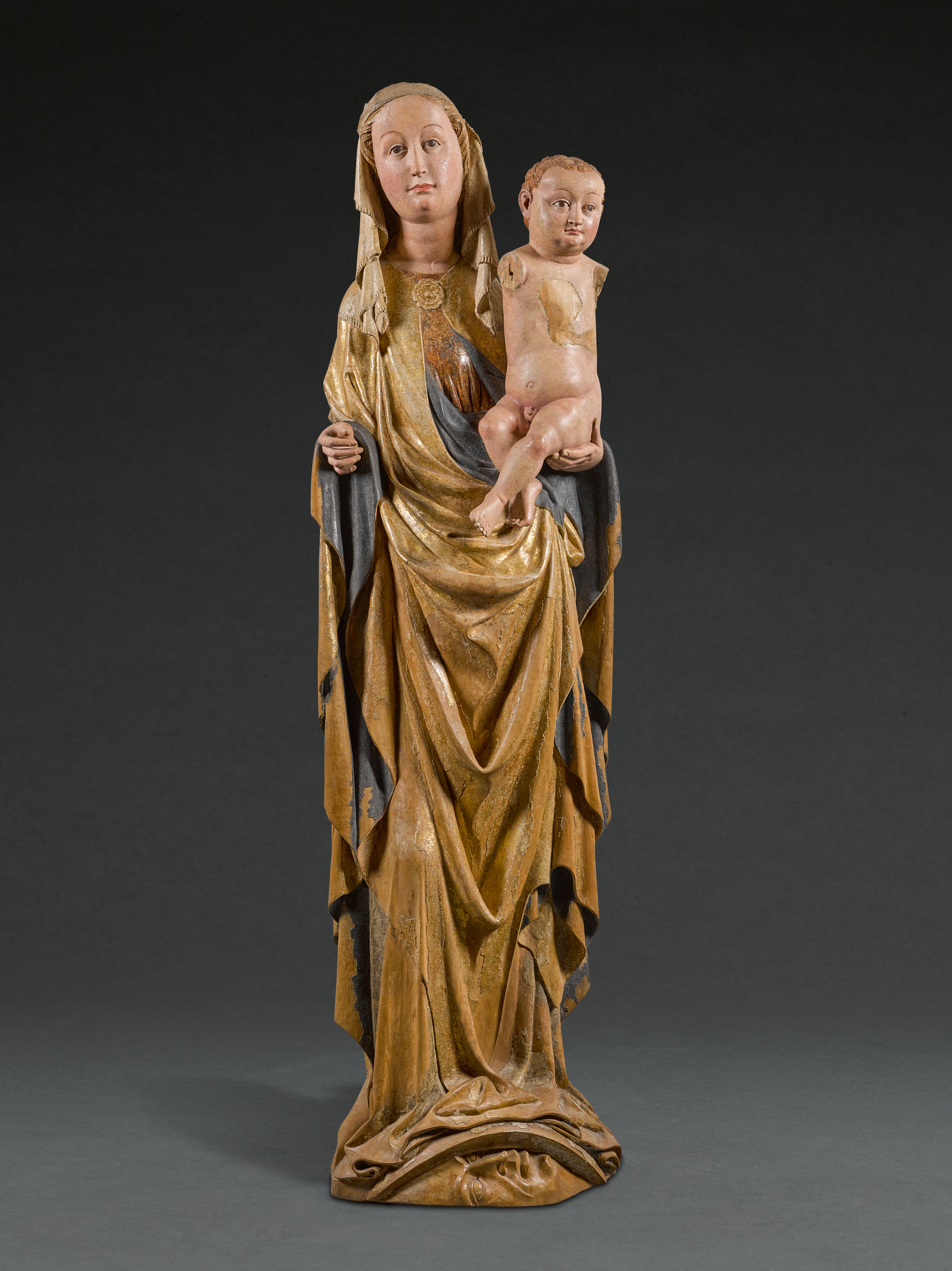 The Child's arms are lost. Otherwise the condition of the sculpture is good considering its age, with minor surface wear and dirt. The Virgin would have worn a now-lost crown. Her proper right hand is a later replacement. The face of the crescent moon at the bottom may possibly have been re-carved. The gilding and polychromy appear to be partially original or at least of an early date, though it is likely that the blue and the skin tones have been refreshed. There are losses to the gilding and polychromy exposing the wood underneath, notably to the Child's chest and to the Virgin's drapery in the bottom half of the composition, as well as at the sides. There is minor craquelure to the gilding and polychromy throughout. There is evidence of past worming, notably around the bottom and most visible at the back and at the underside. There appears to be a joint around the Christ Child's proper left ankle.

The Schöner Stil (Beautiful Style) was a distinctive artistic movement that emerged in Europe around 1400. Throughout the continent, artists departed from the generally more expressive style of the 14th century and introduced a more refined language. It focused on decorative effects which were intended to evoke a fairy-tale environment for the viewer. Graceful silhouettes, a serene charm, and an elegant drapery style characterised by sinuous cascading folds became the hallmarks of the style, as exemplified in this impressive, life-size Virgin and Child on a Crescent Moon.

It was the House of Luxemburg, the ruling family of Bohemia, that gave rise to the prototypes for Schöne Madonnen (Beautiful Madonnas): the statues of the Virgin and Child from Krumlau, Pilzen and Altenmarkt. Their grace was achieved through a set of stylistic traits that would come to influence sculpture throughout Europe. The Virgin was represented with a contrapposto supporting a usually very lively Child on her hip with both hands. Swathes of drapery suspended from one or both arms were given volume and lightness by arranging them in zig-zag folds. Lastly, both the Virgin and the Child have an expression and physiognomy with a somewhat grave sweetness, lending to the figures the noble air for which the Beautiful Madonnas have become so well known.

The present Virgin is distinguished by her elegantly slender, elongated forms, with only a hint of the S-curve contrapposto that is so pronounced in the Schöne Madonna prototypes from Bohemia. In this aspect, as well as the fluidly cascading folds of drapery of her headdress and mantle, she is reminiscent of the life-size Virgin and Child from the Carmelite Monastery in Cracow, illustrated in Legner, op. cit., p. 488, a Silesian work of circa 1380-1390 under Bohemian influence. Further comparisons can be made with early 14th-century Silesian Madonnas, particularly one formerly in the Simon Collection, Berlin (Braune and Wiese, op. cit., no. 57). The present Virgin's slender proportions and drapery scheme find another close parallel in a Virgin and Child offered at Sotheby's London on 8 July 1998 (lot 24) and catalogued as Silesian based on the same comparisons; note also the similarity between the Virgins' facial features, with round cheeks, a small mouth and a long, thin bridge of the nose. While it is relatively rare for Madonnas of this period to be depicted on a crescent moon, an early 14th-century Silesian Madonna on a closely comparable crescent moon, with pronounced human features, is illustrated in Braune and Wiese, op. cit. (no. 55).

While this indicates a Silesian origin of the present Madonna, under Bohemian influence, it is nonetheless possible that the sculpture originated in Bohemia itself. The faces of both Virgin and Child, and the Child's plump, elongated torso, find another striking comparison in an enthroned Virgin and Child, dated before 1420, in the Church of Our Lady before Týn in Prague (Legner, op. cit., pp. 697-698). Unlike most Schöne Madonnen, the Prague group is further analogous in the Virgin and Child's direct gaze out towards the viewer, a feature which makes the present Madonna a particularly beautiful and engaging example of her kind.

The present sculpture is accompanied by a Radiocarbon Dating Measurement Report prepared by Jill Walker for RCD Lockinge, which states that the wood from the sample dates between AD 1286 and 1396 (95% confidence interval).